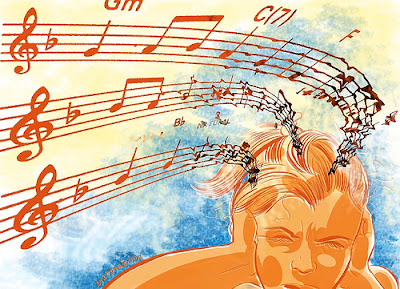 1) The medical term for the inability to hear music is amusia.  As Jamie explained to Claire in THE FIERY CROSS:


“I hear no music but the sound of drums,” he said simply. “I’ve the rhythm of it still, but the tune is gone."

This phenomenon has been recognized since the early 19th century.  According to Wikipedia:


In 1825, F. Gall mentioned a "musical organ" in a specific region of the human brain that could be spared or disrupted after a traumatic event resulting in brain damage. In 1865, Jean-Baptiste Bouillaud described the first series of cases that involved the loss of music abilities that were due to brain injury.

In this video, Dr. Oliver Sacks talks about what it feels like to live with amusia.  And here's an article with more information. 2) A marlinspike (also known as a fid) is a device for tightening and loosening knots in the ropes on a sailing ship.  Here are a couple of examples.  The top photo shows a marlinspike made of whalebone, from New England circa 1840.  The bottom photo is from Wikipedia.

It sounds like a very useful item, especially when you consider how difficult it would be to disentangle wet, tightly knotted ropes on a ship at sea!  And in a pinch, it might be used as a weapon:


A piece of wood showed among the rubble on the desk, the blunt end of a marlinespike.

[Bonnet] frowned, attention fastened momentarily on a knot in the string. She took two long steps and seized the marlinespike, yanking it off the desk in a shower of rubbish and clanging oddments.

"Stand back." She held the thing like a baseball bat, gripped in both hands. Sweat streamed down the hollow of her back, but her hands felt cold and her face went hot and cold and hot again, ripples of heat and terror rolling down her skin.

Bonnet looked at her as though she had gone mad.

"Whatever will ye be after doing with that, woman?" He left off fiddling with his shirt and took a step toward her. She took one back, raising the club.


Most marlinspikes are 6 to 12 inches long, but may reach 2 feet and more for working heavy cables and rodes. They are usually made from iron or steel, whereas fids, similar in shape and function, are formed from wood or bone.

Bonus fun fact:  the fish known as a marlin (which you may remember from Hemingway's THE OLD MAN AND THE SEA) actually got its name from the marlinspike.

3) This is a portrait of Flora MacDonald (1722-1790), by Scottish artist Allan Ramsay, from the Ashmolean Museum.  Many of you will know the story of Flora MacDonald's role in saving Charles Stuart in the aftermath of Culloden, but for those who don't, here is a synopsis.


[So] far as the people here knew, the MacDonalds had immigrated permanently.

But I had seen the tall memorial stone on Skye--where Flora MacDonald had been born, and would someday die, disillusioned with America.

It wasn’t the first time I’d met someone and known their fate, of course—but it was always unsettling.

Here's Flora MacDonald's grave on the Isle of Skye, Scotland. Click on the photo for a bigger view.

4) Bitter cascara, more commonly known as cascara sagrada (scientific name, Rhamnus purshiana) is a laxative made from the bark of a tree called cascara that is native to the Pacific Northwest.  From Wikipedia:


Spanish conquerors exploring the Pacific Northwest in the 1600s came across many Native peoples using the bark of R. purshiana as a laxative. They gave it the name "Sacred Bark" (cascara sagrada) in honor of its effectiveness.

Given its extremely bitter taste, I wonder how Claire managed to ingest enough of it to make her violently ill without noticing it?


The pain increased once more, a vise squeezing my insides, and I gasped and doubled up once more. As it eased a bit, I opened my eyes and saw one of the ladies, her eyes fixed alertly on my face. A look of dawning realization passed over her features, and still looking at me, she leaned over to whisper to one of her companions. There was too much noise in the room to hear, but I read her lips clearly.

The pain shifted abruptly lower with an ominous interior gurgle, and I realized finally what it was. Not a miscarriage. Not appendicitis, still less a chilled liver. Nor was it poison, precisely. It was bitter cascara.

For more on the medicinal uses of cascara sagrada, look here and here.

5) The photos above show what a wild boar (Sus scrofa) looks like.


Jemmy had tight hold of the cloth with both hands. He was looking toward the wood.

Roger glanced in the direction of the little boy's gaze and froze.

It was a huge black boar, perhaps eight feet away. The thing stood more than three feet at the shoulder, and must weigh two hundred pounds or more, with curving yellow tushes the length of Jemmy’s forearm. It stood with lifted head, piggy snout moistly working as it snuffed the air for food or threat.

Here's a short audio clip of what a wild boar sounds like.  It definitely isn't anything I'd want near a two-year-old child!

For more information about the wild boar, look here.

Hi Karen! Love your Friday fun facts. Normally I read them via the link in your twitter but it says your twitter account is now private. May I be granted access? Hope you didn't get malicious twits or anything. Anyway I admire everything you do with your blog. It's such a lot of hard work!

Love all your Fun Fact Fridays!

I'm constantly amazed at the time & effort you put into FFF. You always manage to find some little tidbit that most readers don't think twice about, then research & present your findings in a really interesting way. Thank you for making Diana's books even more fun to read.

Karen R. - the issue with my Twitter account has been resolved. Everything seems to be back to normal this morning.

Elaine - thank you so much! It takes some effort to put these posts together, but it's worth it, judging from the reaction. :-)