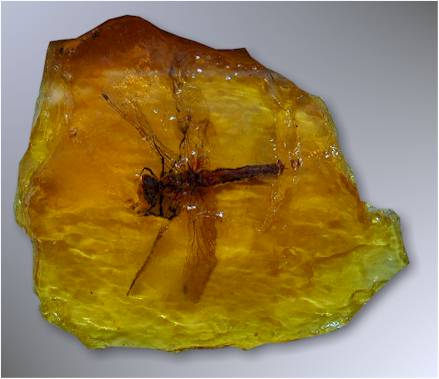 1) I think the chunk of amber that Hugh Munro gave Claire as a wedding gift might have looked like the one shown above.


In the morning, he was sound asleep beside me, and on my blanket rested a small parcel, done up in a sheet of thin paper, fastened with the tail-feather of a woodpecker thrust through the sheet. Unfolding it carefully, I found a large chunk of rough amber. One face of the chunk had been smoothed off and polished, and in this window could be seen the delicate dark form of a tiny dragonfly, suspended in eternal flight.

Amber is fossilized tree resin, more than 100 million years old. Because it originated as a sticky substance, it often contains "inclusions" such as the remains of insects or plants.

Here's another example of a prehistoric insect trapped in amber. (Photo credit: Anders Damgaard, on Flickr.) For more about amber, look here and here. 2) Herman Husband (1724-1795) was a real historical figure. (The spelling of his first name seems to vary depending on which sources you read, but this is definitely the same Quaker who appeared in THE FIERY CROSS.)

I wasn't able to find any paintings of Husband, but the photo above shows a historical marker in Randolph County, NC, commemorating his role in the War of the Regulation.


"It is no rebellion,” Husband said stubbornly. He drew himself up, and pulled a worn black silk ribbon from his pocket, with which to tie back his hair. “But our legitimate complaints have been ignored, disregarded! We have no choice but to come as a physical body, to lay our grievances before Mr. Tryon and thus impress him with the rightness of our objection.”

“I thought I heard you speak of choice a few moments past,” Roger said dryly. “And if now is the time to choose, as you say, it would seem to me that most of the Regulators have chosen violence--judging from such remarks as I heard on my way here."

"Perhaps,” Husband said reluctantly. “Yet we--they--are not an avenging army, not a mob...” And yet his unwilling glance toward the window suggested his awareness that a mob was indeed what was forming on the banks of the Alamance.

Here's a timeline of the events of Husband's life.  He sounds like a remarkable man. 
The stag belled, a guttural, echoing roar, his challenge to any other stag within hearing. For the space of a breath, Roger expected one of Ian’s arrows to whir out of the rowans behind the deer or the echo of Jamie’s rifle to crack the air. Then he shook himself back into his skin and, bending, picked up a stone to throw--but the deer had heard him and was off, with a crash that took it rattling into the dry bracken.

What does it sound like?  Here's a brief video of a red stag in Denmark.


During the mating season, called the rut, mature stags compete for the attentions of the hinds [female deer] and will then try to defend the hinds they attract. Rival stags challenge opponents by belling and walking in parallel. This allows combatants to assess each other's antlers, body size and fighting prowess. If neither stag backs down, a clash of antlers can occur, and stags sometimes sustain serious injuries.

Here is an article about the deer-rutting season in the UK. 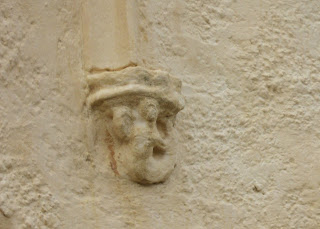 4) You may remember this description of Lallybroch, as Claire first saw it in OUTLANDER:


It was larger than I had expected; a handsome three-story manor of harled white stone, windows outlined in the natural grey stone, a high slate roof with multiple chimneys, and several smaller whitewashed buildings clustered about it, like chicks about a hen.

The photo above shows what harled stone looks like.  I took this photo on a visit to Stirling Castle in Scotland in July, 2012. According to Wikipedia:


In Scottish usage, harling describes an exterior building-surfacing technique which results in a long-lasting weatherproof shield for a stone building. A pigment can be embedded in the harled material, thus obviating the need for repainting. Harling as a technique provides the surface of many Scottish castles, but it is also used for a variety of common everyday building types. Long-lasting and practical, it well suits structures in the Scottish climate.

Harling is still used today in Scotland.  According to this site,


External coatings of lime mortar are still the most effect method of weather proofing solid masonry walls. Lime renders were traditionally applied to give protection to walls built of poor quality rubble stone, porous brick or to walls in exposed locations facing driving winds. They help by acting like a sponge, absorbing rainfall then allowing it to evaporate rather than soak into the wall. Most cottages and houses built of rubble stone would have been rendered originally and they tend to suffer from penetrating damp if the lime is removed or replaced with cement rich render.


5) Here's a video of The Corries singing "Bonnie Dundee".  Claire mentioned this song (along with several others) in a conversation with Roger in THE FIERY CROSS:


"Oh, nothing’s as good as ‘murrrderr’ to a Scot,” I assured him. “Bloody-minded blokes that you all are.”

“What, all of us?” He grinned, plainly not minding this gross generalization in the least.

“To a man,” I assured him. “Mild enough to look at, but insult a Scot or trouble his family, and it’s up wi’ the bonnets of bonnie Dundee."

You can see the lyrics here. (I believe "downie wassles" in the third verse is supposed to be "duine uasals", the "men of worth" described in DRUMS OF AUTUMN.)  For more information about the origin of the song and the historical background, look here.

You have done it again, Karen. I didn't realize what harling is. I just though it was the way to stone was cut. Knowing that now just adds another layers of depth to the description of the house.
And I do like the Corries. I can imaging that Roger's voice was powerful and clear as these fine singers.

Karen, your blog is just great. You've always been able to find loads of interesting information to share with your readers. Well done!

Thanks Karen for the bit on amber; very interesting. I'll be in Puerto Plata, Dominican Republic in a couple of weeks for daughter No. 2's wedding and I'm planning on visiting their amber museum. I understand that the DR is one of the 3 best amber producers in the world. I'm keeping my eyes open for my own dragonfly in amber. :)

Diane - thanks! I had no idea what "harled" stone looked like until I went to Scotland last year and saw it for myself up close. And I agree with you that Roger's voice must have sounded something like that.

Judy - thanks very much for the kind words! :-) My mom and I still talk often about our trip to Scotland, and the visit to Stirling Castle (mentioned in this FFF post) was one of my favorite parts of the whole tour. It makes me smile just thinking about it. Thank you (AGAIN) for a wonderful tour!