1) Pomanders made from oranges studded with cloves have been used for centuries, both as a natural air freshener and as holiday decoration. (Photo credit: SarahVictoriaMarks, on Flickr.)  Lord John was obviously quite familiar with them:


As he followed Stephan from the coach, he caught the scent of von Namtzen’s cologne, something faint and spicy--cloves, he thought, and was absurdly reminded of Christmas, and oranges studded thick with cloves, the smell festive in the house.

If you'd like to try making your own, look here or here. 2) This 15th-century painting by Andrea Montegna depicts St. Sebastian, one of the early Christian saints and martyrs, who died in the year 288. You may recall that there was a tapestry of "St. Sebastian the Human Pincushion", as Claire called him, in Jamie's room at the Abbey in OUTLANDER:


The room was close and stuffy with smoke from the brazier. The only window was covered with a heavy tapestry, one showing the execution of Saint Sebastian. I eyed the saint’s upturned face and arrow-punctured torso, wondering afresh at the mentality of the person who had chosen this particular decoration for a sickroom.

Indifferently rendered as it was, the tapestry was of heavy silk and wool, and excluded all but the strongest drafts. I lifted the lower edge and flapped it, urging the charcoal smoke out through the stone arch. The cold, damp air that streamed in was refreshing, and did something to calm the throbbing that had started in my temples as I stared into the reflecting water, remembering.

I found an interesting bit of trivia here that might answer Claire's question about why the monks chose to put the tapestry of St. Sebastian there:


During the 14th century, the random nature of infection with the Black Death caused people to liken the plague to their villages being shot by an army of nature’s archers. In desperation, they prayed for the intercession of a saint associated with archers, and Saint Sebastian became associated with the plague. 3) This marble bust from the 2nd century AD shows what a Phrygian cap looks like. (Photo from Wikipedia.)


After walking for an hour or so, [Lord John] found a sheltered spot among the roots of an enormous pine tree and, taking out the knife, hacked off his hair as best he could. He stuffed the shorn locks well back under a root, rubbed his hands in the dirt, and then applied them vigorously to hair and face before donning his Phrygian cap.

Thus suitably concealed, he heaped a thick blanket of fallen dry needles over himself, curled up, and went to sleep to the sound of pattering rain in the trees above, once more a free man.

I didn't know what a Phrygian cap was before I read MOHB, and I was fascinated to see how widespread its use was in the late 18th century, particularly in America and France, as a symbol of liberty. Look closely at the official seals of the United States Senate and the Department of the Army, for example.

This type of cap, known as the "bonnet rouge", was ubiquitous during the French Revolution. This 1792 cartoon shows Louis XVI of France wearing a Phrygian cap. (Click on the image for a bigger view.) Look here and here for more examples. 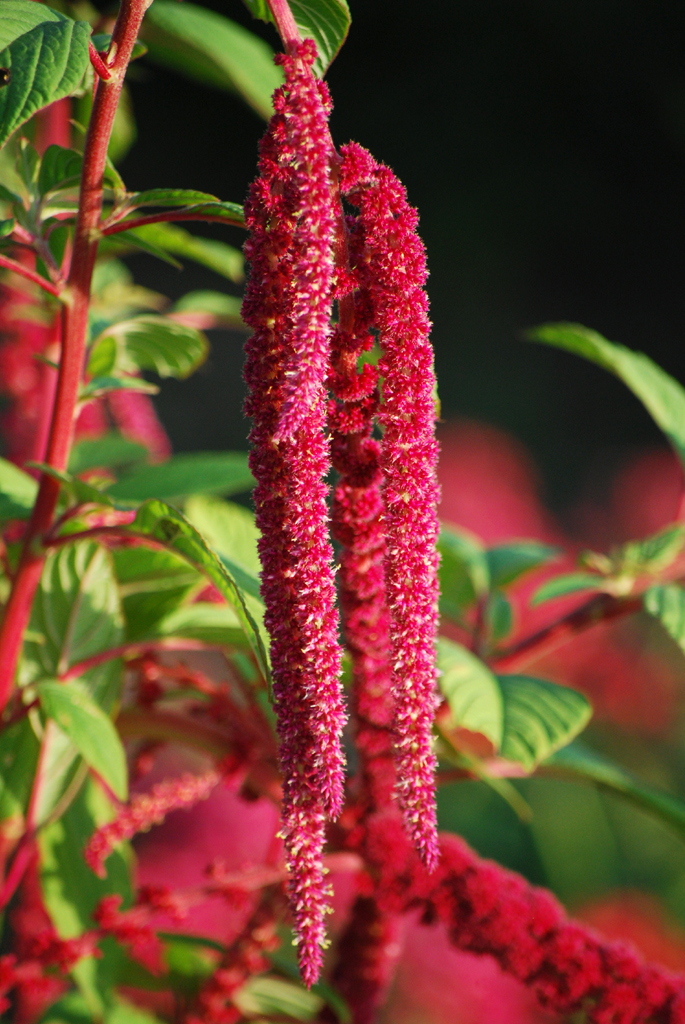 4) I had never heard of amaranthus before I read WRITTEN IN MY OWN HEART'S BLOOD. (Photo credit: monetmama, on Flickr.)  Isn't it beautiful?


"What sort of name is Amaranthus, may I ask?”

She swallowed, blinked, and sat down, clutching the baby.

“It’s a flower,” she said, sounding rather dazed. “My grandfather’s a botanist. It could have been worse,” she added more sharply, seeing John smile. “It might have been Ampelopsis or Petunia.”

“Amaranthus is a very beautiful name, my dear--if I may call you so?” Hal said, with grave courtesy.

I was surprised to learn that the leaves and seeds of amaranthus are edible. From Wikipedia:


Known to the Aztecs as huauhtli, it is thought to have represented up to 80% of their caloric consumption before the conquest. Another important use of amaranth throughout Mesoamerica was to prepare ritual drinks and foods. To this day, amaranth grains are toasted much like popcorn and mixed with honey, molasses or chocolate to make a treat called alegría, meaning "joy" in Spanish.

5) "The Braes o' Killiecrankie" is a traditional Scottish song, with words by Robert Burns, commemorating the Battle of Killiecrankie in 1689, which was part of the first Jacobite Rising. Click on the video above to hear the Corries' version of "Killiecrankie".

You may recall that Roger performed this song for the people on the Ridge in THE FIERY CROSS:


He would have earned his own supper by the time he got it. He had been playing and singing for more than an hour, and the moon was rising over Black Mountain now. He paused under cover of the refrain, just long enough to grab the cup of ale set under his stool and wet his throat, then hit the new verse fresh and solid.

"I fought on land, I fought on sea,
At hame I fought my auntie, Oh!
I met the Devil and Dundee...
On the braes o' Killiecrankie-O!"

You can see the lyrics in Scots and English here.

Delightful! Thank you so much for all of your hard work ;)

Very nice - I LOVE the minute details you find!

Well, that's not at all what I thought Amaranthus (sp?) looked like. Your FFF posts are always so enjoyable and educational. Thank you, Karen!

Fun to see your FF's back, Karen! Nice job!

Thanks, everyone! And Diana, I'm delighted that you enjoy the FFFs as much as everyone else does. <g>