A tribute to Ian the Elder

If you haven't read all of Diana Gabaldon's OUTLANDER books, you will find Major Spoilers below! Read at your own risk.

Today is the anniversary of Ian Murray's death in AN ECHO IN THE BONE, which took place on March 10, 1778.  Here are a few of my favorite quotes by and about Jamie's beloved best friend. Hope you enjoy them!


"Frasers dinna listen to anything when they’ve their danders up. When they’ve shouted themselves out, sometimes ye can make them see reason, but not ’til then."


"I remember, when they were young, auld John told Ian it was his job to stand to Jamie’s right, for he must guard his chief’s weaker side in a fight. And he did--they took it verra seriously, the two of them. And I suppose auld John was right, at that,” she added, snipping off the excess thread. “After a time, nobody would fight them, not even the MacNab lads. Jamie and Ian were both fair-sized, and bonny fighters, and when they stood shoulder to shoulder, there was no one could take the pair o’ them down, even if they were outnumbered.”

She laughed suddenly, and smoothed back a lock of hair behind her ear.

“Watch them sometime, when they’re walking the fields together. I dinna suppose they even realize they do it still, but they do. Jamie always moves to the left, so Ian can take up his place on the right, guardin’ the weak side.”

"Ian...he's the part of me that belongs here, that never left," he said, struggling to explain.

4) This is one of my favorite Ian-and-Jamie scenes:


"Have ye really got to do it, Ian?” Jamie made one last effort, turning to appeal to his brother-in-law.

“Well,” said Ian slowly, “as I’ve told the lad he’s going to be thrashed, and he kens verra well he’s earned it, I canna just go back on my word. But as for me doing it--no, I dinna think I will.” A faint gleam of humor showed in the soft brown eyes. He reached into a drawer of the sideboard, drew out a thick leather strap, and thrust it into Jamie’s hand. “You do it.”

“Me?” Jamie was horror-struck. He made a futile attempt to shove the strap back into Ian’s hand, but his brother-in-law ignored it. “I canna thrash the lad!”

5) Diana Gabaldon has said that she knew for many years that Ian would die of consumption. If you've read AN ECHO IN THE BONE, it's impossible to read this next quote without seeing it as foreshadowing:

6) What a sweet, poignant moment between eight-year-old Jamie and his best friend Ian, age nine:

7) This is my favorite quote about Ian in the entire series. Perfect, just perfect!

He glanced at the house, then at the new grave waiting, but of course that wasn’t Ian anymore. He was panicked for a moment, his earlier emptiness returning—but then it came to him, and, without surprise, he knew what it was Ian had said to him. 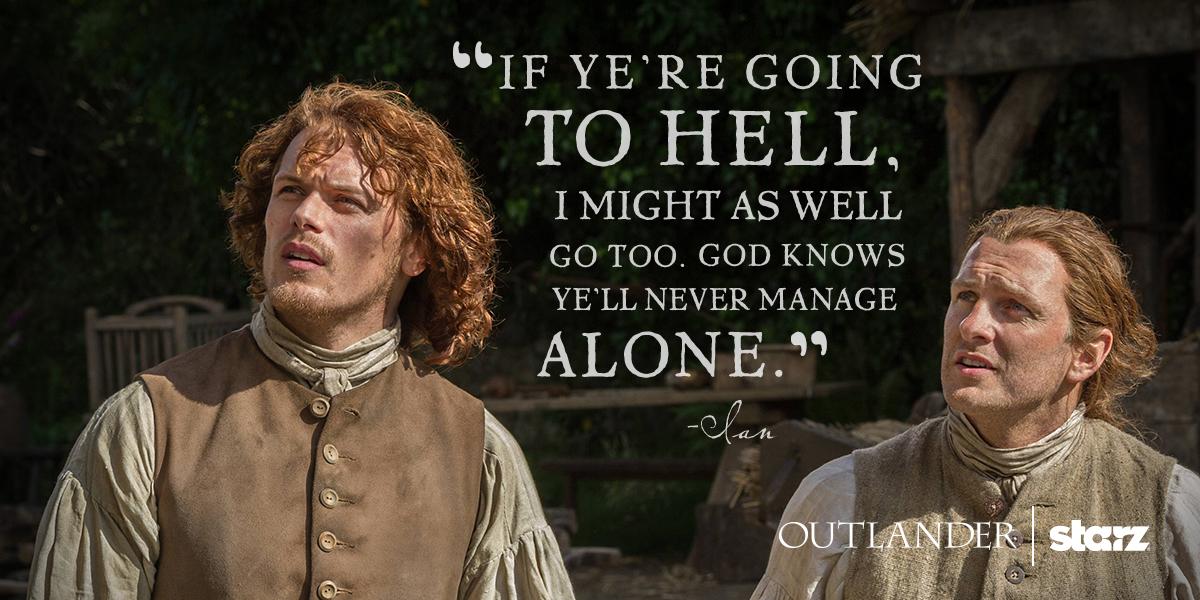 8) And finally, here's a quote from Diana Gabaldon's novella, "Virgins", the story of Jamie and Ian as young mercenaries in France, before Jamie met Claire.

Some of you may recall that this line was used in OUTLANDER Episode 113, "The Watch".

RIP, Ian Murray!  We miss you!

On your right, man.

Brings tears to my eyes every time I read it.

Hi Karen other than Claire , the Older Ian is the closest person to him and what a wonderful relationship they have had from boyhood to manhood, in a sense they are brothers, not of birth but by blood, it's the reason why Jamie is so attached to Young Ian it's from the relationship he has with Ian the elder, hope to see more on Ian during Season 2 this Spring, please post more soon, Love your Blog& Website. Sincerely Yours . Mary Tormey.

Thanks, Karen. Ian is such a solid, quiet, loving character, and Jamie and Jenny were lucky to have had him in their lives. Jamie has endured so many losses, his parents, his brother, and then his best friend . I loved the way Jamie explains to Jenny where Ian will always be. Love is stronger than death, and I am sure that both Jamie and Jenny will always feel Ian's presence nearby.

hello,karen! reading these tidbits about ian reminded me again that i'm not nuts for reading diana's books over and over again. it's not just a matter of reading words but of living with her characters. thanks for these choices.