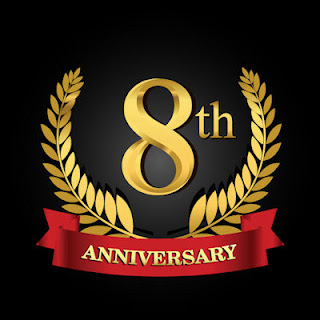 Eight years ago today, on August 28, 2008, I started Outlandish Observations!

I had two goals in mind when I started this blog. The first was simply to learn about blogging. The second was to create a central repository for news and information for OUTLANDER fans, a place where people could go to find answers to commonly asked questions, links to other OUTLANDER-related sites, and the latest information on Diana Gabaldon's new and upcoming releases.

To say that this blog has succeeded far beyond my wildest imaginings is a severe understatement! In the beginning, I never expected anyone to visit my site except a few dozen of my friends from the Compuserve Books and Writers Community and the Ladies of Lallybroch fan-site.  I didn't talk about it on Compuserve for the first couple of years, because I was very reluctant to draw attention to it where Diana Gabaldon could see -- which seems silly in retrospect, but it's true.  Suffice it to say that I did get over that shyness, eventually. <g>

Special thanks to all of my followers on the Outlandish Observations Facebook page! Last year at this time I had 7,063 followers on Facebook. Today that number is 8,752, an increase of 23.9%! I'm amazed and delighted that so many new people have found my site in recent months. Welcome, and I hope you take some time to look around and see what else is available here.

Outlandish Observations was one of the first successful OUTLANDER-related blogs. These days there are dozens and dozens of fan-sites, Facebook groups, and so on. The more the merrier, as far as I'm concerned! <g> I'm proud to be a part of such a thriving, creative, and enthusiastic worldwide community of fans, united in our passion for these books and characters and this amazing story Diana Gabaldon has created, that is now being brought to life on TV.

I'm delighted to see so many new people discovering OUTLANDER as a result of the TV series! Here are the links to my Season 2 episode recaps, for those of you who may have missed them:

Look here for my recaps of all of the Season 1 episodes.

No question about it, this is a very exciting time for OUTLANDER fans everywhere! It's quite a challenge to keep up with everything that's going on these days, and I hope you're finding this site helpful.

Many, many thanks to all of you who've visited Outlandish Observations over the past eight years. It's been an amazing journey, and I'm so glad you've come along for the ride.

Karen, I am most grateful for you watching over this site. I am not a techie person and depend on you sharing valuable information about Outlander's author, books, and series. It will be wonderful if you keep this unique site around for another 8 years. It is not as aggressive as the CompuServe site which has answered many of my questions, but seems to overpower me at times. Outlandish Observations is my go to place on a weekly basis. Thank you Karen for sharing and caring about Diana Gabaldon's fans for the last 8 years. Happy Anniversary!

Thank you for your dedication to all things Outlander!

Thanks for all you do to keep us current on Outlander news and for all your links to interesting rabbit holes. -- Leigh in San Francisco

Congratulations Karen on your great site and thank you for all your hard work! Much appreciated!

Karen Henry, Congratulations on the celebration of 8 Years as Moderator of Outlandish Observation!! Here's to another 8 Years of great & accurate reporting!! Myrna

Hi Karen < congratulations on your anniversary , I love your Blog and think it's one of the best around about and relation to all things Outlander , when I first became an Outlander Fan, there were so many Outlander Websites to choose from that it took awile to look them over and when I came across yours , I found it to be very informative and fun at the same time so I added it to my Facebook page and am so glad I did , so keep up the great work and Happy Anniversary to you , please post more soon. LOve Your Blog.