I was wondering how much of the story Diana Gabaldon actually wrote, so I asked her for more details. As she explained on Compuserve on June 12, 2017:

There is a brief excerpt from this story on Diana's Facebook page here.

For more information about the other stories in this anthology, look here.

You can order MATCHUP from Amazon or Barnes & Noble, and it's also available from Amazon UK for those of you who live outside the US.  If you want an autographed copy, you can order the book from the Poisoned Pen bookstore in Scottsdale, Arizona. The Poisoned Pen is Diana Gabaldon's local independent bookstore; they stock all of her books, and they ship all over the world. 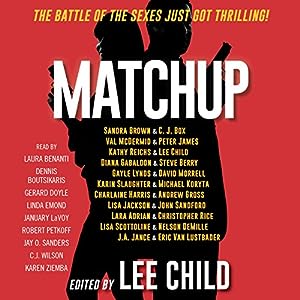 The audio version of MATCHUP is available for download on audible.com here.

And no, in case you're wondering, the fact that Diana Gabaldon has a story in this anthology is not slowing down her progress on GO TELL THE BEES THAT I AM GONE, Book 9 of the OUTLANDER series! Diana often says that she likes to work on multiple projects at once, to keep from getting writer's block.

Have you read this story?  If so, please leave a comment here or on my Outlandish Observations Facebook page, and let us know what you think.
diana gabaldon jamie fraser matchup outlander past prologue release day steve berry

Hi Karen , this will be a great summer beach read as well as "Seven Stones To Stand or Fall , and will take the bit out of Droughlander and the start of Season 3 this Fall , am very thrilled to be add these great books to my Outlander Library this Summer. please post more soon. Love Your Blog and website, Sincerely,