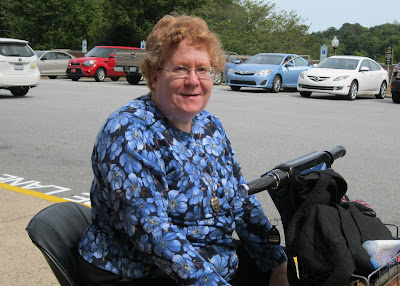 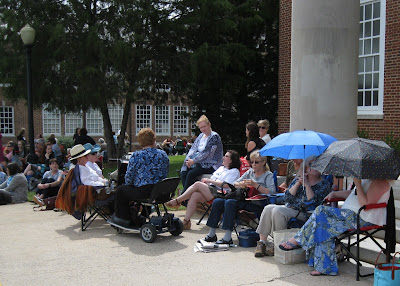 We got there more than two hours before the doors opened, and there was already a considerable crowd waiting in line, including many members of the NC Outlander Fans Facebook group. By the time they started letting people inside, the line stretched all the way around the building (!) 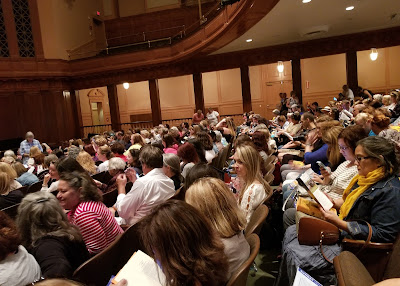 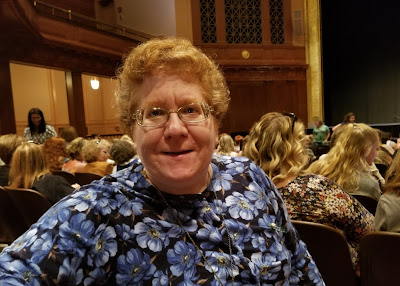 I was so excited to be there! 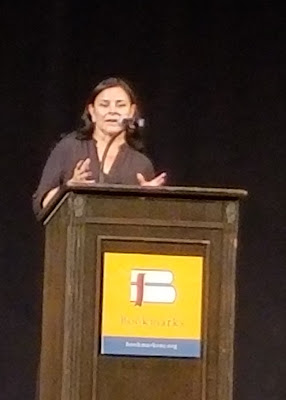 Diana spoke for more than an hour. She was very entertaining, as usual. She confirmed (in front of the audience of some 1800 North Carolina fans) that they will unfortunately not be doing any Season 4 filming in North Carolina. Diana said that in addition to the fact that they have a huge OUTLANDER production studio in Cumbernauld, Scotland, they are a non-union shop, and filming in the US would require the production crew to be members of a union.

The highlight of the evening for me, of course, was getting to see Diana, for the first time in more than four years.  When she saw me approach, she told the woman assisting her, "She's a friend," and gave me a hug. 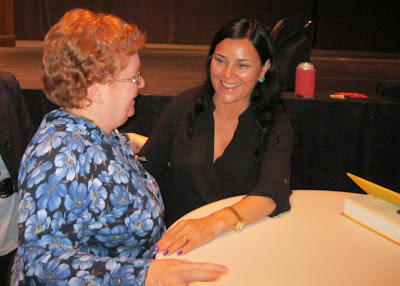 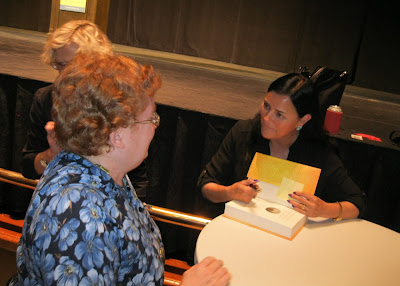 I thanked her for the wonderful Dedication in SEVEN STONES TO STAND OR FALL (which is quite a thrill for me personally!) and then she signed my copy. 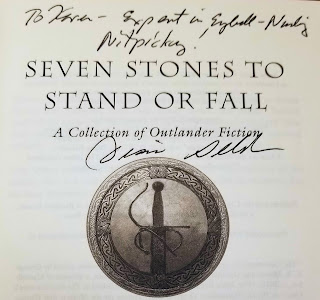 The inscription reads, "To Karen, Expert in Eyeball-Numbing Nitpickery!"  This is a reference to the fact that she very generously let me read the stories in this collection before they were published (an honor and a privilege!), and I was able to spot some issues with dates and such that her copy-editor didn't catch.

We had a good time at this event, and it was great to get a chance to talk to other OUTLANDER fans. Many thanks to Diana for agreeing to do this event on fairly short notice!
book-signing bookmarks book festival diana gabaldon outlander outlander starz tv series winston-salem

Hi Karen how wonderful for you , I would have been so honored to have had the chance to meet her , Diana is one great writer and would n't have minded in the lease in waiting in line to see her, watched the premiere of season 3 and it was so brillent , and so well acted and it was what fans wanted it to be , Outlander is one of the most well acted shows on TV today , and am so glad I'm a fan of it , this season will be very exciting so a great start to a great season , will be watching next Sunday , hope you do too , please post more soon. Sincerely.

Very happy for you Karen! well deserved recognition for all you do for Diana and all her fans.

So glad you got to meet her again. I don't live far from Winston myself (Greensboro). :-)

How wonderful about getting to read Seven Stones for her!!! Definitely an honor and privilege! So glad you got to attend and visit with her in person! She seems like a lovely person to know.

So happy for you Karen! You deserve all good things, for all your hard work. Please know that we ALL appreciate everything you do!