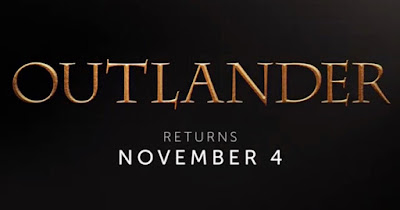 STARZ released a new promo video on Facebook yesterday, similar to the Season 4 trailer we saw a few days ago. At the very end of the video, it clearly shows a premiere date of November 4.

We have known for a long time that Season 4 would premiere in November, but the exact date has been a matter for speculation until now.  I should point out that this date has not yet been confirmed in a press release or any other official announcement by STARZ, and nothing has been announced on the official OUTLANDER Facebook or Twitter accounts. The only evidence we have of this date is in the video on the STARZ Facebook page.

But assuming that this does turn out to be the real premiere date, that means we only have three more months to wait until #Droughtlander will finally be over!
outlander outlander season 4 premiere date season 4 starz

Hi Karen thanks for the info and will be watching some of season 4 on vacation ,and in most places you stay in have HBO or Starz and in some cases for free so am very much looking forward to the Fall & season 4 will be re-reading the book in Sept, please post more soon. Happy Week. Sincerely.