My mom and I had a wonderful time at Diana's appearance in Burlington, NC, yesterday. I really couldn't be more pleased with the way it worked out! The weather was perfect, clear skies and about 73F. It was a small crowd for a Diana Gabaldon event, especially by the standards of recent years, maybe 350 people in the theater, not counting those who bought tickets for the book-signing only, so it had a very intimate feeling to it.

We chatted for a while before the talk started with an acquaintaince of mine from the NC OUTLANDER Fans Facebook group. Here's a selfie I took while we were waiting. 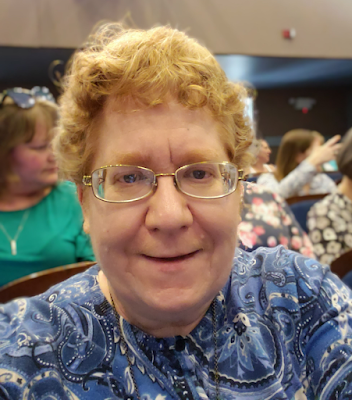 I enjoyed Diana's talk very much. She talked about Book 9, GO TELL THE BEES THAT I AM GONE ("should be out later this year"), and the TV series (she said she's starting to see dailies from Season 5 and it looks good so far), and read an excerpt from BEES. I normally am a very strict "excerpt-avoider", but I will gladly make an exception for anything she reads when I'm in the audience. <g>

Since this was a North Carolina crowd, she spent some time talking about why the books focus on NC. ("I love North Carolina," she said, but the pollen in the air at this time of year really aggravates her allergies.) She said they can't film the TV show in NC because the entire production team (including some 250 people who work behind the scenes) would have to join a union, or else they would have to hire a whole new production crew. It's just not feasible, when the main studios are in Cumbernauld, Scotland. I knew this, but it was good to hear the explanation in her own words.

Diana also spoke about what it was like to visit Alamance Battleground many years ago when she was writing THE FIERY CROSS, when the site of the battlefield was marked only by a tiny sign that was easy to miss. All of the proceeds from her events on this 3-day visit to NC are going to support maintenance and preservation of these historical sites, and it was clear that the people who run the battlefield visitor's center are just delighted by the attention OUTLANDER is bringing to what was, after all, a fairly obscure battle of the pre-Revolutionary War era. They are hoping for an "OUTLANDER Effect" on NC tourism similar to what has happened in Scotland since the TV show premiered.

I didn't really hear anything in Diana's talk that I hadn't known about before, but I don't mind. It's a real pleasure for me just listening to her speak! 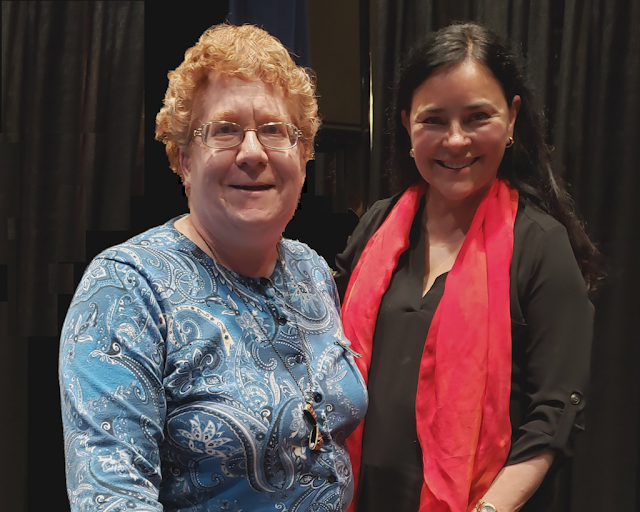 When it was time for the book-signing, they escorted my mom and me, along with another person who was using a wheelchair, around the outside of the building to the stage door, so we wouldn't have to go up the stairs to the stage where the signing was taking place. That worked out really well, and we ended up right at the front of the signing line. It was great to see Diana again, and I had a chance to tell her everything I had planned. 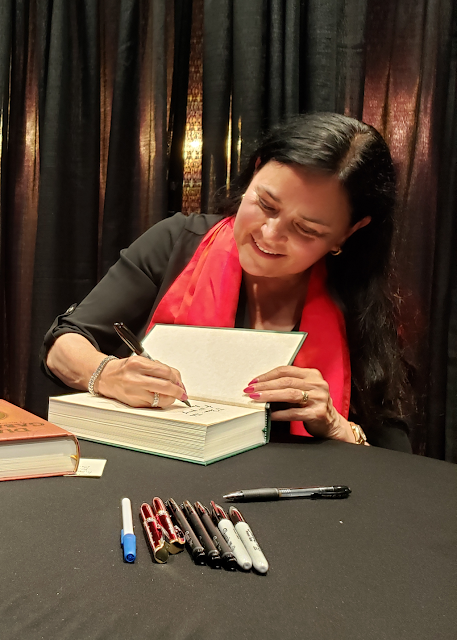 I brought the 25th anniversary editions of DRAGONFLY and VOYAGER for Diana to sign. I asked for an inscription that said, "To Karen, thanks for 10 years of bumblebee-herding." This is a reference to my role as Section Leader, aka moderator, in the Diana Gabaldon section of TheLitForum.com, formerly the Compuserve Books and Writers Community. Diana refers to what I do on the forum as "herding the bumblebees", and the image always makes me smile.

She looked at me in surprise. "Has it really been ten years already?" I nodded and said, "A little more than that, actually." <g> (Counting from September 2008.) And you can see she took that into consideration when she wrote the inscriptions. 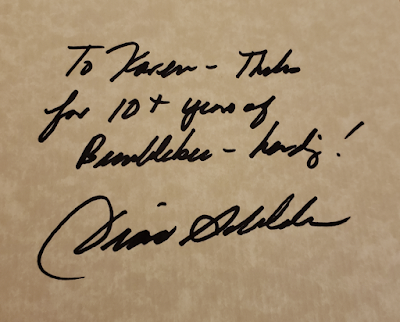 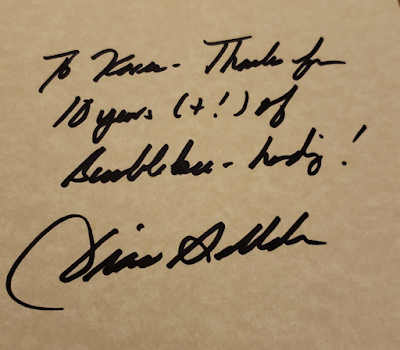 The whole time we were talking and Diana was signing my books, the designated picture-taker was snapping away with my phone. I came away with some really terrific photos! I'm delighted to have not one but two excellent photos of me and Diana together. <g>

It was a wonderful day and I'm really glad I had the opportunity to go.
appearances book-signing burlington diana gabaldon outlander

Sounds so wonderful-- I wish I could've been there. I may not be at the Litforum much anymore, but Diana has been instrumental in my own writing as well as being kind and generous--and not to mention all the hours of wonderful rereading (and rereading) she's given us. The pictures are great.

Hi Karen, I would love to have been at this event! However I am planning to go to the reenactment of the Battle of Alamance. Have you been? Any advice or suggestions? Also there's another issue I wanted to ask you about, as an Outlander books expect. I recently discovered that my edition (and many others according to the response on OL Universe) of TFC is missing a paragraph in Ch. 99...It's the one where the roses fall out of Jenny's letter. Is this old news? Is it something the publishers are already aware of? I posted to Diana about it on FB and Twitter but no response. I hate to bother her anyway.

And do we have to be concerned about other missing moments. This was a sweet detail!
Cheers,
Nancy Fitzpatrick

PS If you reply, please reply to nancytakesahike@yahoo.com. Thanks.

Nancy - I just checked my first edition hardcover of FIERY CROSS and there is no mention of roses in Jenny's letter in chapter 99. So I don't know what you're talking about, sorry.

Thanks, Elise! It was a wonderful day, and I really couldn't have asked for a better experience. :-)

She's got very elegant hands as seen in her photo of her signing your books. Thanks for being a bumblebee-herder. That's awesome.

So happy that you got to be there and see HERSELF....YOU are a major part of helping us keep up to date and informed on OL s well as being a part of her Team. Thank you for sharing your visit with us. I would loved to have been there---but the cost was more than I could manage. Awesome that she is donating her monies to one of our NC Historical sites and helping to make it better known....makes me Love DG EVEN MORE! Keep posting!

Hello Karen! What a luck do you have, that you met and listened to Diana You are very lucky I am from Bulrgaria and I will not be have your luck . En Bulgaria there are only two of her books in translation For the others we will dream. I learn english to read them all.Greetings!

Hi Karen what a wonderful event and Diana seems to be a sweet , friendly and down to earth person and I'd be so honored to be able to meet her one day . glad to hear that 'Bees' will be out sometime soon, and that shooting on season 5 is going well , I love NC and some of my relatives live in New Bern and Willamiton and I visit from time to time and think of Jamie and Claire when I do . I love your website and thanks so much for being our repesenative for us fans through your website , and please keep on "Beekeeping ' please post more soon. Happy Week. Loving Outlander & Diana . Sincerely .

NC is a right to work state. Compulsory Union membership is not allowed. I'm not sure that the IATSE can do that in a right-to-work state.

Thanks for the great article. I'm reading book 8, 'Written in my own heart's blood' and will start reading the whole series again, along with the Lord John books and other fill in novels and novellas. Thanks Diana for bringing Jenny Murray to America! Awesome.

I think the reader who asks about an omitted paragraph about roses may be referring to this paragraph below....but the roses aren’t falling out of letters. It is, evidently, late in the afternoon and Jenny is sitting by a window as she writes—a window where rose bushes grow outside at Lallybroch, roses once planted by Jenny’s mother. And as the afternoon passes, the sun sends SHADOWS of those roses outside the window over Jenny’s paper as she writes: (at least that is my interpretation of this excerpt from TFC ):
————
“I have been writing letters all the morning, debating with myself whether to finish this one, or to put it into the fire instead. But now the accounts are done, I have written to everyone I can think of, and the clouds have gone away, so the sun shines through the window by my desk, and the shadows of Mother’s roses are falling over me.”