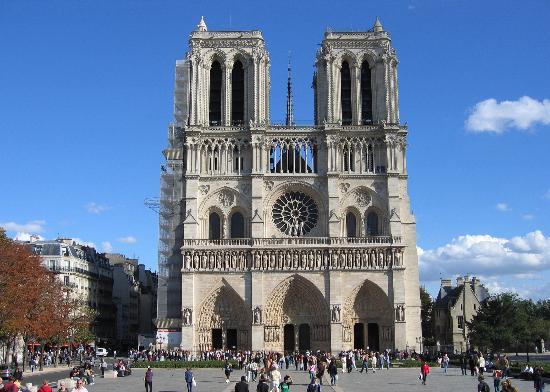 Like so many of you, I was shocked and saddened to hear about the devastating fire that broke out today at the Cathedral of Notre Dame in Paris. I was lucky to be able to see it for myself many years ago, as a nineteen-year-old college student on my first overseas trip.

As usual in times of stress, I reach for Diana Gabaldon's books, hoping they can provide some comfort, or at least distraction. So I thought I'd share this pair of quotes about Notre Dame.

1) Here's the Comte St. Germain, standing before the massive stone walls of the Cathedral:


Notre Dame de Paris rose black above him, solid, obliterating the light of the stars, the beauty of the night. Very appropriate. He’d always thought that the church blocked one’s sight of God. Nonetheless, the sight of the monstrous stone creature made him shiver as he passed under its shadow, despite the warm cloak.

Perhaps it was the cathedral’s stones themselves that gave him the sense of menace? He stopped, paused for a heartbeat, and then strode up to the church’s wall and pressed his palm flat against the cold limestone. There was no immediate sense of anything, just the cold roughness of the rock. Impulsively, he shut his eyes and tried to feel his way into the rock. At first, nothing. But he waited, pressing with his mind, a repeated question. Are you there?

He would have been terrified to receive an answer but was obscurely disappointed not to. Even so, when he finally opened his eyes and took his hands away, he saw a trace of blue light, the barest trace, glowing briefly between his knuckles. That frightened him, and he hurried away, hiding his hands beneath the shelter of the cloak. 2) The photo above shows the Easter vigil at the Cathedral of Notre Dame.  It looks very much as Jamie remembers:


"The church was all dark,” Jamie continued, “but the folk coming for the service would buy small tapers from the crones at the doors. It was something like this”--I felt, rather than saw, his motion at the sky above--“a great space above, all ringing wi’ the silence, and folk packed in on every side.” Hot as it was, I gave an involuntary shiver at these words, which conjured up a vision of the dead around us, crowding silently side by side, in anticipation of an imminent resurrection.

“And then, just when I thought I couldna bear the silence and the crowd, there came the priest’s voice from the door. ‘Lumen Christi!’ he called out, and the acolytes lit the great candle that he carried. Then from it they took the flame to their own tapers, and scampered up and down the aisles, passing the fire to the candles o’ the faithful.”

Very sad to think that this happened the week before Easter.

My thoughts are with the people of France tonight. I can't imagine what they must be feeling, watching the images on TV of Notre Dame in flames.
diana gabaldon notre dame outlander paris