"Past Prologue" standalone e-book will be out July 23! 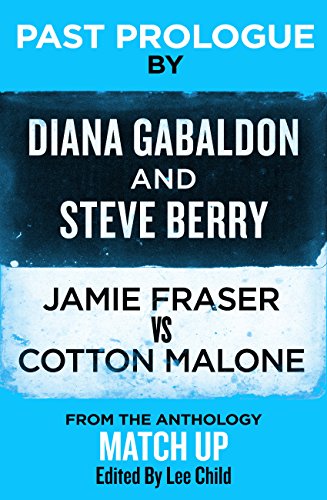 Diana Gabaldon's story, "Past Prologue", co-written with Steve Berry, will be released as a standalone e-book in the US and Canada on July 23, 2019! This story, originally published in 2017 in an anthology called MATCHUP, features both Steve Berry's character Cotton Malone, and....Jamie Fraser!

The e-book costs only 99 cents in the US, $1.99 in Canada. Well worth it, in my opinion, for a terrific story with plenty for OUTLANDER fans to speculate about.

Without getting into spoilers at all, let me just say that I thoroughly enjoyed this story, and I think it's a must-read for OUTLANDER fans! Just like "A Leaf on the Wind of All Hallows", this story packs a lot of action and a great deal of intriguing fodder for speculation into a small space, and I thought it was a very entertaining ride. Highly recommended!

If you're a little nervous about the fact that this story was co-written with another author, really, don't worry about it! From the very first lines of "Past Prologue", Diana Gabaldon's "voice" comes through very clearly.

I was wondering how much of the story Diana Gabaldon actually wrote, so I asked her for more details. As she explained on Facebook on June 13, 2017:

Hi Karen , I loved this story in this volume and it was so good I wished it had been longer and was glad she came out with the book of Outlander . "Standing Stones to Stand or Fall ' and it was so much fun to read and will be re-reading them again this summer . please post more soon. Happy Weekend. Sincerely .