Confessions of an OUTLANDER Audiobook Addict 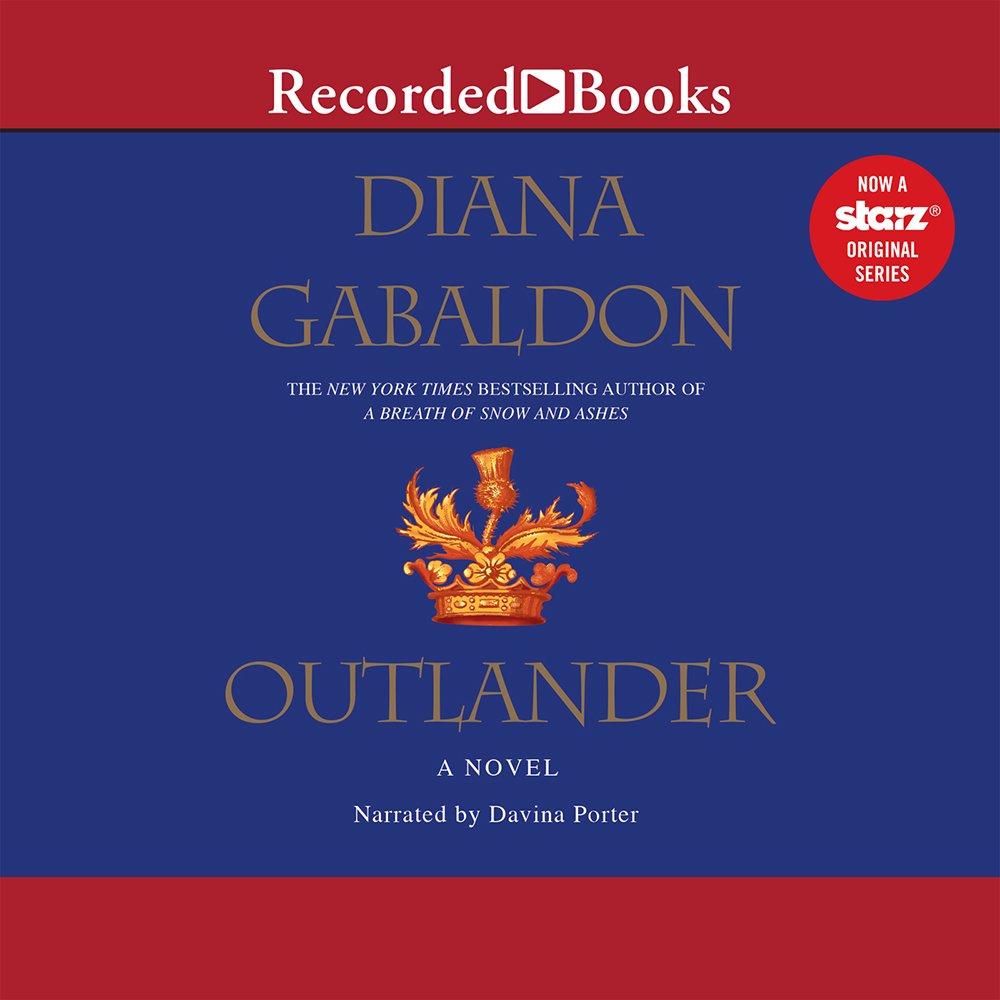 Check out this excellent OutlanderCast interview with Davina Porter, who narrates the OUTLANDER audiobooks! She's a wonderful narrator, and she does a terrific job with all the different voices and accents.

I've been wondering for a while if Davina Porter would be available to do the audiobook for GO TELL THE BEES THAT I AM GONE, Book 9 in the OUTLANDER series. I was afraid she might have retired, and so I was delighted and relieved to see Diana Gabaldon's response to my comment on her Facebook page today: 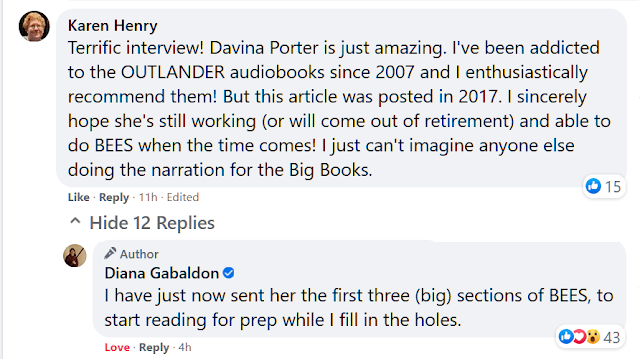 This is really wonderful news!

I've been addicted to the OUTLANDER audiobooks since 2007, and I enthusiastically recommend them! Here's an update of a blog post I did a few years ago with some more thoughts on the subject.

CONFESSIONS OF AN OUTLANDER AUDIOBOOK ADDICT

Well, all right, to be honest, I'm just addicted to the series, period. In whatever form. <g> But I wanted to share some thoughts on the audio versions of the OUTLANDER and Lord John books, which I've been listening to almost daily since April 2007.

Please note, if you haven't read all of the OUTLANDER books, there are SPOILERS below!

1) They force you to slow down, and take in all the details.

I have always been a fast reader, and a "skimmer". I missed huge chunks of Good Stuff the first time I read the series, particularly in DRAGONFLY IN AMBER, because I was reading much too fast.

Because the audiobook narrators read Every Single Word, you learn to slow down and listen for the smaller details, the subtleties, the lyrical descriptions that skim-readers like myself often breeze right past. Slowing down has enabled me to see things in Diana Gabaldon's writing that I never would have picked up on otherwise, no matter how many times I re-read the books, because I just read too fast.

2) The narrators are terrific.

Davina Porter's voice is so expressive, and she does a wonderful job with all of the accents. (Well, almost all. See Things I Don't Like, below.) I love being able to hear what the Scottish accents and Gaelic phrases actually sound like. And she can be very creative with the voices at times. I absolutely love the way her voice for Roger changes in FIERY CROSS, for example: strong and resonant in the beginning; barely more than a hoarse whisper when he begins to speak again after the hanging; and by the end, a sort of harsh, rasping shadow of his original voice. Very much as it's described in the book, in other words. And Davina Porter's voice for Mrs. Bug sounds so exactly like the way I imagined, that I always have to laugh whenever I hear it.

Here's a wonderful two-part video interview with Davina Porter from 2009.

Jeff Woodman, narrator of the Lord John audiobooks, is also a wonderful reader. I love his voices for Lord John, Hal, Tom Byrd, and Harry Quarry.  Diana Gabaldon says that Jeff Woodman's voice for Lord John sounds just like the voice she hears in her head. <g>  He doesn't do so well (understandably enough) with the female voices, but overall he does a good job.

Here's an interview with Jeff Woodman from 2010.


All of the novellas and shorter pieces that Diana Gabaldon has published in recent years are also available in audio format on audible.com. The audio version of "Virgins" is a real treat, as it's read by a Scot, Allan Scott-Douglas, who does an excellent job of voicing 19-year-old Jamie and his best friend Ian.

3) You can listen anywhere, any time.

Back in the pre-COVID days, before I started working from home, I often used to listen to the audiobooks in the car while driving back and forth to work. It works out pretty well, especially if you are sitting in traffic, but I would recommend caution if you are listening to one of the really emotionally intense parts of the books! One day in 2007, I was driving home while listening to the scene in OUTLANDER where Jamie is being given last rites. I suddenly found myself half-blinded by tears, still driving down the road, about a mile from my house. I got home without incident, but it was a pretty scary experience.

Some people like to listen to the audiobooks while gardening or doing housework.  I enjoy listening to them while doing needlepoint.

Some of the voices are just plain wrong. If you've read A BREATH OF SNOW AND ASHES, you'll recall Wendigo Donner, the time-travelling Native American who whistles "Yellow Submarine". He's clearly not British in the book:


"Man," he said, longing clear in his voice, "what I wouldn't give for a cold Bud and a baseball game on TV."

Unfortunately, the voice Davina Porter uses for him in the audio version makes him sound like a Liverpudlian. Certainly he doesn't sound like a man born and raised in the U.S.  (Davina has admitted that she got his accent wrong.)  Brianna's accent is also a bit odd. She lived her whole childhood in Boston, yet she doesn't have a trace of a Boston accent. I've always thought she should.

And as for Jeff Woodman's voices: Well, let's just say that I don't care for his Jamie-voice at all. Jamie sounds half-dead in most of the scenes where he appears in BROTHERHOOD OF THE BLADE, his voice dull and almost inflectionless. And even if this is Woodman's way of showing a more subdued or even depressed Jamie than we're used to from the OUTLANDER books (which would be reasonable under the circumstances, I suppose), I still don't like it one bit. Especially compared to Davina Porter's Jamie.

The dual-narrator approach that they tried with THE SCOTTISH PRISONER was not as successful as I had hoped.  I thought it was a good idea to have two narrators for that book, with Jeff Woodman reading Lord John's parts of the book and Rick Holmes reading Jamie's. Unfortunately, while Rick Holmes has a very soothing voice as a narrator, his Jamie doesn't sound distinctively Scottish, at least to my ears.

Still, these are minor quibbles at best, and they don't diminish my enjoyment of the audiobooks at all.

A Word of Caution

I would recommend that those of you with young children be careful which parts of the books you listen to when your kids are around. There are many scenes in these books that would be awkward to explain, to put it mildly. <g>  And I'm not just talking about the sex scenes!

One day in 2010, I was on my way out to lunch with a couple of male co-workers, and I forgot I'd had DRAGONFLY IN AMBER on my iPod coming through the car stereo.  I got in the car, turned on the ignition, and heard Davina Porter (in Jamie's voice) saying "pustulent arseholes...." <g>  (I think the context of the phrase was something to do with Claire's work at L'Hopital des Anges, but it doesn't matter; the point is, these were the first and only words my coworkers heard.)

I shut the stereo off fast, blushing furiously.

My startled coworkers stared first at the radio, then at me.  "What on earth was THAT?!"

I just couldn't think of any way to explain.  The truth would have required a lot more explanation than I was prepared to give, just at that moment.  (These being coworkers who had no idea of my OUTLANDER-addiction.)  I think they went away thinking I had very odd tastes in radio programs, or something.

I suppose I should count myself lucky that I hadn't been listening to one of the sex scenes. <g>  That would have been AWFULLY hard to explain!

Where to Find the Audiobooks

All of Diana Gabaldon's books are available in unabridged audio format.  I would strongly encourage anyone who's interested to go to audible.com or Amazon to check them out!

Please note, if you get the OUTLANDER audiobooks from the library, make sure you are listening to the UNABRIDGED version, read by Davina Porter.  (The abridged versions were phased out a few years ago, much to Diana Gabaldon's relief and delight.)

I hope you enjoy the audiobooks as much as I have!
audiobooks davina porter diana gabaldon jeff woodman outlander outlander audiobooks

Hi Karen , I love the audio books and have every single one of them started listening to them in the library , they have books on audio CD and found the Outlander books and like you fell in love with them and Davina Porter does an amazing job with the narration Jamie & Claire especially , and loved them so much that I started a collection of my own and bought each one from Barnes &Noble , love the fact that you can listen to them anywhere and at any time , I listen to them either at night or during the day , the Winter especially is a great time to listen to the, when you can't go out and have been a Godsent during the isolation period , hope you are staying safe , have pre-ordered my copies of season 5 on DVD and can't wait to add them to my Outlander DVD library , meanwhile will be listening to the 'Fiery Cross ' this month . please post more soon. Loving Outlander.

I totally agree with you about the voices in Scottish Prisoner. It is the only audio book I bought from Diana's world and I was disappointed to say the least. I had already read the book and loved it, so I think that added to the disappointment.

I am listening to the Wendigo Donner part just now and was moved to search online to see if anyone else was troubles by it - I’m glad I’m not the only one! I suppose Davina Porter was thrown off because in his first scene he said, “I’m from the North,” so she gave him a lovely Northern accent...just from the wrong country! Oops...
I do agree with everything you wrote. My library app (Libby) just added in the entire Outlander series a few months ago, and I’ve been listening ever since. They are wonderful. My only quibbles are with Jeff Woodman’s Jamie and also with Davina Porter’s Lord John - both a bit flat and dull. Brianna sounded half-British at first, but as the books went on, Porter seemed to settle more into her voice and it stabilized- sometimes I do hear a tiny bit of Boston in it. Still, I love her narration overall and I’m soooo glad to hear she’ll be doing Bees....and that Bees has reached a stage where she can start prepping it! This is soooo exciting!
By the way, speaking of audiobooks, I also enjoy the Aubrey-Maturin (Master and Commander) series on audiobook. That’s another blissfully long series with well-drawn characters in a similar setting. (The quantity and content of a naval diet seem rather more realistic in these than in Voyager, actually.)