"Custom of the Army" FAQ

3/15/2010 05:30:00 PM
A lot of people have been asking about Diana Gabaldon's latest story, "The Custom of the Army". I thought I'd try to collect the answers in one place. Please pass this on to anyone you think might be interested. (Last updated September 1, 2011.)

1) What is "The Custom of the Army" and where can I find it?

This is a Lord John story, a 30,000-word novella, originally published in hardcover in March, 2010, in the WARRIORS anthology (edited by George R. R. Martin and Gardner Dozois). The story is also available in paperback in WARRIORS 3, which was published in August, 2011.

2) Where does this story fit into the timeline of the other Lord John books/stories?

"Custom" takes place in 1759, after the events in BROTHERHOOD OF THE BLADE and "Haunted Soldier".

3) How can I get an autographed copy of WARRIORS or WARRIORS 3?

All of Diana Gabaldon's books are available through the Poisoned Pen bookstore, which is her local bookstore in Scottsdale, Arizona. They ship all over the world. If you want a signed copy of WARRIORS or WARRIORS 3, please contact the Poisoned Pen.

4) Is there an audio version of "Custom of the Army"?

Yes.  The unabridged audio version of WARRIORS (including "Custom") was released in CD and mp3 versions on March 29, 2011.

5) What about a Kindle edition of WARRIORS?

You can download the Kindle version of WARRIORS here.

6) There are three different mass-market paperback editions of WARRIORS.  Which one contains Diana Gabaldon's story?

"The Custom of the Army" is included in WARRIORS 3, which was released on August 2, 2011 in mass-market paperback format (that's the small size paperback).  Look here for more details, or click on the picture below to go to the Amazon order page for WARRIORS 3. 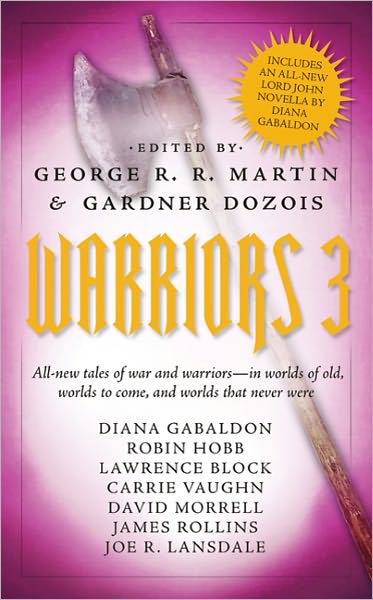 7) I haven't yet read AN ECHO IN THE BONE. Can this story be read before ECHO?

Yes. There are a few places where it will help to be familiar with the events of ECHO, but I think you can definitely enjoy "Custom of the Army" even if you haven't read ECHO. (The story does, however, assume some degree of familiarity with the previous Lord John books/stories.)

8) Where can I go to discuss this story?

9) What is the significance of the title, "The Custom of the Army"?