ECHO in paperback in the UK 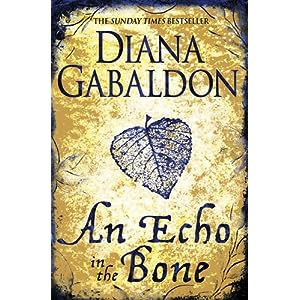 I just noticed today that the cover art for the upcoming UK paperback release of Diana Gabaldon's AN ECHO IN THE BONE is different from the hardcover.

I think I like this version better than the original (but then, it doesn't really matter what I think, since I'm not likely ever to see the UK version of the book).

There is some confusion surrounding the release date for ECHO in mass-market paperback in the UK. Amazon.co.uk is actually showing several different paperback editions, with different prices and different release dates, and I'm not sure which of them to trust. Diana said she would check with the editor and let us know what the correct release date is. I'll post here as soon as I find out any further details.

Note for UK fans: Diana says the UK mass-market paperback of ECHO is supposed to include one or more excerpts from Book 8 that follow up on the cliffhangers from the end of ECHO. I think that's great news; as I told Diana on Compuserve today, in my opinion the UK readers deserve some extra "goodies", in compensation for that very frustrating four-month delay in ECHO's hardcover release!

The discussion on Compuserve is here if you're interested.
an echo in the bone cover art diana gabaldon uk release date

The cover is great and so is the book!