5/24/2011 07:11:00 AM
In honor of today's release of the mass-market (small size) paperback of AN ECHO IN THE BONE, here are some of my favorite quotes from ECHO.  Hope you enjoy these!  And feel free to contribute your own favorites, if you want to. 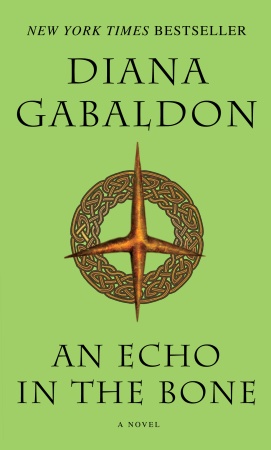 
“Would you care to explain to me exactly which aspects of plant inspection require a penis?” (Chapter 16, "Unarmed Conflict", p. 148)

I love this line. Go Bree!

One of the best Fergus moments in the entire series. Just wonderful!


"Ah.  Now, where was I?  Oh, aye--ye wanted to hear what I was thinking of."
"I've changed my mind."  I was panting shallowly, as much from the weight on my chest as from desire.  Both were considerable.
He made a Scottish noise indicating deep amusement and tightened his grip on my wrists.
"You started it, Sassenach--but I'll finish it."  Whereupon he put his lips to my wet ear and told me in a slow whisper exactly what he'd been thinking.  Not moving an inch while he did so, save to put his hand back over my mouth when I began to call him names.
(Chapter 50, "Exodus", p. 478)

I love this whole scene in the Commandant's garden.  One of the best in the whole book, in my opinion.

I love it when Jamie teases Claire. But it's her reply that makes me laugh out loud.

This is a terrific line. I hadn't heard the term before I read ECHO, but having looked up the definition, now I'm sure I won't ever forget it. Boy, is that ever appropriate!

A reminder (as if we needed one!) that Claire is not a woman to be messed with, ever.


“Where d’ye think he is now?” Jenny said suddenly. “Ian, I mean.”
He glanced at the house, then at the new grave waiting, but of course that wasn’t Ian anymore. He was panicked for a moment, his earlier emptiness returning—-but then it came to him, and, without surprise, he knew what it was Ian had said to him.
“On your right, man.” On his right. Guarding his weak side.
“He’s just here,” he said to Jenny, nodding to the spot between them. “Where he belongs.”
(Chapter 84, "The Right of It", p. 712)

I just LOVE this bit, with the deliberate "echo" of Ian's line in DRAGONFLY, which has long been my favorite Ian quote of the whole series.


"Like forgiveness, it was not a thing once learned and then comfortably put aside but a matter of constant practice—-to accept the notion of one’s own mortality, and yet live fully, was a paradox worthy of Socrates."
(Chapter 94, "The Paths of Death", p. 774)

Diana has said, on Compuserve, that the one-word theme of this book is "mortality". I don't think that theme is stated as succinctly, or as eloquently, anywhere else in the book.

This is an inside joke that few people outside of Diana's section of the Compuserve Books and Writers Community will understand. The explanation goes like this: One of Diana's favorite phrases, in response to questions, is "Wait and see."  Back in 2008, Cathy MacGregor posted the Gaelic translation of this phrase, and a number of us, including Diana, have been using "fuirich agus chi thu" in the discussions there ever since. I was delighted to see it in print!


"Something like a geyser rose up inside me and burst in my head, the spray of it sparkling with sunlight and diamonds."
(Chapter 102, "Bred in the Bone", p. 809)

I love this description.

How wonderful for Ian that he's found a woman who loves and appreciates him for who he is! I thought this was just the right note on which to end the book.
an echo in the bone diana gabaldon favorite quotes mass-market paperback outlander

I just stumbled over your blog and I really like it. I've put you on my reading list. ;)

I love it when Jamie teases Claire too. In flipping through Outlander the other day I passed by the one where he shows her how to kill him with his dirk, practically daring her to do it. Her reply always cracks me up: "Cocky bastard, it'd serve you right." LOL.

Very fond of the quote re: forgiveness, because it's so true.

What a great book.

PS, your suggestion on the forum re: changing browsers let me log in again. Thanks!

This is one of my favorites:
Jamie has just returned to Claire after visiting Laoghaire. Page 679 hardcover

"Have ye ever been in the slightest doubt that I need ye?" he demanded.

"No," I replied promptly. "To the best of my knowledge you needed me urgently the moment I saw you. And I haven't had reason to think you've got any more self-sufficient since..."

It makes me smile every time I think of it.

I forgot all about that one. Definitely a keeper, and one of those bits that make me laugh out loud every time. Thanks for mentioning it!