I know many of you have been wondering what Diana Gabaldon thinks of the collection of essays I sent her from the OUTLANDER 20th Anniversary Contest. Here is a picture of the final collection that I mailed to her. 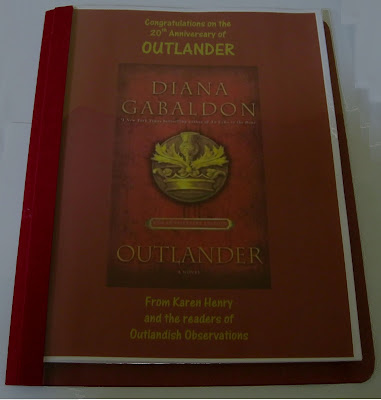 I sent an email to Diana on Tuesday asking whether she'd received the package, and here is what she wrote back:

I did!  And thank you IMMENSELY!  I was saving it to open once SCOTTISH PRISONER was done <g>, so did open it last night, after the launch party at the Poisoned Pen.  I've only had time enough to read the first few essays, but they're wonderful--touching, funny, and just amazingly lovely.  Thanks so much, and yes, of course I'll come by the blog to say thanks in person.

I'm so glad to hear she's been enjoying the essay collection.  Thanks again to everyone who participated in the contest!  And I do hope Diana will stop by here and comment on it, when she's had a chance to read through the whole collection.  [UPDATE 7/17/2011 8:13 am:  She's now done just that!  Click here to see Diana's comments.]

My reaction to the 20th Anniversary Edition

And speaking of reactions <g>....my autographed copy of the 20th Anniversary Edition of OUTLANDER arrived from the Poisoned Pen this afternoon.  I think it was worth the wait, and the extra money, to get a signed copy. 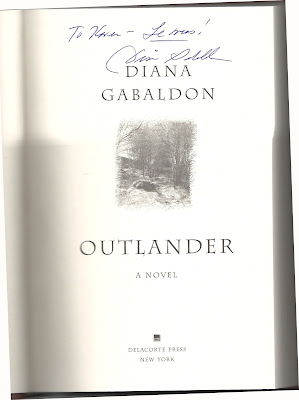 On the plus side:

- I love the look of this book.  Very elegant!  There is something about the "faux-leather" cover that makes me want to squeeze it over and over, just for the pleasure of how it feels in my hands.  I like the ribbon bookmark very much; it's longer than I expected, and the color is lovely.

- I love the map!  It really helps to see the approximate locations of many of the places in the books.  I was surprised that Ardsmuir is so far north; I didn't really have any concept of where it was located.  My only quibble is that I wish Helwater was marked on this map.  (And yes, I know it's not mentioned until VOYAGER, but then, neither is Ardsmuir.)

- The lengthy description of Diana's writing process was fascinating, even though I'd seen some parts of it before.  The part that is new to me is the detailed explanation (starting on page 634) of how she fiddles with every word in every sentence, to get it just right.  No wonder it takes her so long to finish a book, if she's spending this much time and effort fine-tuning every sentence!

- Diana says she wants an octopus on the cover of Book 8.  I may actually have been the first one to suggest that, in a discussion about possible Book 8 titles on Compuserve in October, 2010.  (Not looking for credit, of course, just noting that I came up with an idea that Diana seems to like quite a bit.)

- Kudos to my friend Cathy MacGregor for the wonderful Reader's Guide to OUTLANDER that is included with this book.  She clearly put a lot of time and thought into it, and it shows.  I hope we'll see similar Reader's Guides for the other books, eventually.

- I will miss that striking blue cover, which is the reason OUTLANDER caught my attention in the bookstore almost five years ago.

- I didn't really care for the new song on the OUTLANDER: The Musical sample CD.  (Although the other three songs are some of my favorites.)  I will have to listen to it a few more times just to be sure, but my first reaction was that the songwriter didn't really get the relationship between Claire and Dougal very well. Too bad.

Karen, your presentation of the essays is lovely - well done! I can't wait to hear more of what DG thinks of it.

I have my 20th anniversary edition (though not signed - I've decided to wait to get a signed copy of "something" when I finally get to meet DG in person someday), and I agree that it is just so squeezable! lol Up until now I've only had paperback copies of Outlander (large and small), so this will be the hardcover version in my collection.

I haven't had a chance to sit down and read it yet, but I have skimmed through some of the extras. I also enjoyed the map very much! But I had the same thoughts about Helwater. I guess we'll have to wait for Outlandish Companion II for that?? ;-)

I hadn't heard the songs from OUTLANDER: The Musical before (maybe a bit of one on YouTube, but that's all). I agree, the song between Claire and Dougal was a bit awkward, but I have to say that the one about why Claire and Ian married Frasers cracked me up!

DG's OL Daily Lines have made me realize just how much I've missed "young" Jamie and Claire early in their relationship, so when I finish my re-read of Echo I'll be ready to dive into my "new" Outlander! :-)

I'm glad Diana likes the essays. Maybe she has enough time now to read them on the plane. ;)

Just wanted to come by in person to thank you all--so much!--for the wonderful book of essays. They're delightful: funny, heart-wrenching, and everything in between. Thanks so much for giving me these little pieces of yourselves; I treasure them.

We're thrilled that you like the essay collection! It was a lot of fun to put together, and I was very pleased by the variety of responses.

It seems to me that "They're delightful: funny, heart-wrenching, and everything in between" is a pretty good description of the way many of us feel about your books. <vbg>

Thanks very much for stopping by here, and have a wonderful time in Scotland!

Is there any chance you might give your readers here access to the essays? I'd love to know what other readers submitted.

Well, the problem with that is that some of these stories are VERY personal, and I wouldn't share them (certainly would not post them in public) without the authors' permission.

I'm loving my 20th anniversary copy! It's just so pretty! {g} And the extras like the map and the wedding vows! Love them...

I haven't listened to the CD sampler yet, but I'm looking forward to it...

Thank you again, Karen, for the chance to be a part of the gift to Diana!

You're welcome. :-) I'm glad it worked out so well. Hope you enjoy the new book!

Thank *you* Diana. Karen, it was such a great idea, I'm glad I got to participate!

So Karen - What did Diana pen in your cover? Please interpret! Thanks

It says "Le meas". Someone asked about it yesterday on Compuserve, having received the same inscription in her book, and Diana answered that it means "with respect", or "best wishes", in Gaelic.

Thanks! I received one with that inscription and was stumped. But knew you'd know.