Diana Gabaldon's THE FIERY CROSS (the unabridged version, read by Davina Porter) is in Audible.com's 2012 Tournament of Audiobooks! 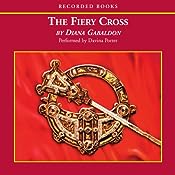 The first round pits THE FIERY CROSS against Erin Morgenstern's THE NIGHT CIRCUS.  Now, THE NIGHT CIRCUS was a very enjoyable book (I reviewed it last year), but considering how long Diana's fans waited for FIERY CROSS to be made available on Audible, I think we can get a lot of people mobilized to vote.

Here's the description of the first-round matchup, from Audible's tournament page:


The Fiery Cross was finally made available in unabridged digital audio and added to our store last year, and author Diana Gabaldon and narrator Davina Porter, whose fans are numerous and loyal, have thrilled us in tournaments past. But the newbie Morgenstern has aligned herself with veteran narrator Jim Dale to turn out a tour de force. Cross has a higher overall rating, sure, but it doesn’t have the momentum of the Circus.

Prediction: Close, but the fire goes out at night; Morgenstern 53-47.

I strongly disagree with that last sentence, and with Audible's prediction, and I think we can prove it.  To cast your vote, go here, click on "Customer Favorites" at the top, find the picture of THE FIERY CROSS, and click the "View Matchup" button to vote.

Apparently you don't have to live in the US in order to vote.  And I don't think you have to have an audible.com account in order to vote, either, because I wasn't logged in to my audible account when I voted yesterday.

Nenya - that's great! Thanks for letting us know that people outside the US can vote, too. :-)