1) The picture above shows a groundhog kiln from the Seagrove, NC, area (where traditional methods of pottery-making are still in use in many of the small local potteries). If you have any interest in this sort of thing, the Seagrove potteries are definitely worth a visit!


Roger scrambled up out of the deep part of the pit into the shallower end of the kiln.  Jamie stood in the part where the fire would go, according to Brianna, with a chimney to be raised over it.  Items to be fired would sit in the longer, relatively shallow part of the pit and be covered over. After a week of shoveling, Roger was less inclined to think the distant possiblity of plumbing was worth all the labor involved, but Bree wanted it--and like her father, Bree was difficult to resist, though their methods varied.

I don't know if Brianna ever finished her project to make clay pipes for running water before going back to the 20th century, but the kiln she built sounds very similar to the one shown above.

2) Claire's spirit animal is the White Raven, pictured above.  I like the story Nayawenne tells in DRUMS about the white raven:


"My husband's grandmother says that when she dreamed of you, it was here." Gabrielle gestured over the pool, and looked back at me with great seriousness.

"She met you here, at night.  The moon was in the water. You became a white raven; you flew over the water and swallowed the moon."

"Oh?" I hoped this wasn't a sinister thing for me to have done.

"The white raven flew back, and laid an egg in the palm of her hand. The egg split open, and there was a shining stone inside. My husband's grandmother knew this was great magic, that the stone could heal sickness."

Nayawenne nodded her head several times, and taking the amulet bag from her neck, reached into it.

"On the day after the dream, my husband's grandmother went to dig kinnea root, and on the way, she saw something blue, sticking in the clay of the riverbank."

Nayawenne drew out a small, lumpy object, and dropped it into my hand. It was a pebble, rough, but undeniably a gemstone. Bits of stony matrix clung to it, but the heart of the rock was a deep, soft blue. 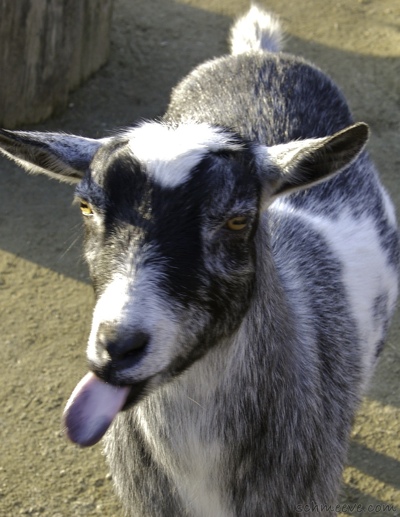 3) Did you know that goats have long purple tongues?  I didn't, until I happened to notice this reference in A BREATH OF SNOW AND ASHES just a few days ago:


The goat had stopped making noise, having recognized me, but was now stretching her neck through the railing of her pen, blueberry-colored tongue extended like an anteater's, in an effort to reach an apple core that had rolled near the pen.  I picked it up and handed it to her, trying to think where to start, and what to say when I did. 4) The objects shown above are gaberlunzie badges, like the ones carried by Jamie's friend Hugh Munro. The one on the left is from Huntly Parish, Scotland, and the one on the right comes from Old Aberdeen. (Click on the pictures to enlarge them.)

5) Remember the scene in THE FIERY CROSS where Roger is trying to write down the words to a ballad called "Jamie Telfer of the Fair Dodhead", while Bree is dealing with a middle-of-the-night potty emergency involving wee Jemmy?

The insidious term had somehow taken up residence in Roger's mind, and was merrily replacing half the fading words of the verse he had been trying to recapture.

Willie sat upon his pot/the sword to potty gane...

He shook his head, as though to dislodge it, but it was too late--the real words had fled.

Just out of curiosity, I looked up the words to this ballad.  Here is the bit Roger was trying to remember.  The spelling is a little different in this version than the way it appears in FIERY CROSS, but it's clearly the same ballad:

190A.32 ‘I winna let the kye gae back,
Neither for thy love nor yet thy fear;
But I will drive Jamie Telfer’s kye
In spite of every Scott that’s here.’

190A.34 Then till’t they gaed, wi heart and hand;
The blows fell thick as bickering hail;
And mony a horse ran masterless,
And mony a comely cheek was pale.

190A.35 But Willie was stricken ower the head,
And through the knapscap the sword has gane;
And Harden grat [wept] for very rage,
Whan Willie on the grund lay slane.

Look here to see the whole ballad.  And here is a summary of the story in modern English, in case you find the archaic spelling and the Scots dialect too difficult to follow.

Karen, I've only discovered these Friday Fun Facts today...don't know where I've been. I just LOVE them and could read these bits all day long. I guess next Fri. will have to do though. Thank you for all you do for us... Janell

Another great collection, Karen! The white raven photo was my fave this week. :) Theresa

I'm really glad you're enjoying the Friday Fun Facts! I find this sort of thing fascinating, too. Be sure to stop by next week for more. :-)

Thanks! I'm glad you liked the White Raven. :-)

Hello Karen! Couldn't have Internet access yesterday so I had to catch up today..1st of all I read FFF,great!I must say I had to buy a new copy of "Outlander" bc my first copy is in my house in Greece and I had to get the book HERE with me!! The white raven is beautiful, are there white ravens in my country?I don't know..We have a lot of black ones in our area, coming in my garden when I feed sparrows.good w.e.take care.Christiane

Thank you! I always read my Outlander books with my phone by my side to look up words I don’t know. Came across your blog when looking up “gaberlunzie badge””. I’ll be adding your blog to my research!