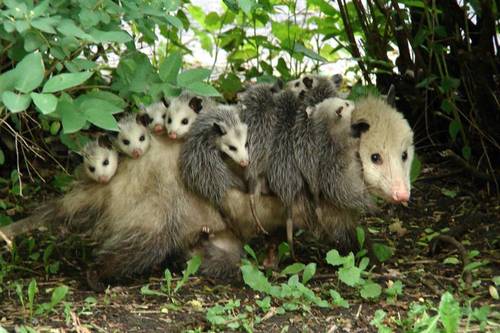 1) I have never seen a possum in real life <g>, but I think this picture must be very similar to what Jamie and Claire saw in DRUMS:

Jamie and Rollo regarded the possum with identical looks of calculation, assessing its plumpness and possible speed. Four small possums stared solemnly back, pointed noses twitching over their mother's humped, indifferent back. Obviously thinking the boat no threat, the mother possum finished lapping water, turned, and trundled slowly into the brush, the tip of her naked thick pink tail disappearing as the lantern light faded.

The two hunters let out identical sighs, and relaxed again.

(From DRUMS OF AUTUMN, chapter 9 ("Two-Thirds of a Ghost"). Copyright© 1997 by Diana Gabaldon. All rights reserved.)


"And what of you, my bonny Sassenach?" he asked, grinning. "Did ye have the wee laddies panting at your heels, or were ye shy and maidenly?"

"A bit less than you," I said circumspectly. "I was eight."

"Jezebel. Who was the lucky lad?"

"The dragoman's son. That was in Egypt. He was nine."

"Och, well, you're no to blame then. Led astray by an older man. And a bloody heathen, no less."

What exactly is a dragoman?  According to Wikipedia,


A dragoman was an interpreter, translator and official guide between Turkish, Arabic, and Persian-speaking countries and polities of the Middle East and European embassies, consulates, vice-consulates and trading posts. A dragoman had to have a knowledge of Arabic, Turkish, and European languages.

The position took particular prominence in the Ottoman Empire, where demand for the mediation provided by dragomans is said to have been created by the resistance on the part of the Muslim Ottomans to learn the languages of non-Muslim nations. 4) Remember the "deasil charm" that Jocasta recited as protection for baby Jemmy in THE FIERY CROSS? "Deasil" is the English spelling of the Scottish Gaelic word "deiseil", meaning "sunwise", i.e., in a circle from east, to south, and so on. And according to this site, it's pronounced djay-shel.

So Jocasta is following a very old Celtic tradition in asking Brianna to perform this ritual.


Jocasta stooped to the kindling basket and groped among the bits of debris, coming up with a long pine twig in her hand, the bark still on it.

"Take that," she commanded, holding it out toward Brianna. "Light the end of it from the hearth, and walk ye round the bairn three times. Sunwise, mind!"

Mystified, Brianna took the stick and thrust it into the fire, then did as she was bid, holding the flaming twig well away from both the makeshift cradle and her blue wool skirts. Jocasta tapped her foot rhythmically on the floor, and chanted, half under her breath.

She spoke in Gaelic, but slowly enough that Brianna could make out most of the words.

Be each day glad for thee,
No day ill for thee,
A life joyful, satisfied."

I have liked that bit ever since I first read it in the book. You can see a version of it in Gaelic in the Carmina Gadelica, Volume 3. 5) And finally, here's a barrel-type butter churn similar to the one Jamie described in FIERY CROSS.  (Click on the picture to see a bigger version.)


"Oh, no, Father; it was a barrel churn. The sort that lies on its side, aye, with a wee handle to turn it? Well, it's only that she was workin' the churn with great vigor, and the laces of her bodice undone, so that her breasts wobbled to and fro, and the cloth clinging to her with the sweat of her work. Now, the churn was just the right height--and curved, aye?--so as to make me think of bendin' her across it and lifting her skirts, and--"

My mouth opened involuntarily in shock. That was my bodice he was describing, my breasts, and my butter churn!

This has always been one of my favorite scenes in FIERY CROSS, and I think it helps a lot to see what the churn might actually have looked like.

Har har trust Australia to have fish fallin' from the sky! I had heard of this before and now I know why, it happend about 45 minutes drive from my place! Thanks for sharing Karen, loved the butterchurn reminder :)

good morning Karen!No way to miss your FFF!I do love animals you know and the possum family is so cute and lovely!!Reading DG's books AND your blog I learn so many new words,"dragoman" for ex. Regarding fish-falls, that's amazing,I remember that from Voyager, yes,I've read about this meteorological phenomen before.The "deasil charm" reminds me of so many similar practise(pagan) modern Greek people still believe in.Thankyou Karen,"see you" next week. Take care.Christiane

I absolutely love all of these. Thanks for the butter churn picture. I laugh so hard during this part. It is so very funny. I have listened audibly to this series four times. Another of my favorites is around the same time in Fiery Cross when Claire is given the head covering from the Granny and Jamie sees her in it completely surprised....he says...is that you Sassenach????

Love the Friday Fun Facts Karen! Thanks for putting them together :)

My main character is sort of a dragoman... more of a scribe... and a very charismatic one [g]
Jamie kinda has that ability too! Captain Alessandro and all :-)

@Deniz - that's interesting. I honestly didn't know what a dragoman was until I looked it up for the FFF last week. :-)