1) Lord John and Percy viewed this 17th-century portrait of George Villiers, 1st Duke of Buckingham, at an art exhibit in BROTHERHOOD OF THE BLADE.  I think this scene is much more effective if you read it with this picture in front of you.

It was the famous Larkin portrait of George Villiers, first Duke of Buckingham. The duke, slender as a sylph in white silk hose, and bejeweled like a dagger hilt, gave them back a grin of slightly frenetic gaiety, below a pair of knowing eyes.

After a long moment, Percy turned to him, with a nod at the portrait.

"What do you think?"

"No doubt about it, I should say."

They looked at the portrait together, standing quite close; he could feel the warmth of Percy's arm brushing his.

"Odd, how it shows on some men, but others--" Percy shook his head, then glanced at Grey with a smile. "Not you, John."

2) Baboons really do have red behinds. <g>  This scene from VOYAGER always makes me laugh, but I didn't realize until this week, when I finally took the time to look it up, just how apt Claire's comparison was.


"A baboon," I said, enjoying the sight of his muscular back flexing as he scrubbed, "is a sort of very large monkey with a red behind."

He snorted with laughter and choked on the willow twig. "Well," he said, removing it from his mouth, "I canna fault your observations, Sassenach." He grinned at me, showing brilliant white teeth, and tossed the twig aside. "It's been thirty years since anyone took a tawse to me," he added, pressing his hands tenderly over the still-glowing surfaces of his rear. "I'd forgot how much it stings."

Here's an article explaining why baboons have red bottoms.

3) Here's the Pitlochry Dam and Fish Ladder, mentioned in AN ECHO IN THE BONE. (Click on the photo for a bigger view.)


Brianna paused by the fish-viewing chamber. It wasn’t yet the breeding season, when--she’d been told--the great salmon swarmed through the chutes of the fish ladder that allowed them to climb the dam at Pitlochry, but now and then a silvery flash shot into view with heart-stopping suddenness, fighting strongly against the current for a moment before shooting up into the tube that led to the next stage of the ladder. The chamber itself was a small white housing let into the side of the fish ladder, with an algae-clouded window. She’d paused there to gather her thoughts--or, rather, to suppress some of them--before going in to the dam. 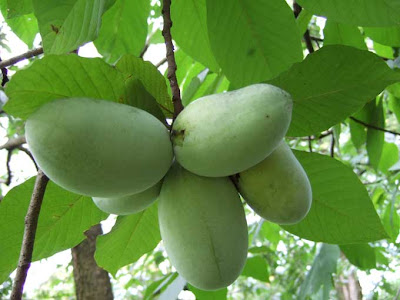 4) It seems to me that it would be awfully difficult for someone from our own time to survive on their own in the wilderness of the 18th century, foraging for food in the woods and so on.


Fortunately for Otter-Tooth--if it was indeed he--he had been familiar with a number of edible plants, and seemed extremely pleased with himself for recognizing pawpaw and persimmon.

"Recognizing a persimmon is no great feat, for God's sake," I said. "They look like orange baseballs!"

"And they taste like the bottom of a chamber pot," Jamie added, he not caring at all for persimmons.  "Still, he was hungry by that time, and if ye're hungry enough..."

I have to say, I sympathize with Otter-Tooth's predicament here, and I think Claire's being rather hard on him.  I don't suppose Robert Springer had ever seen the "exotic" fruits pictured above in his local supermarket!  (I haven't either, for what it's worth. <g>  Which is one reason I'm including the pawpaws and persimmons on this week's list.)

5) White phosphorus (pictured above) was used to make matches, starting in 1831, but it was so toxic that its use was banned by many countries by the end of the 19th century. Here's a fascinating video showing what it can do.  (The video is a little long, but the interesting part is in the first 4 minutes.)

It definitely doesn't seem like the sort of thing that's safe to keep in a small cabin with an inquisitive toddler!  I love Roger's reactions in this scene:


"And you intend to do...what with it?" he asked, trying to keep any note of foreboding from his voice. He had the vaguest memories of hearing about the properties of phosphorus in his distant school days; he thought either it made you glow in the dark or it blew up. Neither prospect was reassuring.

"Wellll...make matches. Maybe." Her upper teeth fastened momentarily in the flesh of her lower lip as she considered the jar. "I know how--in theory. But it might be a little tricky in practice."

"Why is that?" he asked warily.

"Well, it bursts into flame if you expose it to air," she explained. "That's why it's packed in water. Don't touch, Jem! It's poisonous." Grabbing Jemmy round the middle, she pulled him down from the table, where he had been eyeing the jar with greedy curiosity.

"Oh, well, why worry about that? It will explode in his face before he has a chance to get it in his mouth." Roger picked up the jar for safekeeping, holding it as though it might go off in his hands. He wanted to ask whether she were insane, but had been married long enough to know the price of injudicious rhetorical questions.


"Karen-- You're kidding; you never saw baboons at the zoo? <g> Congratulations on another entertaining week--I'm _very_ impressed at you digging up not only the Duke of Buckingham, but also Pitlochry dam!"

Karen, thanks for taking time to do this for us. I love seeing background, detail information about books I've read or am reading. I've read all the Outlander books several times and am now reading Scottish Prisoner. Thanks for all your hard work.
Kathy

Good morning Karen, just read today's FFF,great job once more! As a matter of fact I'm currently reading L.J.and the Brotherhood of the Blade but I'm only around Chapter6!Love the book very much AND Lord John,getting to know better and better what kind of wonderful person he is, not yet on chapter 19 though. I laughed too seeing the baboons "red behinds"!!Once more, I catched a word new to me:"persimmon".I know this fruit actually,we can find it on the open-air markets in France and Greece,and persimmon-trees grow in Greece because of the warmer climate.I tried that fruit but I didn't like the taste at all!!!The video about white phosphorus is really fascinating! Thankyou so much Karen.Take care.Christiane

Karen, these are wonderful as always. You were so right about reading the description of Villiers while viewing the portrait. And, you make a great point about foraging abilities, or lack there of. My grandmother had a persimmon tree, but I doubt I would recognize one today.
Thank you!

@Kathy - thanks! That's one reason I started doing this, because I'm fascinated by what the various things/people/places mentioned in the books actually looked like -- and so are a lot of other people, apparently! :-)

@Christiane - I think the phosphorus video is really interesting. Glad you liked it! :-)

@Julia - I only found the portrait of the Duke of Buckingham this week. It really helps to bring that scene to life, doesn't it? I have no particular foraging skills myself, so I would probably starve to death in short order in the
18th century, unless I had some help. :-)

I absolutely love your facts...they really add dimension to the stories. I am such a visual thinker, and DG's descriptions are so brilliant, every thing comes to life in my brain, but sometimes the pictures are.a whole new unique experience in themselves!

@Kerry - thanks so much! I think the pictures really help. I find I understand the details so much better when I have a real picture to look at.

Karen
Another great FFF! I especially love the Duke's portrait - those legs!
Catherine

Laura Thornton here. As to persimmons. They used to be quite common in the deep South, not so now. My aunt and unclethe had a persimmon tree and iloved them growing up. Get them really really ripe they are delicious. Get them even a shade 'green' and you'll think you died and did NOT go to heaven! It has a high alum content and will dried up any possible saliva that even thought of reaching your mouth! Hate to disagree with Jamie but chamber pot would not have been my first thought. Used to be a country kid's funny joke to hand a city kid a slightly green persimmon while they ate perfectly ripe ones was considered a laugh riot!