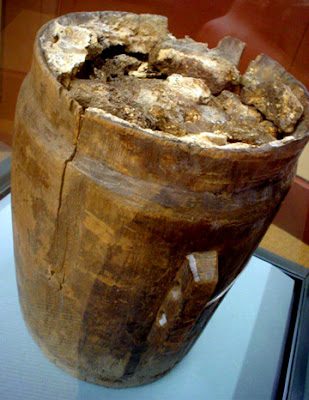 1) This first item comes from THE SCOTTISH PRISONER, in honor of its release in paperback in the US on Tuesday, May 29th.

“Beannachtaí m' mhíc, everyone puts their butter into the bog in summer to keep cool. Now and then, the woman o’ the house forgets just where she put it--or maybe dies, poor creature--and there it sits in its wee bucket. We often find butter when the lay brothers cut peats for the fire. Not often edible,” he added, with regret. “But recognizable, even after a great long while. Peat preserves things.”

I had never heard of bog butter before I read THE SCOTTISH PRISONER.  Here's an article explaining all about it. 2) Here's what Plasmodium vivax -- the organism that causes malaria -- looks like under a microscope (photo from Wikipedia).  As Claire explained to Bobby Higgins,


"Do you see that some of the blood cells are broken? And that some have little spots in them?"

"Parasites. Little beasts that get into your blood if a certain kind of mosquito bites you," I explained. "They're called Plasmodium. Once you've got them, they go on living in your blood--but every so often, they begin to...er...breed. When there are too many of them,they burst out of the blood cells, and that's what causes a malaria attack--the ague. The sludge of the broken blood cells sort of silts up, you see, in the organs, and makes you feel terribly sick."

This diagram shows the life-cycle of Plasmodium vivax.

3) Here's an example of a silver tetradrachm, minted at Amphipolis (Macedonia) around 280-270 B.C, showing a representation of Alexander the Great. I am no coin expert (!) but I think this looks similar to the one that Jamie and Mayer the coin-dealer examined in VOYAGER.


He looked again, picked out a worn gold disc with an indistinct profile, then a silver one, somewhat larger and in better condition, with a man s head shown both full-face and in profile.

"These,” he said. “Fourteen of the gold ones, and ten of the ones with two heads.”

“Ten!” Mayer’s bright eyes popped wide with astonishment. “I should not have thought there were so many in Europe.”

Jamie nodded. “I’m quite certain--I saw them closely; handled them, even.”

“These are the twin heads of Alexander,” Mayer said, touching the coin with reverence. “Very rare indeed. It is a tetradrachm, struck to commemorate the battle fought at Amphipolos, and the founding of a city on the site of the battlefield."

I found the tetradrachm shown above on eBay, selling for $1250.00.  Click on the images to enlarge them.

(UPDATE 5/25/2012 2:58 pm: Someone on Compuserve commented that the tetradrachm shown here is not identical to the coin described in the book. That's true; it's not precisely identical. But it's the best example I could find, and I think it's close enough to give you a pretty good idea of what Jamie and Mayer were looking at.) 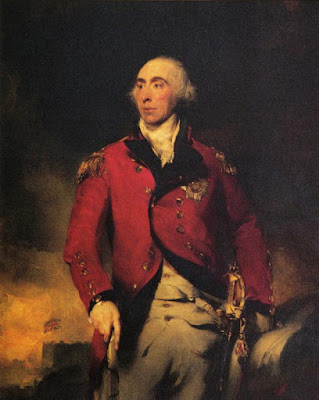 
One of Howe’s commanders, Major General Lord Charles Grey--a distant cousin of Grey’s--attacked the Americans at Paoli at night, with orders to his troops to remove the flints from their muskets. This prevented discovery from the accidental discharge of a weapon, but also obliged the men to use bayonets. A number of Americans were bayoneted in their beds, their tents burned, a hundred or so made captive--and Howe marched into the city of Philadelphia, triumphant, on September 21.

Grey watched them, rank upon rank of redcoats, marching to drum music, from the porch of Mrs. Woodcock’s house. Dottie had feared that the rebels, forced to abandon the city, might fire the houses or kill their British prisoners outright.

A distant cousin of Lord John's?  That made me laugh, the first time I read ECHO.  Sure, why not? I thought.  Everybody else in this book seems to be turning up long-lost relatives or obscure branches of their family tree. 5) The photos above show what a Great White Pelican (Pelecanus onocratalus) looks like.  Diana confirmed, when I asked, that this is the same kind of pelican we saw in VOYAGER.  It certainly seems to fit Ping An's description very well:

Great facts--and thanks for the mention Karen! Yes, Carol and I grew up in Paoli--it's a great little town just a few miles from Valley Forge. We don't get back there often, but next time I make it there I'll have to get a picture of the Paoli historical marker to post on Twitter... :-)

Tracey - I would love to see a photo of the Paoli historical marker, if you or Carol get an opportunity sometime.

Very cool to see your hometown mentioned in one of Diana's books!