1) Remember the rhododendron hell Roger was trapped in while trying to escape from the Indians in DRUMS?  It may have looked something like this.


He took a slow inventory of the damage, listening all the while for sounds of pursuit. Not surprisingly, there were none. He had heard talk about rhododendron hells in the taverns in Cross Creek; half-boasting stories of hunting dogs who had chased a squirrel into one of the huge tangles and become hopelessly lost, never to be seen again.

Roger hoped there was a fair amount of exaggeration to these stories, though a good look around wasn't reassuring. What light there was had no direction. Any way he looked, looked the same. Drooping clusters of cool, leathery leaves, thick stems and slender branches laced together in a nearly impenetrable snarl.

With a slight feeling of panic, he realized that he had no idea from which direction he had come. 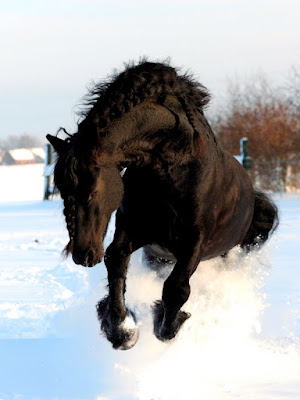 2) I'm sure many of you will remember Phillip Wylie's Friesian stallion, Lucas, from THE FIERY CROSS.  What you may not know is that Diana Gabaldon's German translator, Barbara Schnell, owns several Friesian horses. The top photo comes from Wikipedia (and no, that's not one of Barbara's horses, but I like the wild, untamed look of the stallion in that photo).  The bottom photo, which Barbara was kind enough to share with me from her personal collection, shows one of her Friesians, a stallion named Apollo. Click on the picture for a bigger view.


These black horses had great floating masses of silky hair--almost like women's hair--that rose and fluttered with their movements, matching the graceful fall of their long, full tails. In addition, each horse had delicate black feathers decorating hoof and fetlock, that lifted like floating milkweed seed with each step. By contrast to the usual rawboned riding horses and rough draft animals used for haulage, these horses seemed almost magical--and from the awed comment they were occasioning among the spectators, might as well have come from Fairyland as from Phillip Wylie's plantation in Edenton.

You can see more of Barbara Schnell's photos of her Friesians, Apollo and Talisker, in this photo gallery.  (Barbara says, "Lucas, Talisker's sire, inspired Lucas in the book.")  And here's a video showing a young German equestrian, Jessica Süss, riding a Friesian named Zorro at a competition in 2010.  Thanks very much to Barbara for sharing the pictures and links with us!  For more information about Friesians, visit the website of the Friesian Horse Association of North America.

UPDATE 6/4/2012 9:35 am:  I found out today from Barbara Schnell that Zorro, the Friesian stallion shown in the video, died unexpectedly a few days ago.  Look here for details.  Obviously this comes as a big shock to everyone who knew and cared for Zorro.  My condolences to Barbara, and to Jessica! 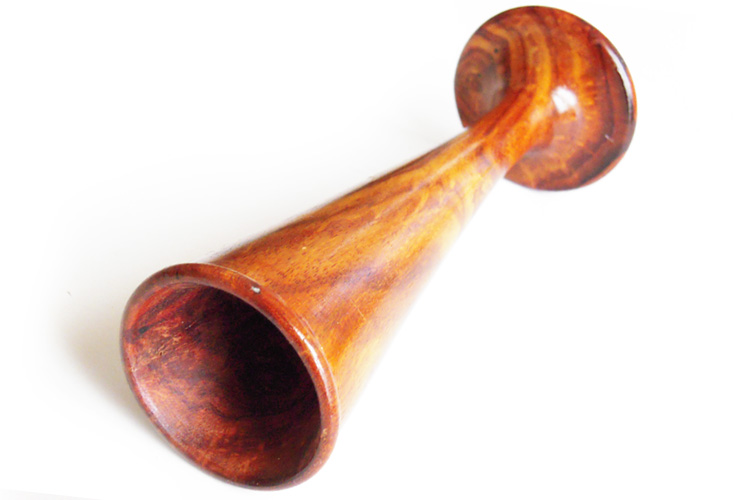 3) The Pinard stethoscope was invented in 1895 as a means of listening to the fetal heartbeat. Here's a brief video demonstrating the use of the Pinard.

It makes sense to me that Claire would have had one of these, as part of her midwife's toolkit. But I can't think of the Pinard without recalling this scene, just after Mandy's birth:


For the hundredth time in two days, I bent close, ear pressed to the Pinard as I moved it over Amanda's neck and chest, hoping against hope that the sound would have disappeared.

"Turn your head, lovey, yes, that's right..." I breathed, delicately turning her head away from me, Pinard pressed to the side of her neck. It was hard to get the stethoscope close to her fat little neck...there. The murmur increased. Amanda made a little breathy noise that sounded like a giggle. I brought her head back the other way--the sound decreased.

"Oh, bloody hell," I said softly, so as not to scare her. I put down the Pinard and picked her up, cradling her against my shoulder. 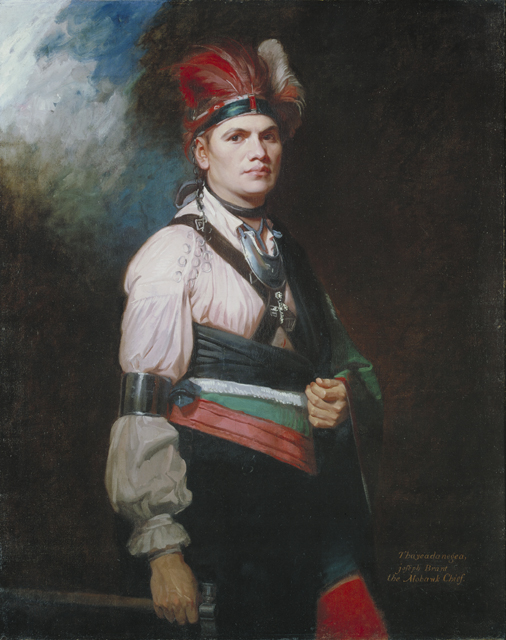 4) The portrait above shows Joseph Brant (also known as Thayendanagea), who is mentioned in AN ECHO IN THE BONE. (Click on the picture for a bigger view.)  Here's Lord John's reaction on seeing this portrait for the first time, at the Beefsteak:


"Who is that?" he asked, startled. The painting, prominently displayed upon the wall opposite, showed a stately Indian, festooned in ostrich plumes and embroidered draperies. It looked distinctly odd, set as it was among the staid portraits of several distinguished--and mostly deceased--members.

"Oh, that is Mr. Brant, of course," Mr. Bodley said, with an air of mild reproof. "Mr. Joseph Brant. Mr. Pitt brought him to dine last year, when he was in London."

Mr. Bodley's brows rose. Like most Londoners, he assumed that everyone who had been in America must of necessity know every other person there.

"He is a Mohawk chief, I believe," he said, pronouncing the word "Mohawk" carefully. "He has been to visit the King, you know!"

"Indeed," Grey murmured. He wondered whether the King or the Indian had been more impressed.

Another bit of trivia that may be of interest to those of you following the 2012 presidential campaign in the US: this portrait was painted in 1776 by an English artist named George Romney.  I was curious about his surname, so I looked him up on Wikipedia, and found that he is in fact an ancestor of Republican presidential candidate Mitt Romney; the artist George Romney was Mitt's great-great-great-grandfather.  (Yes, really. <g>  Mitt's great-grandfather, Miles Park Romney, was the grandson of the artist.) 5) The incident in the tube station during World War II in which Roger's mother was killed is based on a real historical event, a tragedy which occurred at the Bethnal Green tube station in London on March 3, 1943. According to Wikipedia:


As the crowd surged forward towards the shelter, a woman tripped on the stairs, causing many others to fall. Within a few seconds 300 people were crushed into the tiny stairwell. 172 people died at the scene, with one more dying in hospital later; 62 of the dead were children.

The photo above (from the UK National Archives) shows what the stairs looked like on the day after the disaster.


"It was a miracle that I hadn't been killed with everyone else on that stair, they told me. They said my mother must somehow have lost hold of me in the panic--I must have been separated from her and carried down the stair by the crowd; that's how I ended on the lower level, where the roof hadn't given way."

Brianna's hand was still curled over his, protective, but no longer squeezing.

"But now you remember what happened?" she asked quietly.

"I did remember her letting go my hand," he said. "And so I thought the rest of it was right, too. But it wasn't.

"She let go my hand," he said. The words came more easily now; the tightness in his throat and chest was gone. "She let go my hand...and then she picked me up. That small woman--she picked me up, and threw me over the wall. Down into the crowd of people on the platform below. I was knocked mostly out by the fall, I think--but I remember the roar as the roof went. No one on the stair survived."

If you look closely at the photo, you can see this low wall at the top right.  Now imagine a small woman with curly black hair, who had the presence of mind in the midst of a horrible disaster, in the moments before she died, to pick up her son and heave him over that wall.  (If you've read "A Leaf on the Wind of All Hallows", you know what happened next, but I won't spoil it for those who haven't read the story.)

How delightful--especially the info on the pinard and the Friesians. Barbara's photographs are amazing. What a lovely way to start my Friday! Thank you!

Love your Friday Fun Facts and especially today with the lovely video of the Friesians. Thanks so much for all the work you put into this each week.

Thanks, Julia, I'm glad you liked it! I agree, Barbara's photos are wonderful. :-)

Belinda - thanks, I'm glad you liked it! And the work I put into these FFF posts seems to be worth it, judging from the reactions. :-)

This week I happened to be listening to the rhododendron hell scene and found myself hoping you'd include it with a picture in your FFFs and here it is! Great as always

I'm re-reading The Fiery Cross and wondered if you have any pictures of an astrolabe? No matter how many times I re-read the description in the book I still can't picture it or how it works.

Debbie - I'll put the astrolabe on the list for next week. Thanks for the suggestion! :-)

I am amazed at the work and trivia you gather here Karen! I really enjoy reading these when time allows but I know I won't every TRY to compete against you during JudyL's trivia contests! However being IN Scotland will be enough of a win for me!

Hi Betsy, it's really good to see you commenting here on my blog! I can't believe we'll be in Scotland in less than two months (!) I'm glad you're enjoying the Friday Fun Facts. And I haven't talked to Judy about that trivia contest, but I've been thinking I should maybe volunteer to referee it or something. I definitely want it to be fun for everybody else, too, and it might not be fair if I compete in it. We'll see.

Can't wait to meet you in person!