Home Unlabelled THE SCOTTISH PRISONER is out in paperback!

THE SCOTTISH PRISONER is out in paperback!

5/29/2012 06:37:00 AM
Diana Gabaldon's latest novel, THE SCOTTISH PRISONER, is now out in paperback!  The trade-paperback edition (that's the large size paperback) comes out today, May 29th, in the US and Canada. 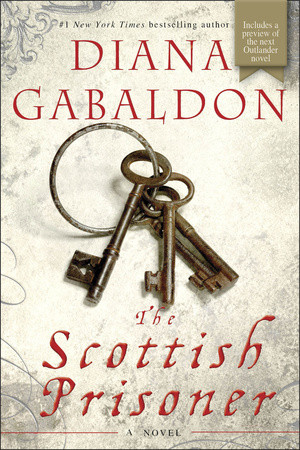 In honor of the occasion, here are a few of my favorite quotes from SCOTTISH PRISONER.  (All quotes are copyright © 2011 by Diana Gabaldon.)


You could tell from the books whether a library was meant for show or not. Books that were used had an open, interested feel to them, even if closed and neatly lined up on a shelf in strict order with their fellows. You felt as though the book took as much interest in you as you did in it and was willing to help when you reached for it.

“Mo!” Willie jerked his hand away and glowered at Jamie under wispy brows that nonetheless were well marked.

“Nnnnn,” Jamie said, leaning down close and glowering in his turn. “Nnnnno.”

“Mo,” he repeated, but with less surety.

“It’s ‘no,’ believe me,” Jamie assured him, straightening up and pulling the bucket of mash closer. “Ye’ve heard your auntie Isobel say it, have ye not?” He hoped Isobel--or someone--said it to Willie on occasion. Not often enough, he was sure of that.

3) Lord John, near the beginning of the story, when Hal asks if he'll go ask Jamie Fraser for assistance with the Wild Hunt poem:


“I would not piss on him was he burning in the flames of hell,” Grey said politely.

One of Hal’s brows flicked upward, but only momentarily.

“Just so,” he said dryly. “The question, though, is whether Fraser might be inclined to perform a similar service for you.”

Grey placed his cup carefully in the center of the desk.

“Only if he thought I might drown,” he said, and went out.

4) John and Stephan and the "marmaliaison":


It was true that Stephan had limited experience, no artifice, and not much natural skill. But Grey had forgotten that Stephan was a horseman, and a breeder and trainer of dogs. He didn’t need words to understand what an animal--or a person--was feeling. And he knew what “slowly” meant.

5) This exchange between Jamie and Lord John makes me laugh:

“Aye. I’ll tell wee Byrd to lay hold of a couple of burlap bags, then.”

“To wear over our heads when we break in to Siverly’s house.”

Grey had stopped in the act of putting his signet back on and eyed Fraser.

“Haven’t much faith in my powers of diplomacy, have you?”

“No, and neither has your brother, or I wouldna be here.”

6) Jamie's thoughts of Claire are just heartbreaking.  I kept wanting to assure him, "Don't worry, she's fine.  You'll see her in a few years."

This wasn’t phrased as an invitation, and Jamie made no argument when a sizable dram was poured and shoved into his hand. He lifted the glass mechanically toward the abbot in acknowledgment, but didn’t speak; he was too busy repeating over and over within himself, Lord, that she might be safe! She and the child! as though fearing the abbot’s words had indeed sent her to heaven.

7) I'm VERY flattered to have a character in this story named for me <vbg>, but I hasten to add that Keren-happuch bears no resemblance to me in terms either of personality or religious beliefs!  (And it goes without saying that I like Jamie considerably more than my alter ego does. <g>.)


He lingered for a moment after breakfast, to speak to Keren-happuch, the middle-aged Welsh kitchen maid, who liked him in a reserved, thin-lipped, dour sort of way. She was deeply religious, Keren--as evidenced by her name--thought him a Roman heretic, and wouldn’t stand for carryings-on in any case, but when he told her that he had come back with news for Betty of a kinsman, she was willing to take his message. Everyone would know, of course, but under the circumstances, that wouldn’t matter. At least he hoped not.

Hope you enjoyed these!  And if you haven't yet read THE SCOTTISH PRISONER, I would definitely recommend it.  You can see my review here.

Good morning Karen! Enjoying your quotes! Here in Europe we already have got the large size ppbk (was on sale around dec.2011).I remember every quote vividly being nearly at the end of SP(love the book!).I love the parts so much when Jamie happens to have 2 y.old Willie with him ! awfully moving, brings tears to my eyes..I'll wait eagerly to see how they'll develop a relationship in a coming book.. "Lord that she might be safe..."yes, that would be great indeed if we could tell him not to worry!When I read the name "Keren" I thought about you, really! Thankyou Karen, all the best.