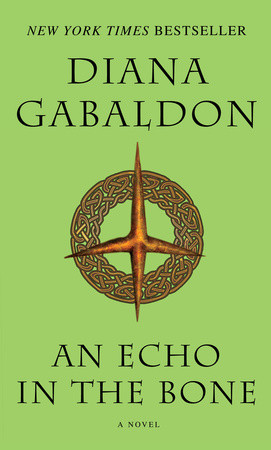 As I've mentioned here before, I'm thoroughly addicted to the OUTLANDER audiobooks, read by Davina Porter.  It takes me at least a year to get through the whole series in order, listening for half an hour to an hour most days, usually while driving to and from work.

I finally finished listening to AN ECHO IN THE BONE this morning.  As always, it's sort of an odd feeling to come to the end of the series at last.  I feel happy, satisfied, but also rather emotionally worn out.

I found that I enjoyed ECHO somewhat more this time around than the last.  Even the long Jamie-less section in Part 4 (where the focus of the action turns away from Jamie and Claire, and we spend a great deal of time in William's point of view) was easier to get through this time -- possibly because I had forgotten how much I like both Denny and Rachel. <g>

The last part of ECHO is always hard to get through (I did cry a little at Ian's death, again), but somewhat to my surprise, I found myself able to enjoy the infamous "morning-after" scene between Claire and Lord John, in a way I never have before.  For the first time, I was able to relax enough to see the humor in it.  I laughed in a few places, and I particularly enjoyed Lord John's story about the white deer.

It took 33 months, but I think I've finally come to a point where I can enjoy this part of the book as much as any other, without my own initial strongly negative reaction getting in the way.  I promised Diana that I'd get over it, eventually.  I think as of today, I finally have. <g>  (Please note, this is just my own personal reaction, and I certainly don't mind if others feel differently.)

If you want to see my initial reactions to the Claire/Lord John subplot (posted here, and on Compuserve, only a few weeks after ECHO was first published in 2009), look here and here.  And those of you who had a hard time with the last part of the book may want to take a look at some of Diana's explanations, from March 2010, of why the last part of ECHO was constructed as it was.

I will probably start over with OUTLANDER next week, with the goal of getting through as much of it as I can before I leave for Scotland on June 29th.  Besides, I love the experience of going back to the beginning of the series, watching the characters "de-age" by thirty years, etc.  Seeing Jamie and Claire fall in love all over again always puts me in a good mood. <g>
an echo in the bone claire and lord john diana gabaldon finishing the outlander series outlander audiobooks

I love noticing little details/nuances that I missed the first time around, because I was so eager to find out what happened next. I agree Karen- I too can't wait to reach the end of the series so I can start over/'watch' Jamie & Claire fall in love all over again, sigh...

It's nice to have the validation that others are as obsessed as I am. I'm just grateful I waited till I retired to discover the books. Otherwise I would have been useless at work after the late nights immersed in the outlander world.

I've been reading the whole series again. I started the end of last year and now I'm reading Echo. This is the first time I've re-read Echo and I'm finding that I really don't remember much of the bood at all. Which is kind of good as it's like reading it for the first time. I think I've read Outlander a dozen times and can recall all of the plots. It's interesting and I can't wait for the MOBY to come out next year. Have a great trip to Scotland. I went with my sister in 2002 after she had gotten me hooked on the Outlander books. I loved Scotland and can't wait to go back again someday.

I totally agree and understand your reaction after a re-read (or in your case listen) because that is exactly how I felt too.

I cannot wait to read your updates from your Scotland trip!

What a Coincidence, I Just Finished AN ECHO IN THE BONE on Audio CD last night!
I also feel a bit "Wiped out" and a bit saddened,Having to wait for WRITTEN IN MY OWN HEARTS BLOOD to come out. This was only my second re-read of ECHO, which I took my time reading going over some parts I didn't quite understand and savor over it more because the new book is still about a year away. Meanwhile, I will busy myself with the LORD JOHN series and start Over with OUTLANDER, Hopefully by the Time of my Third re-read of ECHO I can Open up A lovely copy of WRITTEN IN MY OWN HEARTS BLOOD.

I read Diana's explanation & now I'm thinking....why does Claire seem so strong to me? When in fact it seems she's really very weak "without Jamie". I'm not happy with this revelation. Reading that scene again between her & LJ in Echo literally scares the crap out of me. I want to re-read the whole series but I'm not sure I can handle Echo just yet.