1) The photo above shows the aurora borealis as seen from Quebec.  From William's Christmas Eve, 1776, letter to Lord John:


Did you see the aurora borealis when you were here, or was it too early in the Year? It is a most remarkable Sight. Snow has fallen all Day, but ceased near Sunset and the Sky has cleared. From my Window, I see a northern Exposure, and there is presently an amazing shimmer that fills the whole Sky, waves of pale blue and some green— though I have seen it to be red sometimes— that swirl like Drops of Ink spilt in Water and stirred.

Here's a video showing many different aurora borealis photos from around the world.  Just gorgeous!  And here is an explanation of the phenomenon, from the Northern Lights Centre in Canada.  I have never seen the aurora borealis. Have you?  And if so, where did you see it? 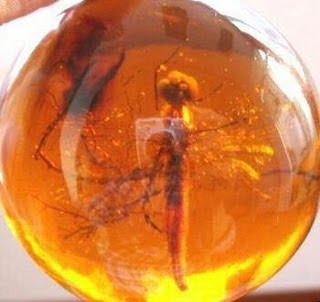 2) I've always imagined that the dragonfly in amber that Hugh Munro gave Claire as a wedding present in OUTLANDER might have looked like the one shown above.


I had not seen Hugh Munro again, but I had wakened in darkness the night before to find Jamie gone from the blanket beside me. I tried to stay awake, waiting for him to return, but fell asleep as the moon began to sink. In the morning, he was sound asleep beside me, and on my blanket rested a small parcel, done up in a sheet of thin paper, fastened with the tail-feather of a woodpecker thrust through the sheet. Unfolding it carefully, I found a large chunk of rough amber. One face of the chunk had been smoothed off and polished, and in this window could be seen the delicate dark form of a tiny dragonfly, suspended in eternal flight.

3) I always have to smile at this bit, because Jamie's too happy (and too obviously in love <g>) to be self-conscious about his singing voice.


He patted one of my rounder bulges and left for the stables, singing rather loudly the air from “Up Among the Heather.” The refrain floated back from the stairwell:


“Sittin’ wi’ a wee girl, holdin’ on my knee--
When a bumblebee stung me, weel above the kneeeee--
Up among the heather, at the head o’ Bendikee!”

He was right, I decided; he didn’t have any ear for music.

If you click on the video above, you'll hear an audio recording of the Irish Rovers performing "Up Among the Heather".  The lyrics to the Irish Rovers version are a little different from Jamie's, but it's recognizably the same song.

4) Here's a poignant moment that shows how Jamie and Claire sometimes think alike, despite their very different personalities.  In this scene from DRUMS, they're remembering their first daughter, Faith.


"I never told you--when we were in Paris, to see Jared--I went to the Hôpital des Anges; I saw her grave there. I--I brought her a pink tulip."

He was quiet for a moment.

"I took her violets," he said, so softly I almost didn't hear him.

I was quite still for a moment, tears forgotten.

"Neither did you." His fingers traced the bumps of my spine, brushing softly up and down the line of my back.

"I was afraid you'd feel..." My voice trailed off. I had been afraid he would feel guilty, worry that I blamed him--I once had--for the loss. We were newly reunited, then; I had no wish to jeopardize the tender link between us.

I find this really moving, especially for the thought that Jamie, who has little use for flowers, who has never (at that point in his life) given Claire flowers of any kind, took violets to his baby daughter's grave.

5) Some of you may recall Jamie telling Claire in THE FIERY CROSS about a phenomenon called "Zugunruhe" -- the restlessness of birds preparing to migrate.  I looked into this a few years ago and was intrigued to discover that this does indeed have a scientific basis, as shown by a 2006 study. And here is an experiment that sounds very similar to the one Jamie described.

In the diagrams below, you can see the pattern of the birds' footprints in ink, all going in the same direction.

"It was as though they felt the imminence of flight, and the pull of it—-and that disturbed their rest. The stranger it was, because most of the birds that he had were young ones, who had never yet made the journey; they hadna seen the place where they were bound, and yet they felt it there--calling to them, perhaps, rousing them from sleep.”

I moved slightly, and Jamie lifted his hand from my leg.

“Zugunruhe,” he said softly, tracing with a fingertip the damp mark he had left on my skin.

“It’s what Sterne called it--the wakefulness of the wee birds, getting ready to leave on their long flight.”

“Does it mean something in particular?”

“Aye. ‘Ruhe’ is stillness, rest. And ‘zug’ is a journey of some sort. So ‘zugunruhe’ is a restlessness--the uneasiness before a long journey."

(From THE FIERY CROSS, chapter 107, "Zugunruhe". Copyright© 2001 by Diana Gabaldon. All rights reserved.)

The "restlessness before a long journey". That's exactly what I'm feeling this week, as I prepare for my trip to Scotland!

PLEASE NOTE:  This will be my last Friday Fun Facts post for a little while.  Outlandish Observations will go on hiatus for a couple of weeks, until I get back from Scotland.  But I hope to bring back lots of fascinating Scottish facts, along with plenty of pictures and stories from my trip!
aurora borealis diana gabaldon dragonfly in amber friday fun facts outlander pink tulip up among the heather violets zugunruhe

You might see the aurora borealis in Scotland Karen, it's often visible in the Highlands. Mind you, at this time of year it's very late when it goes dark, so you might not.

Have a good trip.

Have a wonderful time in Scotland! I'm about 1 year exactly behind you.

Amazing as always Karen Have a GREAT time in Scotland!

Sorry, that's vague, but I don't want to accidentally spoil something.

Thank you you for the smiles and tears. Have a marvelous trip!

Have a wonderful trip, Karen! I just got back from Scotland (and Orkney) last week. I go every year since it's only a 2½ hour flight to Ed from where I live in SW Finland.

Aurora Borealis is a common phenomenon where I grew up in NW Finland (about 100 miles south of the Arctic Circle). I have fond memories of walking home from school in absolute darkness (it gets dark awful early in the winter) with the bright stars and swirling and shimmering northern lights lighting my way.
Certainly magical, even to a person who's seen them all through her 40 years (minus the years living in the UK and the US). :)

I hope you're having a great trip, Karen!
I'd forgotten how much I love that scene from DoA. And I love the word zugunruhe!