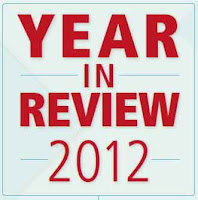 Here are some of my favorite OUTLANDER moments from 2012.

Looking around for something fun and different to use as a blogging meme, I came up with Friday Fun Facts: a collection of "odd, unusual, humorous, or otherwise interesting facts that I've learned from reading Diana Gabaldon's books", as I put it in the original post.  I choose five new facts every week, and post them on Friday mornings.

For something that I created more or less on a whim, the Friday Fun Facts (or FFF, as they've come to be known) have become amazingly popular.  It's very gratifying to me to see how much everyone enjoys seeing what new facts I choose to focus on each week.  And even Diana Gabaldon enjoys them!  She's called them "consistently entertaining", which is a great thrill for me, as you can imagine.

Here's the list of all my Friday Fun Facts posts so far.  And here is the index of topics, organized by book.  (There are well over 200 different items.)  If there's something you'd like to see in a future FFF post, please let me know! 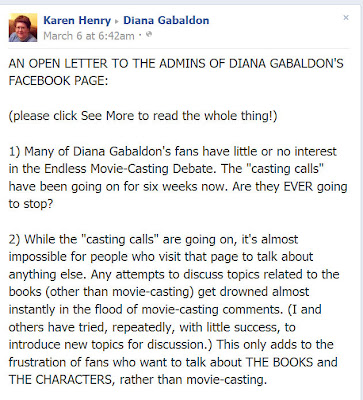 Starting in January, 2012, the admins of Diana Gabaldon's Facebook page began running weekly "casting calls", where fans could post photos of actors they'd like to see in the roles of Jamie, Claire, and the rest, and then vote on their favorites.  The movie-casting talk completely overwhelmed any other discussion on Diana's Facebook page for many weeks, and one day in March, prompted by a discussion on the Monday-night OUTLANDER chat on My Outlander Purgatory in which a number of people had expressed frustration over the nonstop focus on movie-casting, I decided to write an "Open Letter to the Admins of Diana Gabaldon's Facebook Page".

You can see the full text of the letter here.  The response to it was overwhelmingly positive, except for a couple of people who took exception to it on Facebook, and I'm grateful to all of you who supported what I was trying to do.  Including Diana, who passed the message on to the admins, and went out of her way to back me up in public.

In the end it was successful, and Diana's Facebook page has settled into what it was always meant to be in the first place:  a place where fans can get the latest information about new and upcoming releases, talk about the books and characters, share interesting links and photos relating to OUTLANDER, ask questions, and sometimes get answers directly from Diana.  Movie-casting does occasionally come up as a subject for discussion, but it's no longer the sole focus of that page. 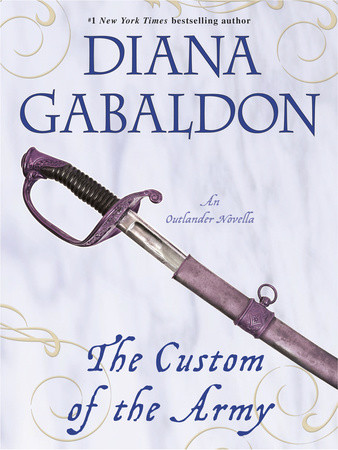 Imagine my shock, and delight, when the e-book edition of Diana's novella "The Custom of the Army" was published in May, and I saw the dedication page: 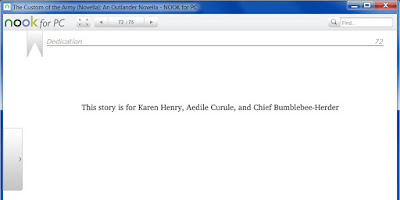 Click on the picture to see a bigger view.  "Aedile Curule" and "Chief Bumblebee-Herder" are references to my role as Section Leader of the Diana Gabaldon folder on the Compuserve Books and Writers Community.

"Custom" is a great story, and now it will mean even more to me on a personal level.  Thank you, Diana!! 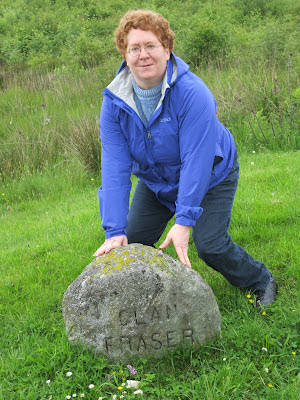 In the summer of 2012, I went on Judy Lowstuter's Celtic Journeys OUTLANDER Tour of Scotland, along with my mom and my sister Alice, and a group of other OUTLANDER fans.

We had a FABULOUS time, and I have so many wonderful memories of that trip!  Look here for my 8-part series of blog posts about the trip.

It really was the trip of a lifetime for me, and I'm so glad I was able to go. Many thanks to Judy for a wonderful tour! 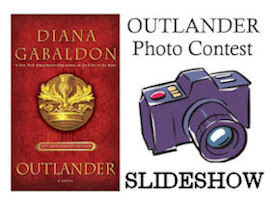 In August, 2012, I decided to hold a contest in honor of the 4th anniversary of Outlandish Observations.  The rules were as follows:


Submit a photo showing one of the following:
Be creative! The only requirements are:


I was amazed by the variety and the creativity of the photos that people submitted.  There were 114 entries in all, and I think they're terrific!  Diana Gabaldon loved the collection, too.  You can see a slideshow with all the contest photos here (be sure to read all the captions!)  Thanks so much to everyone who participated.  I think I might do this again sometime.  It was a lot of fun. Diana Gabaldon made the following comments during a video interview at the Poisoned Pen bookstore on October 23, 2012:

You don't have to take my word for it! Go here to see the video. Diana's comments are at about 39 minutes into it. 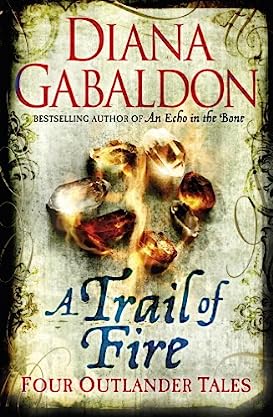 Diana Gabaldon's story collection, A TRAIL OF FIRE, was published in the UK, Australia, and New Zealand on November 8, 2012.  It's a collection of four novellas ("The Custom of the Army", "A Leaf on the Wind of All Hallows", "Lord John and the Plague of Zombies", and "The Space Between"), and I enjoyed it very much!

I laughed out loud when I saw my name listed in the Acknowledgements as "Nitpicker-in-Chief".  That's a reference to the fact that Diana was kind enough to let me have an early look at these stories, and I sent her detailed comments on all four stories.  I'm glad she found my comments helpful.

For more information about A TRAIL OF FIRE, see my FAQ page here. 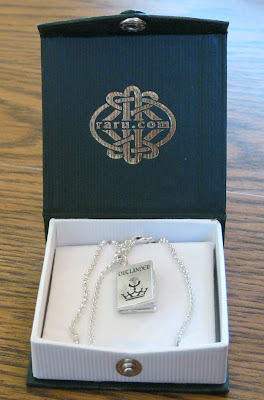 Diana sent me this OUTLANDER book charm as a Chanukah present this year. I think it's lovely. If you'd like one for yourself, you can order them from the Author's Attic.

2012 was a wonderful, unforgettable year for me personally.  And I think 2013 will be a great year for OUTLANDER fans, with WRITTEN IN MY OWN HEART'S BLOOD expected out sometime in the fall.  Happy New Year to all of you!
2012 year in review diana gabaldon outlander

Dear Karen,
thanks a lot for your entertaining postings all over the year, have a wonderful time and all the best for 2013!
Greetings from Austria/Europe from
Susanne :)

Dear Karen, thankyou so much for everything you did for us, Outlander fans, all along 2012, it was really a wonderful year for you! I wish you ALL THE BEST for 2013 with health, peace and joy.2013 is going to be great,we're getting closer to the release of MOBY!!! Best greetings from France.

What a great year for Outlander and Outlandish Observations! Wishing you a happy 2013...Theresa

What a great year and it's all reflected in your blog. Also, it was great fun to visit all those photos again.