1) Have you ever wondered what it's like to write with a quill?  Here are some tips.


I chose a quill from the cut-glass holder on the desk, found a silver penknife by it, trimmed the quill to my liking, uncorked the inkwell, and set about the business, deeply aware of the scrutiny of the two men.

This video, by a re-enactor from Alamance Battleground in North Carolina, demonstrates how to write with a quill pen and ink. 2) This is the interior of a priest hole at Baddesley Clinton, a medieval manor in Warwickshire, England.  (Photos by jedi58 and Brownie_Bear, on Flickr.  Click on the photos to enlarge them.) You'll recall that Claire advised Ian to build a priest hole at Lallybroch.


[Jenny] followed him without comment, down to the stone-floored back hall that separated kitchen and pantry.

Set into the flags of the floor was a large wooden panel, perforated with drilled holes, apparently mortared into the floorstones. Theoretically, this gave air to the root cellar below, and in fact--should any suspicious person choose to investigate, the root cellar, reached by a sunken door outside the house, did have just such a panel set into its ceiling.

What was not apparent was that the panel also gave light and air to a small priest hole that had been built just behind the root cellar, which could be reached by pulling up the panel, mortared frame and all, to reveal a short ladder leading down into the tiny room. It was no more than five feet square, equipped with nothing in the way of furniture beyond a rude bench, a blanket, and a chamber pot. A large jug of water and a small box of hard biscuit completed the chamber’s accoutrements. 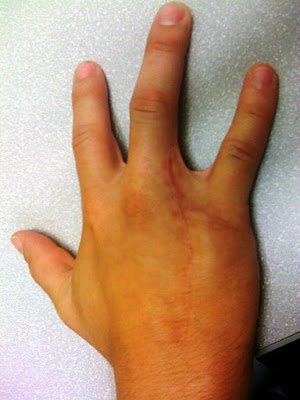 3) This photo shows a hand where the fourth finger has been amputated, just like Claire did for Jamie in ECHO.  (Thanks to my friend Belinda on Facebook, who sent me the link.)


It was a clean, neat job, but I felt a brief sense of sadness as I set the mangled piece of flesh aside. I had a fleeting vision of him holding newly born Jemmy, counting the tiny fingers and toes, delight and wonder on his face. His father had counted his fingers, too. “It’s all right,” I whispered, as much to myself as to him. “It’s all right. It will heal."

Jamie's hand would, of course, have more scars, including the one left by the nail that Black Jack Randall drove into his palm, but otherwise I think this is pretty close. 4) Shinty, known as camanachd in Gaelic, is an ancient Scottish sport resembling field hockey, played with curved wooden sticks. Click on the picture for a bigger view.


"What on earth makes ye mention Letitia?” Jamie asked curiously. “I lived at the Castle for a year, and had speech of her maybe once that I remember, when she called me to her chamber and gave me the raw side of her tongue for leading a game of shinty through her rose garden."

Here's a brief video showing how the game is played today.

For more information about shinty, look here and here.

5) Rose madder is a red pigment made from the roots of a plant called Rubia tinctorum.  It has been used since ancient times to make red dyes, and in fact, rose madder was used to dye British soldiers' uniform coats from the late 17th century until about 1870.

I thought the use of it in DRAGONFLY was pretty clever:


And should any doubt remain, the madder-stained urine gave an absolutely perfect illusion of a man pissing blood as the smallpox attacked his kidneys.

“Christ!” Jamie had exclaimed, startled despite himself at the first demonstration of the herb’s efficacy.

“Oh, jolly good!” I said, peering over his shoulder at the white porcelain chamber pot and its crimson contents. “That’s better than I expected.”

I was surprised to learn that it is traditional in the country of Georgia to dye Easter eggs a deep blood-red color using rose madder, as shown in the photo above.

writing with a quill

Wow! That hand with the amputated finger looks like it's supposed to have three fingers! Amazing!

Karen, I have a cousin that was born without her middle fingers. The knuckle was in the middle of her hand but there was nothing beyond that. When she was a little girl -- before she went to school -- her parents had a doctor remove the knuckle so her other fingers could be drawn together and the hand would look as normal as possible when she went to school. She's a nurse now and this lack has not slowed her down at all.

I've wondered why use of quill pens lasted so long. It seems it would be difficult to hold that narrow, flexible feather shaft. A metal pen nib holds ink better, lasts without constant trimming, and can be attached to a barrel of a size easy to grip. It's not like they did not have metal-working skills!