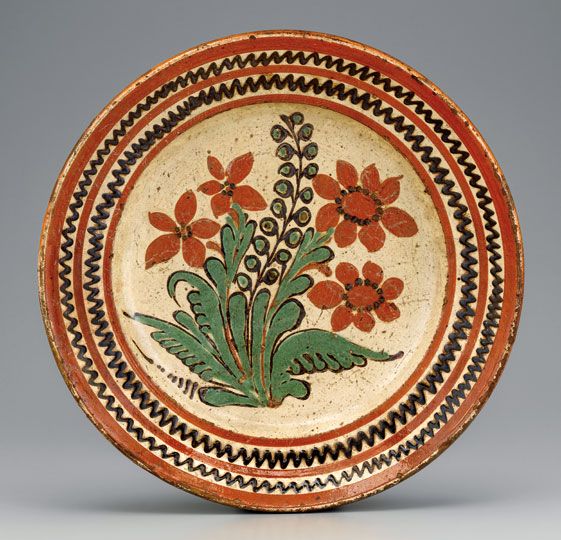 1) This is an example of a pottery dish from the 18th-century Moravian settlement at Salem, North Carolina, dating from 1775-1785, during Gottfried Aust's tenure as master potter.  (Click on the photo for a bigger view.)  I like to think that it might be the very one that Roger and Bree saw in A BREATH OF SNOW AND ASHES:


"Aye, but what about clay?” [Roger] interrupted. “Did ye see that plate at Hilda’s wedding? The big brown and red one, with the beautiful patterns?”

"Ute McGillivray said someone from Salem brought it. I dinna recall the name, but she said he was quite the big noise in potting--or whatever ye call making dishes.”

“I’ll bet you any amount of money she didn’t say that!”

“Well, words to that effect.” He went on, undeterred. “The point being that he made it here; it wasn’t something he’d brought from Germany. So there’s clay about that’s suitable for firing, eh?” My mom and I recently went to see an exhibit at the NC Museum of History in Raleigh, NC, featuring many examples of 18th and early 19th century Moravian and Quaker pottery from the area around Salem and Bethabara (near what is now Winston-Salem, NC).  Some of the pieces are really quite beautiful!  Here's a PDF file with more information, including photos of many of the pieces we saw in that exhibit. 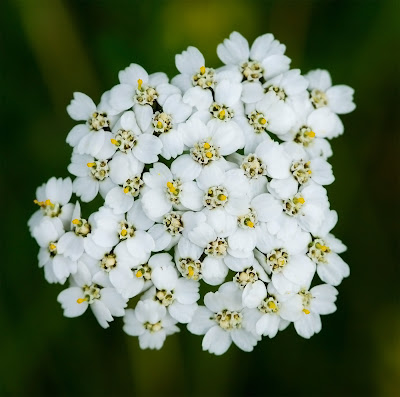 2) This is what yarrow (Achillea millefolium) looks like.  Click on the photo for a bigger view.  Claire frequently mentions yarrow among her medicinal herbs:


Willow bark, cherry bark, fleabane, yarrow. Penicillin was by far the most effective of the antibiotics available, but it wasn’t the only one. People had been waging war on germs for thousands of years, without any notion what they were fighting. I knew; that was some slight advantage.


Yarrow has a vast array of medicinal properties. The volatile oils work as antibacterial, anti-inflammatory and diuretic agents. The tannins are aggressive astringents. The alkaloids are both hypotensive and hypoglycemic. Yarrow even has coumarin in its cells which works as an anti-thrombotic to reduce high blood pressure.

For more information about the medicinal uses of yarrow, look here and here.


She nodded, the memory of her own old room in the house on Furey Street rising around her, vivid as a vision in the smoke. The striped wool blanket, itchy under her chin, and the mattress with the indentation of her body in the middle, cupping her like a huge, warm hand. Angus, the stuffed Scottie with the ragged tam-o-shanter who shared her bed, and the comforting hum of her parents’ conversation from the living room below, punctuated by the baritone sax of the theme music from Perry Mason.

Most of all, the sense of absolute security.

"Perry Mason" was a few years before my time (I was born in 1964), so I don't think I've ever actually watched it, but I always like the pop culture references in the books.  And I think it's interesting that Claire and Frank were evidently in the habit of watching this show together.  Despite the strains in their marriage, they did have a few things in common.

4) This photo shows what a Scottish wildcat (Felis silvestris grampia) looks like.


"Lord help us, it’s the young Scottish wildcat! I thought I’d dealt with you once and for all! Back healed after all, did it? And this is your wife, you say? Quite a tasty little wench, she is, quite like your sister.”

Still shielded by his partly turned body, Randall’s knife-hand swiveled; the blade was now pointed at my throat. I could see Jamie over his shoulder, braced in the window like a cat about to spring. The pistol barrel didn’t waver, nor did he change expression. The only clue to his emotions was the dusky red creeping up his throat; his collar was unbuttoned and the small scar on his neck flamed crimson.

Here's a brief video about Scottish wildcats.  These beautiful animals are on the verge of extinction, due to interbreeding with feral domestic cats.


The wildcat is considered an icon of the Scottish wilderness, and has been used in clan heraldry since the 13th century. The Picts venerated wildcats, having probably named Caithness (Land of the Cats) after them. According to the foundation myth of the Catti tribe, their ancestors were attacked by wildcats upon landing in Scotland. Their ferocity impressed the Catti so much, that the wildcat became their symbol. A thousand years later, the progenitors of Clan Sutherland, equally impressed, adopted the wildcat on their family crest.

Several different clans, including Sutherland, MacPherson, and Mackintosh, have wildcats in their emblems.

5) This famous 1822 painting by John Trumbull, which hangs in the Rotunda of the U.S. Capitol, depicts the surrender of General Burgoyne at Saratoga, which took place on October 17, 1777.


October 17, like all the days that had gone before it, dawned dark and foggy. In his tent, General Burgoyne dressed with particular care, in a gorgeous scarlet coat with gold braid and a hat decorated with plumes. William saw him, when he went with the other officers to Burgoyne’s tent for their last, anguished meeting.

Click on the photo for a bigger view.  In the painting, British Lieutenant General John Burgoyne (in red) attempts to hand his sword to American Major General Horatio Gates (in blue), while American Colonel Daniel Morgan (in white) looks on.  If you look closely at General Burgoyne, you can see the plumed hat in his left hand.

Here is a key identifying each of the men in the painting.  We can assume that William is standing somewhere nearby <g>, along with the rest of the British troops.

It's interesting that you spoke of the Moravian settlement in North Carolina-My sister just returned from a month in the Czech Republic and Poland, where she visited some Moravian sites-we were talking about the Moravians there, and their influence on the Cherokee, especially Sequoyah, and the development of the written form of the Cherokee language. They were certainly an interesting group of talented people.

Oh! The cats! I want to hug them, but know all too well what the result of *that* action would be. ; ) They're gorgeous!

Great research into these items. What a fascinating blog post!!

I always enjoy these fun facts -- thank you for posting them!

That memory of Brianna's of the stuffed Scottie named Angus had me wondering since I first read it. This stuffed dog was first mentioned in Drums of Autumn as being ROGER'S toy that Brianna latched onto.