1) If you've read LORD JOHN AND THE BROTHERHOOD OF THE BLADE, you'll recall the Church of St. Margaret's in Westminster Abbey, London, where Lord John's mother Benedicta married Sir George Stanley.  The church was consecrated in 1523.  (Photo credit: heatherpix26, on Flickr.)


On the 27th of February, the marriage of General Sir George Stanley and Benedicta, Dowager Countess Melton, was celebrated at the church of St. Margaret’s, the parish church of Westminster Abbey.

It was not a large wedding, but one done in the best of taste, as Horace Walpole, one of the guests, remarked approvingly. Olivia had had the church decorated simply with evergreen boughs, done up in ribbons of gold tissue, and the scent of pine and cedar lent a welcome freshness to the atmosphere of ancient wax and bodies kept too long enclosed. Composed in equal parts of military dignitaries, politicals, and social ornaments, the congregation shone nearly as brightly as the four hundred candles, a-glimmer with gold lace and diamonds.

(From LORD JOHN AND THE BROTHERHOOD OF THE BLADE by Diana Gabaldon, chapter 17, "In Which a Marriage Takes Place, Among Other Things". Copyright© 2007 by Diana Gabaldon. All rights reserved.)

I have no idea if there really is a small alcove behind the organ, suitable for an emergency childbirth <g>, or whether that's something Diana invented for the story.

[EDIT to add:  Diana Gabaldon answered this question on Compuserve as follows: "Actually, Olivia gives birth at the foot of the stairs to the organ loft.  I have no idea what these look like, but if the church _has_ an organ loft (and I'm sure it does), there are certainly stairs leading up to it."] 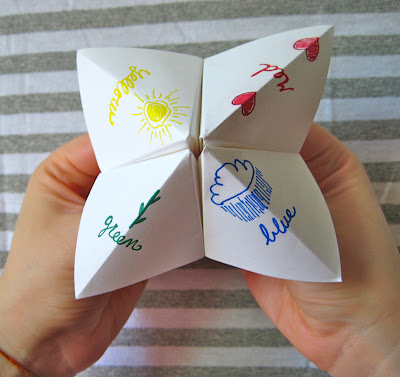 2) Remember the scene in AN ECHO IN THE BONE where Brianna takes the photocopy of the newspaper clipping and folds it into a fortune-teller?  I had to laugh at that, because I remember these very well from elementary school.

“Oh.” She picked it up and made the last few folds, quick and sure, then held it out on the palm of her hand. He frowned at it for a moment, then realized what it was. A Chinese fortune-teller, kids called them; there were four pockets showing, and you put your fingers in them and could open the thing in different combinations as questions were asked, so as to show the different answers--Yes, No, Sometimes, Always--written on the flaps inside.

Here's a video showing step-by-step instructions on how to make a paper "fortune-teller" (also known as a "cootie-catcher").  You can download printable fortune-teller templates, if you don't want to draw your own.  Look here, for example.

The method this kid demonstrates in the video is exactly how I used to make them, back in the fourth grade. <g>

3) This is an example of a urethral syringe, from the Mary Rose, Henry VIII's flagship.  Click on the photo for a bigger view.  I think the one Dr. Fentiman had would have been similar.


"Ye do what with it?” Jamie had flinched slightly during my recounting of the tale of Stephen Bonnet’s testicle. When I reached a description of the penis syringes, he crossed his legs involuntarily.

“Well, you work the needlelike bit down in, of course, and then flush a solution of something like mercuric chloride through the urethra, I suppose.”

“No.” He leaned forward and planted his elbows firmly on his knees. “D’ye suppose it burns much?”

“I can’t think it’s at all pleasant.”

“I don’t think it’s really effective, either,” I added thoughtfully. “Pity to go through something like that, and not be cured. Don’t you think?"

I love that scene, although the thought of it makes me shudder a bit, too! 4) This photo shows a herd of wild horses near Corolla, on the Outer Banks of North Carolina.  (Photo credit: Robert Och Photography on Flickr. They're known as Banker horses, and they've lived on the Outer Banks since the 16th century.  Brianna saw them when she was being held captive in Stephen Bonnet's lair in A BREATH OF SNOW AND ASHES:


A familiar sound came to her, and she craned her neck to see. Not much was visible from the window--only the white crushed shells and sandy mud that surrounded the house, and the tops of stunted pines. If she pressed her face to the side of the window, though, she could see a small slice of a distant beach, with white breakers rolling in. As she watched, three horses galloped across it, vanishing out of her view--but with the wind-borne sound of neighing, then came five more, and then another group of seven or eight. Wild horses, the descendants of Spanish ponies left here a century ago. You can still see their descendants today on Ocracoke Island, like the one shown above.  (Photo credit: slazebni on Flickr.)  Unfortunately, the horses on Ocracoke these days no longer roam freely.  According to Wikipedia,


Since 1959, Bankers on Ocracoke Island have been confined to fenced areas of approximately 180 acres....The areas protect the horses from the traffic of North Carolina Highway 12, as well as safeguarding the island from overgrazing.

Have any of you seen them? 5) This bizarre-looking fungus is called a chaga (Inonotus obliquus).  I had never heard of it before I read THE FIERY CROSS:


Trade was brisk, and by the evening, I had exchanged my stocks for quantities of wild ginseng, cohosh, and--a real rarity--a chaga. This item, a huge warty fungus that grows from ancient birch trees, had a reputation--or so I was told--for the cure of cancer, tuberculosis, and ulcers. A useful item for any physician to have on hand, I thought.

For more information about chaga, look here and here.

Good morning Karen and thankyou so much for today's FFF ! Just like last week, you remind me of my childhood (plastic pop-it beads)with the paper "fortune-teller"!! I remember that too so well, making them at school..Haven't thought of that in years ! I love the "banker horses", magnificent animals.Too bad they can't live in the wild any more but I understand it's to protect them.Best greetings, Christiane

Good morning, Karen. And thank you, once again, for a stellar FFF! Have a wonderful weekend!

Christiane - my sister and I used to make those paper fortune-tellers quite often when we were kids. It brought back memories for me, too!

Lisa - thanks! Glad you liked the FFF!

Thank you for another FFF!

On an unrelated note, it wasn't until I read your timeline that I realized that Claire traveled on Jamie's birthday.