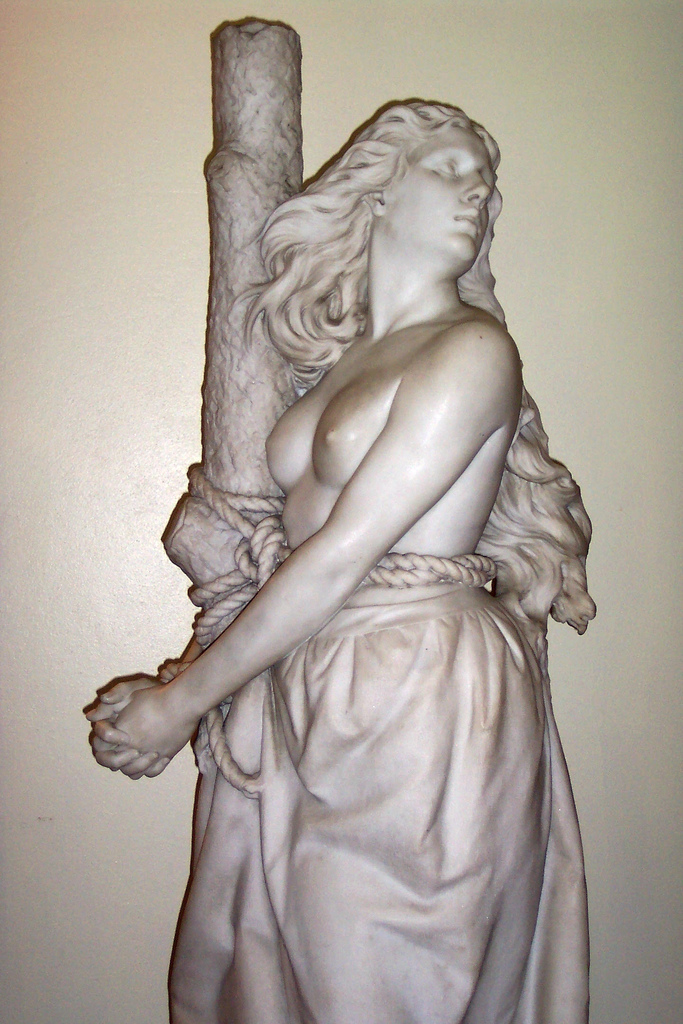 1) You may remember Duncan Innes telling Roger this story in A BREATH OF SNOW AND ASHES:


"Margaret,” he said. “Her name was Margaret. Eighteen she was, at the time.....[They] dragged her doon to the shore, her and an auld Covenanter woman from the village, stripped them, and tied them both to stakes at the tide line. Waited there, the crowd o’ them, for the water to come in.”

He took another swallow, not waiting for the taste of it.

“The auld woman went under first; they’d tied her closer to the water--I suppose thinking Margaret would give in, if she saw the auld woman die.” He grunted, shaking his head. “But nay, not a bit of it. The tide rose, and the waves came up ower her. She choked, and she coughed, and her hair loose, hanging over her face, plastered doon like kelp, when the water went out.

“My mither saw it,” he explained, lifting his glass. “She was but seven at the time, but she never forgot."

What Duncan is describing is a real historical incident.  The statue shown above, from Knox College in Toronto, Canada, depicts Margaret Wilson, the younger of the two women executed by drowning on the Solway Firth in 1685.  Click on the photo for a bigger view.


On 11th May 1685....Margaret Wilson and Margaret McLachlan were chained to stakes on the Solway Firth. At the last moment, choking on the salt water, Margaret Wilson was allowed to offer a prayer for the King, which she did, but she continued to refuse to abjure the covenant. This was not good enough for her accusers, and she was forcibly thrust beneath the waves. It is said that, as the tide rose, she defiantly quoted from the psalms and the epistles and sang until she drowned.

These women became known as the Solway Martyrs.  For more information, look here. 2) The photo above shows Salmonella typhi, the bacteria that causes typhoid fever.


That seaman didn’t have the characteristic belly rash, nor the next, but the third one did. The light red rosettes were plain on the clammy white skin. I pressed firmly on one, and it disappeared, blinking back into existence a moment later, as the blood returned to the skin. I squeezed my way between the hammocks, the heavy, sweating bodies pressing in on me from either side, and made my way back to the companionway where Captain Leonard and two more of his midshipmen waited for me.

“It’s typhoid,” I told the Captain. I was as sure as I could be, lacking a microscope and blood culture.

Here is a list of symptoms of typhoid fever.  What a horrifying disease!  I think it's amazing that Claire was able to save as many lives as she did, working under such primitive conditions aboard the Porpoise.

Typhoid can only spread in environments where human feces or urine are able to come into contact with food or drinking water.  Improved sanitation and the development of a typhoid vaccine have greatly reduced the spread of this disease in modern times, but it remains a serious worldwide threat, especially in the developing world, affecting an estimated 22 million people each year, according to the Centers for Disease Control and Prevention. The disease is endemic in India, Southeast Asia, Africa, South America and many other areas.

3) This photo from Wikipedia shows what a girdled tree looks like. You can see why Roger didn't like doing this job.


"Sorry,” he murmured under his breath to the tree he had selected. It was ridiculous to feel pity for a tree; the more so in this sprawling wilderness, where saplings sprang out of the thawing earth with such spring vigor as to crack solid rock and the mountains were so thickly blanketed with trees that the air itself was a smoky blue with their exhalations. For that matter, the emotion wouldn’t last longer than it took to begin the job; by the time he reached the third tree, he would be sweating freely and cursing the awkwardness of the work.

Still, he always approached the job with a faint reluctance, disliking the manner of it more than the result. Chopping down a tree for timber was straight-forward; girdling it seemed somehow mean-spirited, if practical, leaving the tree to die slowly, unable to bring water from its roots above the ring of bare, exposed wood.

Girdling is used in the same manner today, to kill unwanted trees, but you may be surprised to learn that a similar technique is also used to encourage trees to produce more fruit.  Here's an article about the benefits of girdling peach trees. 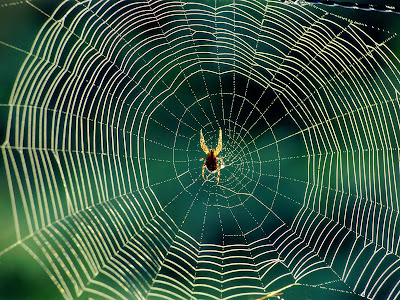 4) The photo above shows an orb weaver spider spinning its web.  Click on the photo to enlarge it.


The orb weaver was advancing cautiously toward the center of her web again.

“See where she walks?” Jamie pointed to the web, anchored by a number of spokes, supporting the intricate netlike whorl. “The spokes there, those are spun of the dry silk, so the spider can walk over it herself wi’ no trouble. But the rest o’ the web is the sticky kind of silk--or mostly so--and if ye watch a spider careful for quite a long time, you’ll see that she goes only on the dry strands, for if she walked on the sticky stuff, she’d be stuck herself.”

“Is that so?” Ian breathed reverently on the web, watching intently as the spider moved away along her nonskid road to safety.

“I suppose there’s a moral there for web weavers,” Jamie observed to me, sotto voce. “Be sure ye know which of your strands are sticky.”

“I suppose it helps even more if you have the kind of luck that will conjure up a handy spider when you need one,” I said dryly.

Here's a video showing how the spider spins its web.

How do spiders avoid getting stuck in their own webs?  Look here.

5) Here's an example of a pie safe from Colonial North Carolina.  Click on the photo for a bigger view.  I like to think it might have been similar to the one Jamie and Claire had in their house on Fraser's Ridge.


"No!” I said, my voice sounding rather louder than I intended. “I’m not...damaged.”

He said something in Gaelic under his breath, short and explosive, and shoved himself away from the table. His stool fell over with a loud crash, and he kicked it. Then he kicked it again, and again, and stamped on it with such violence that bits of wood flew across the kitchen and struck the pie safe with little pinging sounds.

According to this site, the purpose of a pie safe is to keep mice and flies away from baked goods, while still providing enough ventilation (through the tiny holes in the pierced-tin panels) so that the food doesn't spoil.

The photo above shows a pie safe from the 1820s, made of walnut.

The panels on these pie safes were often beautifully decorated, as you can see from this example.

From web-weaving to beautiful carpentry!!! Thanks, Karen, for showing us how both humans and animals create beauty.
Wish I had a pie safe in my house..

I just realized how perfect it is/was for Claire to be using moldy food for her penicillin. Living outside of Boone, NC on top of one of the ridges, we get LOTS of rain in Spring/Early summer. I was looking at the pie safe and thought - might be away from the mice, but not the mold! And bam, it hit me. Claire loves mold.

Thanks for all the wonderful pieces you do, Karen. They're a joy to read each week along with the quotes from Diana's stories.

Last year, my husband girdled a tree in our yard accidentally-- with a weed whacker--, and, of course, I thought of the Outlander series! And yup, the tree died.

I always enjoy your fun facts!

One of my favorite paintings is The Martyr of the Solway by Sir John Everett Millais:

I confess, however, that I never knew the story of the martyr of Solway until reading this. Thanks for sharing it with us.