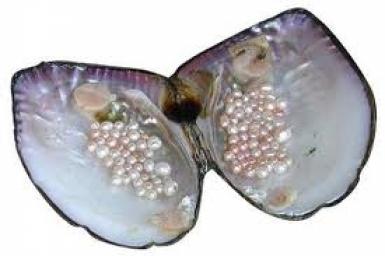 1) This photo shows a freshwater pearl mussel (scientific name Margaritifera margaritifera). This is the type of mussel that produced the pearls in Claire's necklace:


Ignoring Dougal’s fuming, [Jamie] drew a short string of white beads from his sporran. He stepped forward and fastened the necklace around my neck. Looking down, I could see it was a string of small baroque pearls, those irregularly shaped productions of freshwater mussels, interspersed with tiny pierced-work gold roundels. Smaller pearls dangled from the gold beads.

“They’re only Scotch pearls,” he said, apologetically, “but they look bonny on you.”

I was surprised and saddened to learn that these freshwater mussels are critically endangered.  From Wikipedia:


More than half the world's [remaining] population exists in Scotland with populations in more than 50 rivers, mainly in the Highlands, although illegal harvesting has seriously affected their survival. 75% of sites surveyed in 2010 had suffered "significant and lasting criminal damage" and in response the police and Scottish Natural Heritage have launched a campaign to protect the species.

Fishing for these freshwater pearl mussels has been illegal in the UK since 1998, but the species is still very much endangered.  For more information, look here and here.  There's also an interesting short video on the BBC website here.

2) This is an ether mask, manufactured in Edinburgh circa 1900. (Photo credit: Hunterian Museum.)  According to this site:


Ether is applied from a drop bottle to an open mask covered with multilayered gauze. During induction 12 drops/minute are applied for 2 minutes, then 1 drop/second until the patient loses consciousness (usually within 5 minutes). The rate is subsequently adjusted to provide the required depth of anaesthesia. Deep levels of surgical anaesthesia cannot be achieved with this technique in less than 20-30 minutes. Here's another example of an ether mask, from the Museum of Healthcare in Kingston, Ontario, Canada. According to the description:


The anaesthetic mask pictured here, designed by Dr. Sydney Yankauer (1872-1932) – an American laryngologist and prolific inventor of medical equipment – became a standard medical tool after it was introduced around 1904. Its chrome-plated wire frame supports a tear-shaped mesh form. Gauze was draped over the frame and held in place using a spring. Ether would have been dropped onto the gauze by a trained health care provider in order to achieve the desired level of anaesthesia.

Claire obviously had this type of ether mask in mind when she designed her homemade version:


Brianna, clever with her hands, had made the mask to my specifications, woven of oak splits. It was simple enough, a sort of double cage, hinged so that the two halves of it swung apart for the insertion of a thick layer of cotton wool between them, and then back together, the whole thing shaped to fit like a catcher’s mask over the patient’s nose and mouth.

“Put enough ether on to dampen the cotton wool all through,” I instructed Malva. “We’ll want it to take effect quickly.”

“Aye, ma’am. Oh, it does smell queer, doesn’t it?” She sniffed cautiously, face turned half away as she dripped ether onto the mask.

“Yes. Do be careful not to breathe too much of it yourself,” I said. “We don’t want you falling over in the midst of an operation.” 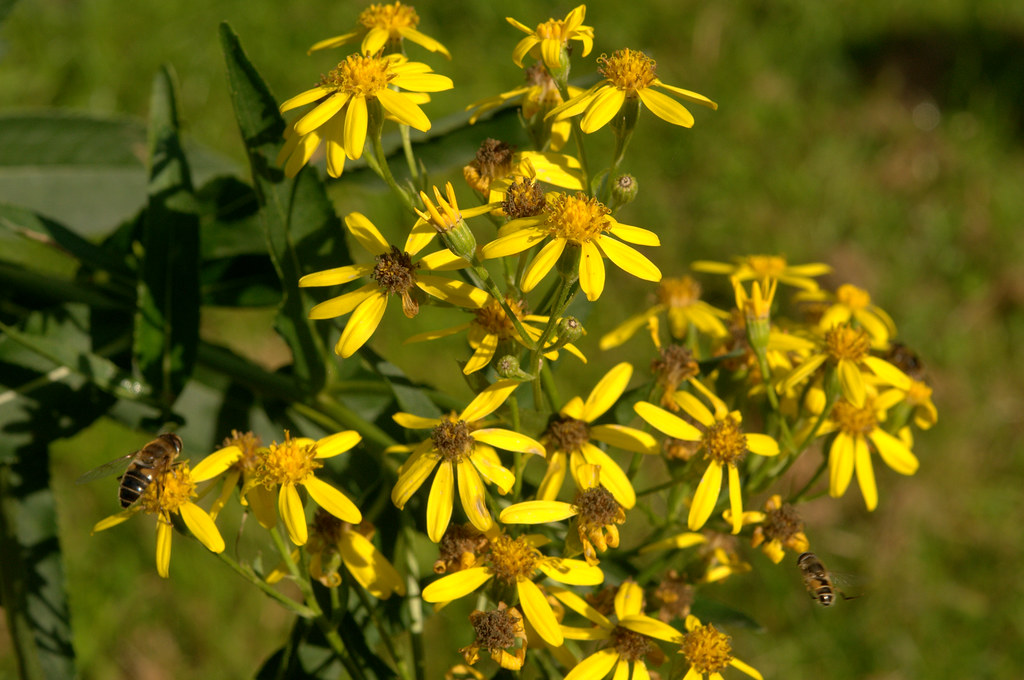 3) This is Saracen's consound (broad-leaved ragwort), also known as Senecio saracensis or Senecio fluviatilis. (Photo credit: Cladoniophile, on Flickr.)  You may recall that Master Raymond advised Claire to treat Mary Hawkins with it, following her rape in DRAGONFLY IN AMBER:


[Master Raymond] laid out a gauze square on the counter and poured a handful of finely shredded dried leaves into the center of it. A sharp, pleasant tang rose from the small heap of grayish-green vegetation.

“This is Saracen’s consound,” he said, skilfully folding the gauze into a tidy square with the ends tucked in. “Good for soothing irritated skin, minor lacerations, and sores of the privy parts. Useful, I think?"

"Yes, indeed,” I said, a little grimly. “As an infusion or a decoction?”

“Infusion. Warm, probably, under the circumstances."

According to Culpeper's Complete Herbal, published in 1814:


Being boiled in wine, and drank, it helps the indisposition of the liver, and freeth the gall from obstructions; whereby it is good for the yellow jaundice and for the dropsy in the beginning of it, for all inward ulcers of the reins, mouth or throat, and inward wounds and bruises, likewise for such sores as happen in the privy parts of men and women; being steeped in wine, and then distilled, the water thereof drank, is singularly good to ease all gnawings in the stomach, or other pains of the body, as also the pains of the mother: and being boiled in water, it helps continual agues; and the said water, or the simple water of the herb distilled, or the juice or decoction, are very effectual to heal any green wound, or old sore or ulcer whatsoever, cleansing them from corruption, and quickly healing them up.

In modern times, ragwort is known mainly as a weed that is poisonous to grazing animals such as cattle and horses.

4) This photo shows an RAF Spitfire PR XIX of the type used during World War II for photo reconnaissance, just as we saw in "A Leaf on the Wind of All Hallows".


"Get as close as you can manage with a chance of coming back, all right? The cameras may be worth even more than you are."

That got a faint chuckle from Malan. Pilots--especially trained pilots--were valuable. The RAF had plenty of planes now, but nowhere near enough pilots to fly them.

He’d be taught to use the wing cameras and to unload the film safely. If he was shot down but was still alive and the plane didn’t burn, he was to get the film out and try to get it back over the border.

This photo shows an RAF photographer fitting two F24 8" focal-length cameras into a blister under a wing of a Mk IC Photo-Reconnaissance Spitfire, circa 1939-1940.

Here's a very interesting documentary, 3D Spies of WWII, that aired in 2012 on the PBS series "Nova".  The program goes into great detail about the Spitfire pilots, their role in aerial photo-reconnaissance, how the millions of photos they took were analyzed and interpreted, and how the information contained in those photos helped the Allies defeat the Nazis in WWII.  Fascinating stuff! I think Jerry MacKenzie would be very proud to know that his fellow Spitfire photo-reconnaissance pilots played such an important part in helping to defeat the Nazis.  And I'm sure Jerry would have been right there with them, had fate and a stone circle not intervened. <g> The full-length video is almost an hour long, but it's well worth watching. 5) Hieronymus Bosch (1450-1516) was a Dutch painter whose most famous work (pictured above) is a triptych called "The Garden of Earthly Delights".


I would as soon not have five or ten extra people in my house for the winter, either, but I wasn’t sure it could be avoided.

The Governor’s letter had been quite specific; all able-bodied men in the backcountry were to be mustered as militia troops and to report to Salisbury by mid-December.

That left very little time for house-building. Still, I hoped Jamie had some plan for relieving the congestion; Adso the kitten had taken up semipermanent residence in a cupboard in my surgery, and the scene in the kitchen was quickly assuming its usual daily resemblance to one of the paintings of Hieronymus Bosch.

At least the kitchen had lost its early morning chill with so many bodies crowded into it, and was now comfortably warm and noisy.

Claire has a tendency toward hyperbole. <g> Still, looking at this set of paintings, crammed full of people, you can definitely get a sense of what she means!

Look here to see a much bigger view of the "Garden of Earthly Delights". It's a remarkably intricate and detailed work of art, full of fantastical images of people, birds, and animals.  For a detailed analysis, including close-up views, look here.

I work at the hospital in Kingston where your ether mask picture came from. Kinda cool to see you mention it. Thanks for all of your Friday Facts. I look forward to them every week. :)

Excellent articles, as always! thank you so much Karen.

I really enjoy your Friday facts. Just want you to know I appreciate you! I saw all the ether mask on the movie Cinder House Rules.

Thanks for my Friday facts during my lunchtime at work.