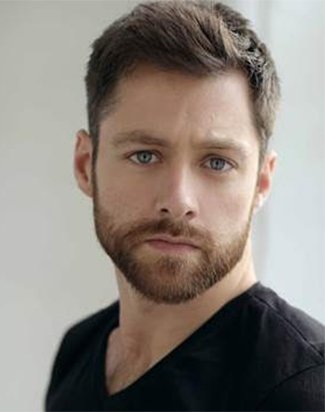 Happy Birthday to Richard Rankin, the Scottish actor who was recently cast as Roger Wakefield in the OUTLANDER TV series! Richard turns 33 years old today, January 4th. In honor of his birthday, and in tribute to one of my favorite OUTLANDER characters, I decided to post these "ABC's of Roger".

I borrowed this idea from a writer's exercise that was posted on Compuserve a few years ago. The idea is to list one word pertaining to the character for each letter of the alphabet, along with a brief explanation. Here's my alphabet for Roger.

If you haven't read all of Diana Gabaldon's OUTLANDER books, there are Major Spoilers below! Read at your own risk.

A for Roger's beloved daughter, Amanda, also known as Mandy.

B for Brianna, of course. Also Bodhran, the ancient Celtic drum that Roger plays on occasion.

C for his Calm demeanor, especially in contrast to Bree's fiery temper. "It isn’t freaking true!” “No, of course not.” Roger watched his wife warily; she was exhibiting the general symptoms of a large explosive device with an unstable timing mechanism, and he had the distinct feeling that it was dangerous to be in her vicinity. (ABOSAA chapter 81, "Benefit of the Doubt")

D for Determination. Roger's determination to overcome whatever obstacles life throws in his way has been a part of his character since he was a small boy. He wouldn’t throw a fit--he hardly ever did--but he wouldn’t give up, either. ("A Leaf on the Wind of All Hallows")

E for Eyesight. Roger lacks binocular vision, which makes it difficult for him to learn to shoot with a musket.

F for Family and Father. "I swear to ye, Bree,” he said. “Whatever I’m called to now--and God knows what that is--I was called to be your husband first. Your husband and the father of your bairns above all things--and that I always shall be. Whatever I may do, it will not ever be at the price of my family, I promise you." (ABOSAA, chapter 52, "M-I-C-")

G for the Gloriana, the ship on which Roger traveled to America in DRUMS OF AUTUMN.

H for the Hanging in FIERY CROSS, which took Roger's singing voice and changed his life forever. Also for Historian. If it weren't for Roger's skill at historical research, Claire might never have been reunited with Jamie, and everything that followed might never have happened.

I for Inverness, where Roger grew up.  Also for the feelings of Insecurity and Inferiority that Roger had for a long time after he came to live on Fraser's Ridge, constantly comparing himself to Jamie. I hope he's finally moved beyond that stage.

J for the two Jeremiah MacKenzies: Roger's father Jerry and his son Jem.

K for Kyle of Lochalsh, Scotland, where Roger was born.

L for Learning the skills he would need to survive in the 18th century, from sword-fighting to girdling trees to butchering a hog. It's not always easy!

M for Morag, wife of William Buccleigh MacKenzie, and Roger's direct ancestor. Roger saved her baby's life on the Gloriana in DRUMS, but his impulsive decision to kiss her in FIERY CROSS was a mistake with devastating consequences.

N for Nicknames. Jamie addressed him impartially as 'Wee Roger,' 'Roger Mac,' or 'MacKenzie' -- more rarely, by the Gaelic nickname Ronnie Sinclair had given Roger, a Smeòraich, in honor of his voice. Singing Thrush, it meant. (FIERY CROSS, chapter 13, "Beans and Barbecue")

O for Oxford University, where Roger studied and later worked as a history professor.

P for Presbyterian and Predestination. Roger's religious faith is very important to him. I was fascinated by his discussions with Jamie about predestination and whether the future can be changed.

Q for Quick-Witted. Roger is a quick thinker in times of crisis. One of my favorite examples is the scene in ABOSAA where the boys put baby Henri-Christian in the creek, and Roger manages to rescue him and stop the miscreants before they get away. "I baptize thee, Henri-Christian,” Roger had bellowed, in his hoarse, cracked voice. “In the name of the Father, and the Son, and the Holy Ghost! D’ye hear me, wee bastards? His name is Christian! He belongs to the Lord! Trouble him again, ye lot of scabs, and Satan will pop up and drag ye straight down screaming--TO HELL!” (ABOSAA chapter 64, "I am the Resurrection, Part 2")

R for the Reverend Reginald Wakefield, Roger's late adoptive father. The Reverend had a major influence on his life.

S for Singing. Roger had such a beautiful singing voice, and the loss of it breaks my heart. It's so difficult now to read lines like this: "I always sing for you, hen." He came behind her, drew her back against him, so that her head rested on his shoulder, her hair cool and live against his face....."No matter what," he whispered, "no matter where. No matter whether you’re there to hear or not--I’ll always sing for you." (FIERY CROSS chapter 16, "On the Night That Our Wedding is On Us")

T for Time-Travel. Not just for Roger's ability to travel through the stones, but also for his "Hitchhiker's Guide" in ECHO, the notebook where he wrote down everything they knew about how the time-traveling works.

U for Uxorious. According to Diana Gabaldon, this word refers to "a man who was clearly and obviously in love with his wife". Roger once called Jamie "deeply uxorious", but I think the word applies equally well to Roger himself.

V for Vrooms. The little wooden cars that Roger carved for Jemmy and the other children on the Ridge were a big success!

W for Wakefield. Roger's mother's surname, and the name by which Brianna and Claire first knew him.

X for the X-shaped cut he made on Jamie's leg to draw out the rattlesnake's venom, saving Jamie's life.

Y for "Yesterday". Roger played this Beatles song on his guitar for Brianna on their wedding night. The lyrics are very appropriate!

Z for Zero. The number of times that Roger has traveled through the stones without the use of gemstones for protection.

Finally, for those of you who don't know, today is also Graham McTavish's birthday. If you're on Twitter, please join us in tagging your tweets with #HappyBdayRichard or #HappyBdayGraham. If you want to send birthday wishes directly to them, their Twitter ids are @RikRankin and @GrahamMcTavish.
#HappyBdayRichard abc's of roger diana gabaldon outlander outlander starz tv series richard rankin roger mackenzie roger wakefield

These are wonderful! Roger certainly is "a man of letters"--as are you, Karen! Thank you!

Karen..."A" stands for "amazing." I liked your amazing alphabet of Roger. Then, I went on to read the ABCs of Outlander, Jamie, and Claire.I am enjoying reading the interesting offerings here, and I am grateful that you have directed me to CompuServe. I am reading so many wonderful comments about the books and the show. I was late to this party because I did not start reading the books until after the show began and my friend bought the books. Currently, I have been reading discussions about Laoghaire. I shake my head in agreement with comments that Vicki makes about that cheeky lass. Teehee.

karen, as always, i so appreciate and enjoy your posts! in this a-b-c about roger i especially enjoyed "q"; it's fascinating to see the switch to feeling-generated energy in typically quiet individuals like roger! have a happy and healthy new year!

Incredible, Karen! I love your blog.

This reminds me that I don't get over here often enough! What a lovely list. As a big fan of Ric's it's easy now for me to see and hear him in this role--unlike Sam and Cait who were new to me.

Love your alphabet! I would add N is for nicknames Regor and Eigger, the backward names for Roger and the Reverend and their horror movie identities. Can't remember the book for sure, most likely Fiery Cross.