My trip to Scotland (Part 1)

We left Edinburgh about noon, heading for Inverness in our rented Volvo.

I don't have photos for this first afternoon; I was too exhausted after the ordeal of getting to Scotland to think much about taking pictures, but I will try to supplement with some general impressions.

My brother did all the driving on this trip. It's not easy driving on the left side of the road! Roundabouts, especially, are very tricky, but he did a great job. We were very glad that our car had a good GPS. We depended on it throughout the whole trip! 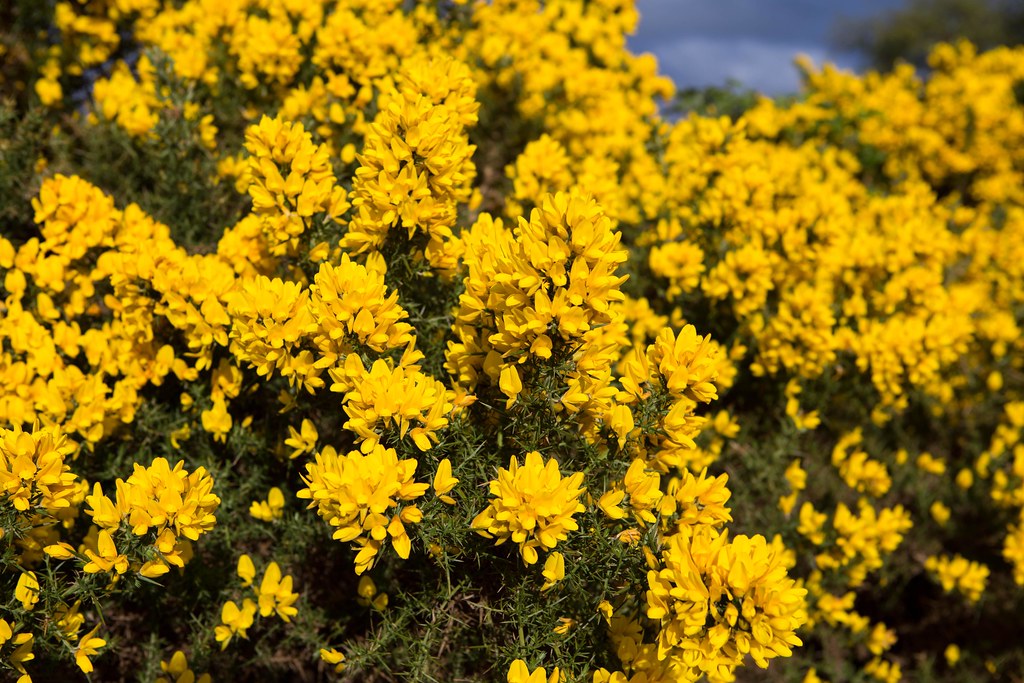 The gorse was in bloom, and we saw a lot of it along the highways as we traveled around Scotland, but I didn't actually get a close-up look at it during this trip. (Photo credit: VFR_Rider on Flickr.) 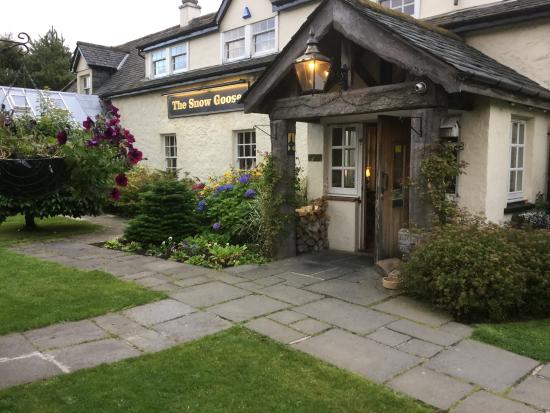 We arrived in Inverness after a five-hour drive.  Our hotel turned out to be very close to a restaurant called the Snow Goose. (The photo above is from TripAdvisor.) I remembered the name from my previous trip to Scotland in 2012, because our tour group had eaten there. So we went there for dinner. Getting into the place turned out to be a little tricky, but we managed, and had a good time.

This was one of our busiest days on the whole trip. Our plan was to take a boat ride on Loch Ness in the morning, then see Culloden in the afternoon. The morning started out with a bit of an adventure. We had a small problem with the rental car, so my brother Ron stayed behind to deal with it while my sister-in-law Kathy and I took a taxi to the boat dock. 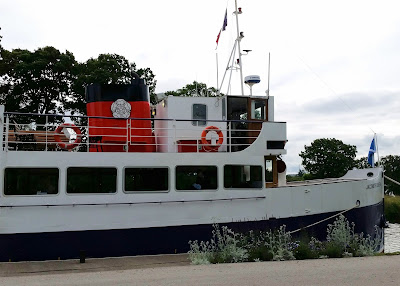 Here's our boat, the Jacobite Queen. 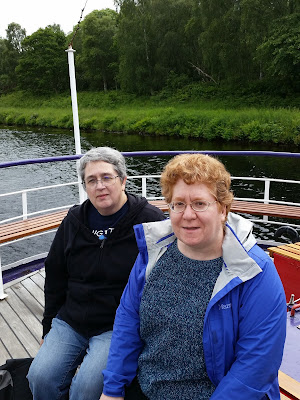 Shortly after we boarded the boat, we got a call from Ron. The issue with the car turned out not to be a big deal, so he was going to try to meet us at the dock. He got a little lost trying to find it, but eventually, with the help of the Jacobite Cruises staff (who really went above and beyond for us!), he was able to rendezvous with us, and we had a very relaxing time on the cruise. 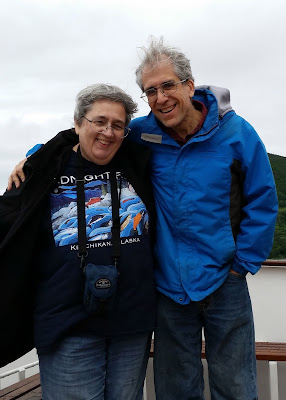 Here's Urquhart Castle. (Click on the photo for a bigger view.) We opted not to visit the castle, because it's not very accessible for someone like me who uses a scooter. 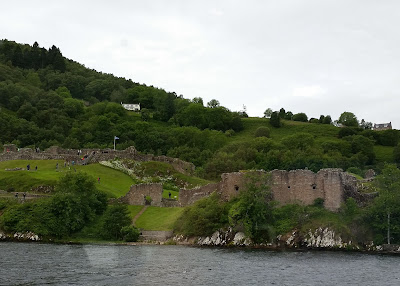 We didn't see Nessie, but we all had a good time on this cruise, and I would certainly recommend Jacobite Cruises to anyone planning to visit Loch Ness! 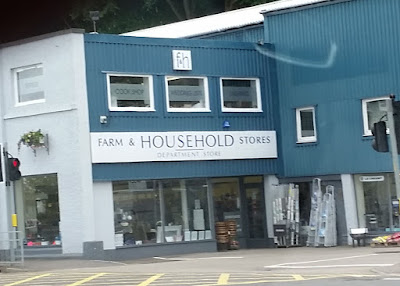 Driving through Inverness on our way back to the hotel, I glanced out the window and happened to catch a glimpse of this Farm & Household Stores building. I recognized the name instantly from the reference in ECHO:


"Christ, I’m late. I’ll stop at the bank whilst I’m in town--need anything from the Farm and Household?”

“Yes,” she said dryly, “a new pump for the milk separator.”

“Right,” he said, and kissing her hastily, went out, one arm already into his jacket.

She opened her mouth to call after him that she’d been joking, but on second thought closed it. The Farm and Household Stores just might have a pump for a milk separator. A large, bewilderingly crowded building on the edge of Inverness, the Farm and Household supplied just about anything a farm might need, including pitchforks, rubber fire buckets, baling wire, and washing machines, as well as crockery, jars for canning, and not a few mysterious implements whose use she could only guess at.

Ron and Kathy both gave me weird looks. "Why on earth do you want a picture of that?" Neither of them has read Diana Gabaldon's books, but they certainly know about my addiction, and they mostly humored me when I spotted OUTLANDER-related things during our trip.

In the afternoon, we visited Culloden. It's a very sobering place, and the Visitors Centre is one of the best museums of its kind that I have ever seen. We were lucky that we had good weather. Here are a few photos I took inside the Visitors Centre: 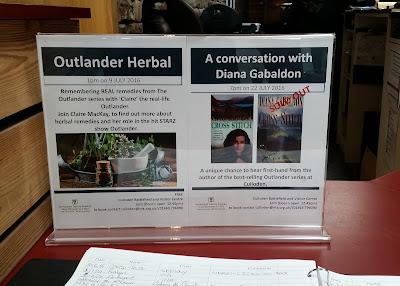 This was prominently displayed at the front entrance, so you couldn't possibly miss it! Diana Gabaldon will be speaking at Culloden on July 22. 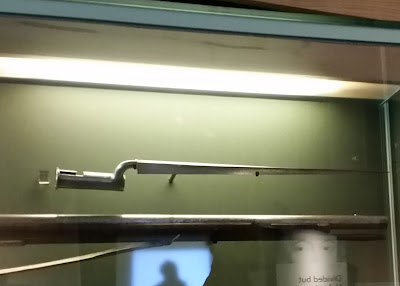 Look at the wickedly sharp blade on that bayonet, and think about how Jamie was wounded at Culloden. 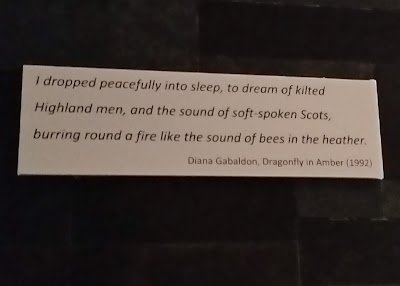 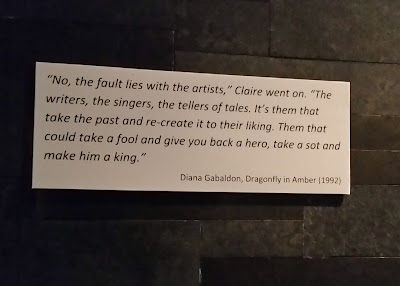 This pair of quotes from DRAGONFLY IN AMBER are on the wall near the end of the exhibits, in a section devoted to references to Culloden in literature, etc. 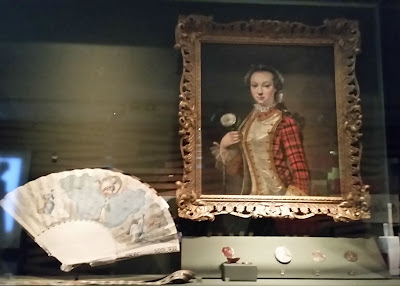 Flora MacDonald, holding a white rose, symbol of the Jacobites. 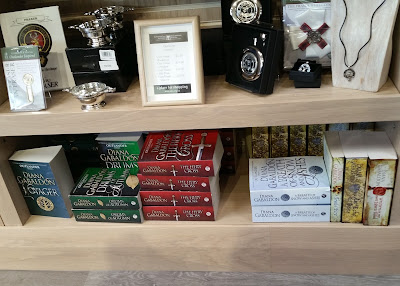 The gift shop at Culloden had a whole floor-to-ceiling display of OUTLANDER-related merchandise, including all eight of the OUTLANDER books. (OUTLANDER and DRAGONFLY are not shown here, but they were on the top shelf of this display.) 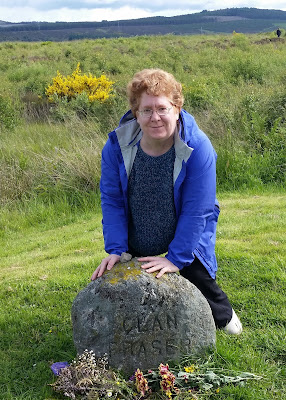 Here I am at the Clan Fraser stone. Aren't the flowers lovely? They were left by previous visitors. 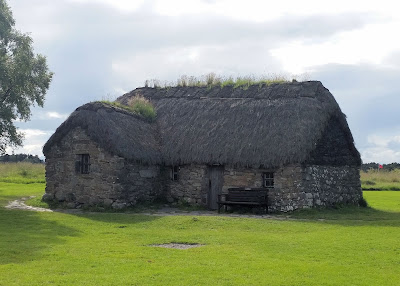 This is Leanach farmhouse, where Jamie escaped execution after the battle. I was very glad to be able to get a close look at it. 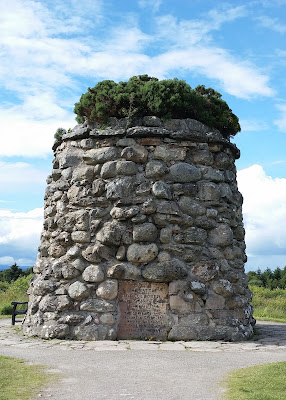 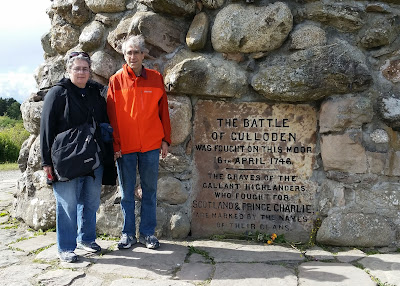 Ron and Kathy at the memorial. 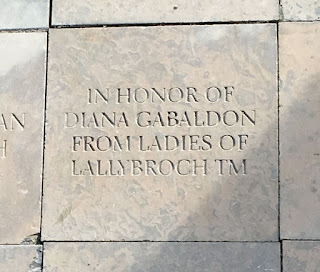 This stone in honor of Diana Gabaldon is on the walkway outside the Visitors Centre.

After dinner, we decided to take a walk along the River Ness. It was a beautiful evening, and very peaceful by the river. A lovely way to cap off a very enjoyable day! 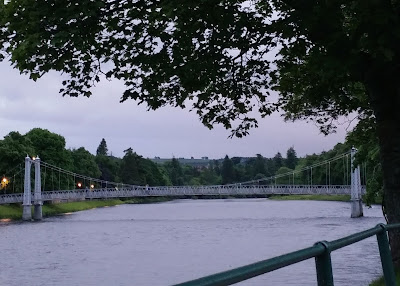 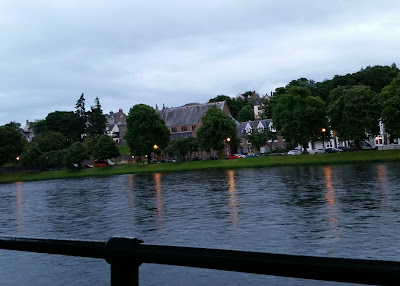 Hi Karen , thanks so much for sharing your lovely trip with us fans , it's like we were there with you , I love Scotland and want to go very much hopefully within the next year or so, Diana Gabaldon and the Outlander series have been featured in Rick Steves recent, travel book on Scotland for 2016, and several Outlander tours, while visiting Inverness , you must have had images of Outlander in your head , please post more soon. hope you had good weather while there . Sincerely Yours. Mary Tormey.

Welcome Home Karen. All pictures are fun to see, but the Leanach farmhouse was wonderful. When I was reading, I had pictured a different style of farm. This will always be my visual now. Thank you for sharing it is truly appreciated.

thanks, Karen. The photos and your narrative were great. Our younger daughter won a grant to study in SCotland while she was in college, and our older daughter joined her there . They both loved the country. Hub is an avid golfer who would live to play golf in SCotland, so we may get there one day. Thank so much for sharing your trip with u.

Hi Karen, looks like you had a wonderful trip! Thank you for sharing with your fans!!! Can't wait to read more:)

Thanks so much for sharing this with us. My ancestry is Irish\English, but if I ever get to the Britain - Culloden is at the top of my list of "must sees". Too bad for my non-Outlander-loving sisters.

Thank you for sharing!

Hi Karen. I ve your photos and commentary. My husband and I are going to Scotland in August, starting in Edinburgh, off to Inverness, and across the Highlands to Glencoe. Your bits about the driving are making me feel a little more confident as this is my greatest concern. Your trip looks like a lovely adventure and one that I can't wait to experience myself.