My trip to Scotland (Part 4)

After breakfast we left Fort William, heading for Edinburgh, and driving on major highways for the first time all week. The scenery as we drove through the Highlands was spectacular. 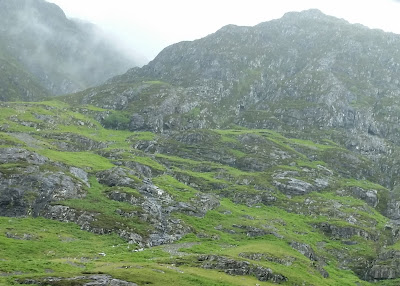 I had really enjoyed my previous visit to Stirling Castle in 2012, so when we were planning our trip, I suggested that we stop there on the way to Edinburgh.  What I didn't realize until we were almost there was that Doune Castle (where they filmed the exterior shots of Castle Leoch for the OUTLANDER TV series) was only a few minutes away from Stirling.

So I persuaded my brother and sister-in-law to take a brief detour to Doune, just to get a good look at the castle from the outside.  We didn't try to go inside, because I had read online that accessibility would be a problem, but we did get some nice photos of the exterior! 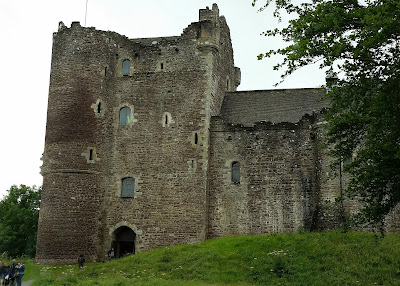 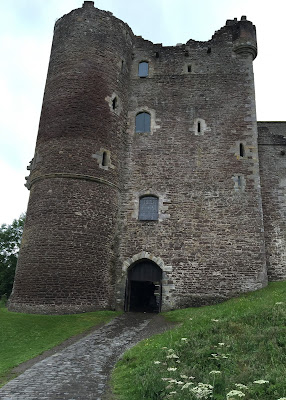 Upon our arrival at Stirling Castle, we took some time to look around outside.  The castle is, of course, situated on the high ground, and the view of the countryside below is just stunning! 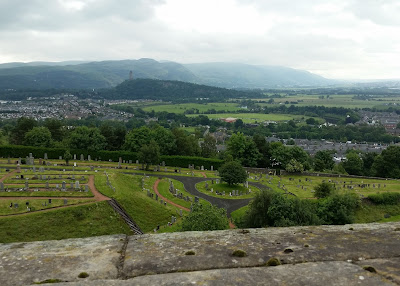 Of course, providing attractive views for the tourists was not the point. <g> The presence of these cannons serves as a reminder that Stirling was built for defense. (Some of you may remember references in DRAGONFLY IN AMBER to the siege of Stirling Castle in January 1746.) 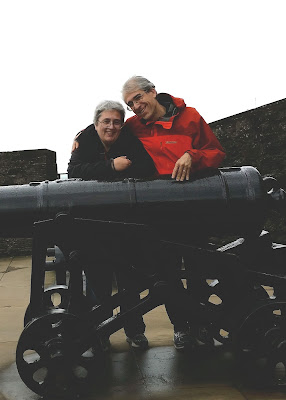 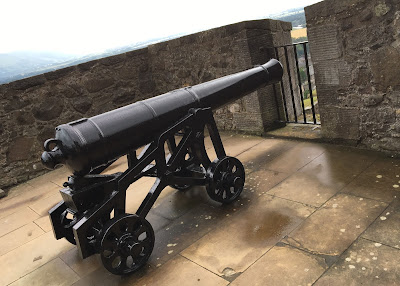 My favorite part of Stirling Castle is the restored palace, with the rooms furnished as they would have appeared in 1546. 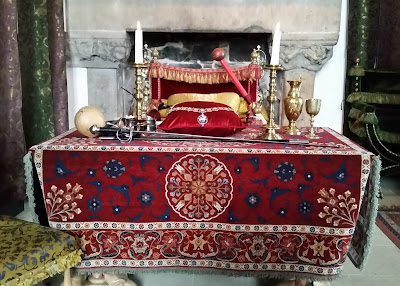 This photo was taken in the queen's bedchamber. There are re-enactors in every room, dressed in period costume, and I was amused by the way they stayed in character no matter what oddball questions people asked them.

I loved seeing the famous tapestries, though my photos really don't do them justice. 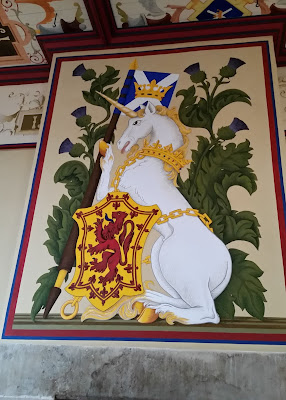 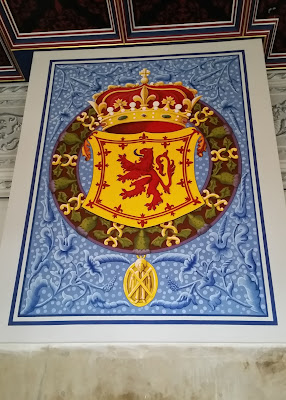 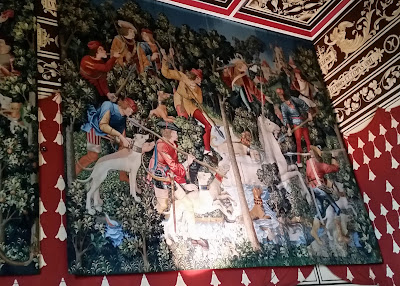 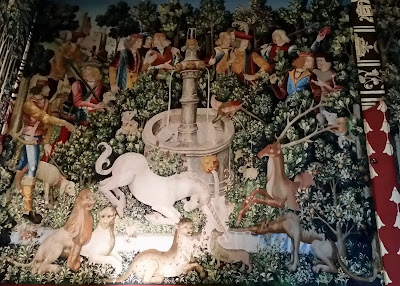 These are modern reproductions of the original 16th-century tapestries, painstakingly hand-crafted by a team of artisans who spent years recreating them.

Here is a video that describes the process of recreating the tapestries. The project was finally completed in 2014, and the results are magnificent! Look here for more information.

If you ever get a chance to visit Stirling Castle, the tapestries are definitely worth seeing in person!

On our way from Stirling to Edinburgh, suddenly my brother said, "What's that?" and pointed toward the side of the highway. That's when I realized, belatedly, that we were passing right by the site of The Kelpies. 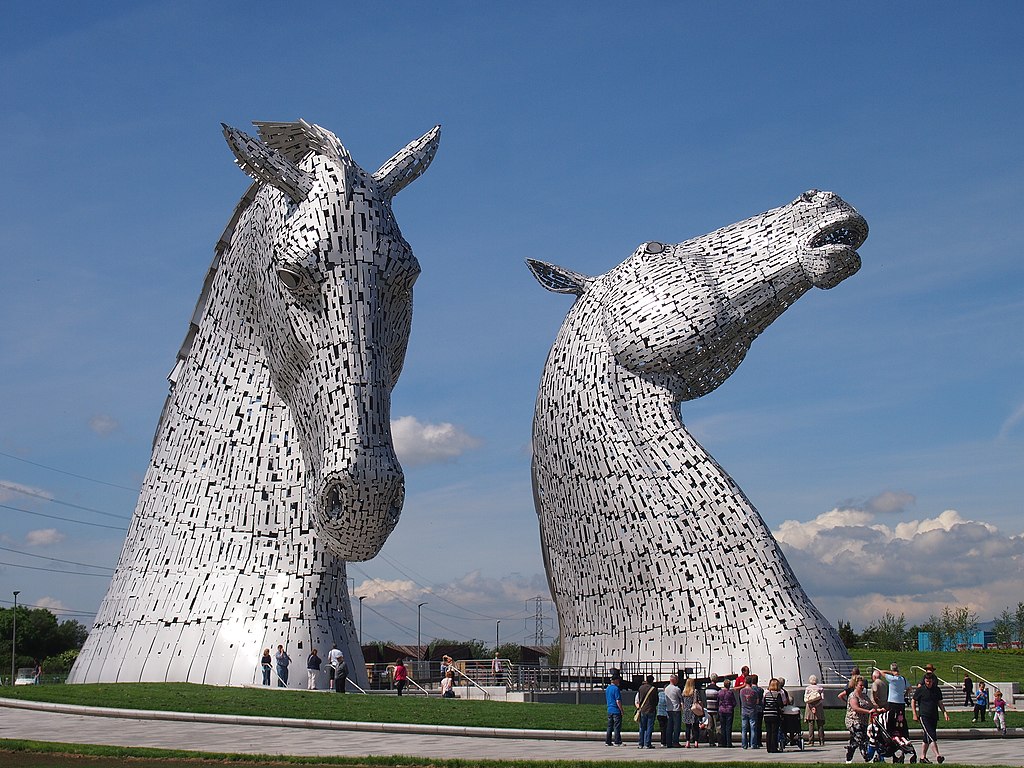 I only got a quick glimpse of them from the road as we passed. We were so close to our destination at that point that we didn't bother to go back and see them up close. (The photo above comes from Wikipedia.)

We checked into the hotel, returned the car, and had a nice dinner at the hotel restaurant and a good night's sleep before getting up early the next morning to go to the airport. 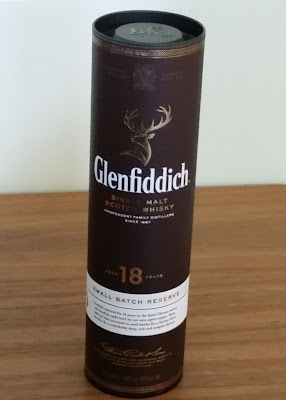 The return trip was pretty uneventful, except that I did run into a little trouble going through airport security in Newark. I had bought a small bottle of whisky in the duty-free shop in the Edinburgh airport. The sales clerk wrapped it in plastic and sealed it, telling me, "Make sure you keep it in this sealed bag and you won't have any trouble going through security."

It wouldn't have been a problem, except that I had to change terminals in Newark for my return flight to Raleigh (that was an adventure in itself, but everything worked out in the end), and so I ended up having to go through security again.  The TSA agents in Newark appeared perplexed, as though they'd never seen anyone fly in from Scotland carrying whisky before. They stared first at me, then at my bag, and started arguing with each other.

"It's in a sealed bag from the duty-free. It's fine."
"But it's more than 3 1/2 ounces of liquid!"
"But it's already been through security on the incoming flight."
"It's liquid. We have to re-check it."

So they opened the sealed plastic bag, opened the container with the little bottle of Glenfiddich in it (I was really wondering if they would insist on opening that, too, to test it, but fortunately they didn't!), looked at it for a minute or two, then put it back in the container, re-packed it in a new plastic bag, re-sealed it, and said, "It's OK, you're fine," and waved me through.

We had a wonderful time in Scotland, and I think all three of us enjoyed getting to see a few areas that were a little less "touristy", and getting a feel for the natural beauty of many parts of the country. Considering that I arrived a full day later than originally planned, I think it's amazing that we were able to do almost everything we intended.

Many, many thanks to my brother and sister-in-law, who were great traveling companions as well as a tremendous help to me personally throughout this whole trip. I couldn't have done it without you!

I hope you've enjoyed this little travelogue, and I would really encourage all of you to visit Scotland at some point if you can.

Here are the previous posts in this series:

Hi Karen , thanks for sharing your exciting vacation with us fans , when I finally get to Scotland myself, I plan on taking one of the Outlander Tours that are so popular , and can see all of the local areas that have been described and used in the book and on the Series, Stirling Castle , looks very beautiful, and love the tapestries. they are very beautiful , hope to get to Scotland myself in the near future. please post more soon. Love Your Blog. Sincerely Yours. Mary Tormey.

Thanks so much for sharing with us. You made the books come alive even MORE!

Thank you, Karen, for sharing your trip. I loved your commentary and the pictures are fantastic. Truly brought Scotland alive.

Thanks for taking the time to share your pictures and experience with everyone!

Thank you, Karen. YOur trip sounds wonderful. I want to go there!! Maybe next summer.