My trip to Scotland (Prologue) 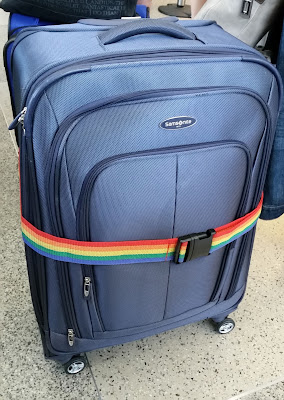 Woke up at 5 am, very excited that The Day was here at last!  Spent an hour and a half doing some month-end reporting for work, then focused on packing. I was just about finished by 10:30 am, for a flight leaving Raleigh at 2:45 pm, when I got an email from United Airlines saying that my flight from RDU to Newark (the first leg of my journey to Scotland) had been cancelled (!)

Massive shot of adrenaline, followed by momentary panic. ("OMG, how will I get to Scotland if my flight to Newark is cancelled?!?")  I called United and they said the only alternative was to re-book on Delta. They attempted to transfer me to a Delta agent, but hung up on me instead. Grrrr! Called United again, repeated the story, this time managed to get booked on a flight leaving RDU at 6:23 pm, connecting in JFK to a flight that would arrive in Edinburgh at 10:50 am the next morning.  OK, I thought. Three hours later than we planned, but no big deal.

(My brother and sister-in-law were already in the UK and planning to meet me in Edinburgh on Saturday morning.)

I arrived at the airport at 4 pm to find massive lines leading to the ticket counter, something I've never seen before in Raleigh. It took the better part of two hours just to get to the head of the line at the ticket counter! It occurred to me later that this must have been because many flights had been cancelled (due to severe weather elsewhere in the country, particularly in the NYC area) and people needed to re-book. By the time I got through the line and made it through security, my 6:23 pm flight had been delayed to 7:32 pm.  Again, no big deal, or so I thought.

Waiting in line at the gate, with 45 minutes to spare before the flight, I called my mom to update her on the situation. While I was speaking to her, I could see that the flight was still scheduled for 7:32 pm, no problem. I hung up, glanced again at the sign over the gate, and blinked in confusion, because it now said 9:07 pm. (!) OK, clearly I'm not going to make an international flight leaving at 10:50 pm from JFK.  So what to do?  The lady standing behind me in line, bless her, gave me some really good advice. She said to call Delta and make a reservation on the same flight to Edinburgh for the next day, just in case.  So I was able to do that, and with the fallback plan in place, I relaxed just a little. Arriving in Scotland on Sunday morning, one day later than planned, wouldn't be so bad; my brother and sister-in-law were already planning to stay in Edinburgh Saturday night, so it wouldn't affect our plans too much.

This was the only alternate plan that had any chance of getting me to Scotland in a reasonable amount of time, since all flights out of Raleigh on Saturday were full. So I grabbed it.

Now, if only I could get myself to JFK! Hours went by, and our flight still wasn't cancelled, just delayed and delayed. At 11:20 pm, the flight I was supposed to be on from JFK to Edinburgh left JFK. I, of course, was still in Raleigh, four miles from my house. Still, it was OK, I had my backup plan.  More time passed. We boarded the plane, waited 30 minutes, then were essentially ordered to get off and wait by the gate instead.  The flight crew seemed determined not to cancel our flight, but they had no idea when we might be able to take off.

Eventually we did, though, landing at JFK about 3 am. <yawn>

Keep in mind by this time I had been up 22 hours straight, and I was facing the prospect of waiting another 19 hours in the airport for my flight out of JFK at 10:50 pm.  Still, I had, finally, made it to NY, I had a safe place to wait, with access to food and electrical outlets to charge my scooter battery and phone. It could have been worse!

About this time, I got an email from my brother, waiting for me in Edinburgh. He reminded me that my sister was due to arrive from Israel that same day (Saturday), flying into JFK about 5 am, in the same terminal where I was. He suggested that I try to meet up with her if possible. So I went down to the baggage claim area, and did in fact meet her as she came out. (Nearly gave the poor woman a heart attack! She didn't have her phone turned on, and had no way of knowing I was even there in JFK, let alone coming to meet her. What a shock! This is going to be one of those family stories we remember forever. <g>)  I was able to spend a few hours with my sister before she got on her flight to Raleigh, which was really nice.

I passed a quiet day on Saturday. Spent a lot of time exploring the terminal during the day (not that there's all that much to see, but I didn't have much else to do), periodically getting "wish you were here" emails from my brother and sister-in-law in Scotland, who were spending the day sightseeing in Edinburgh. Napped a little bit.

At long, long last, I boarded my flight from JFK to Edinburgh at 10:50 pm.

The flight was uneventful, the luggage came through just fine on the other end, and my brother and sister-in-law were there to meet me at the airport, about noon on July 3. At this point I had had roughly 3 hours sleep in the previous 48 hours, but adrenaline and excitement kept me going. After all that stress and worry and waiting, I was finally, finally, in Scotland, only a little more than a day late, and the trip we'd planned was actually going to happen!

Hey....your a trooper. My heart is racing reading your blog. I am traveling to Scotland in September. The flight will be standby. I would love to follow you & learn anything I can from you to make my trip a little easier.
Enjoy
Victoria

Wow! What a start. Can't wait to hear more!

Holy Smokes! Crazy start to your adventures! Hoping for smooth sailing from here on out!

Lord have mercy! Bout had a heart attack just reading what you went through. I'm from NC and fly out of CLT internationally. You literally hold your breath until that last plane takes off. You did a fantastic job holding it together! Look forward to hearing more!