Here are this week's Friday Fun Facts about Diana Gabaldon's books.  This is a collection of some of my favorite items from previous FFF posts.  All of these were originally posted more than a year ago.  Hope you enjoy them!  (In case you missed it, here's the Best of the Friday Fun Facts: Collection #1.)

1) As you can see from the photo above, porcupines' front teeth really are orange, just as Jamie described them in his letter to Jenny in DRUMS OF AUTUMN:


Your son sends his Most Affectionate Regards, and begs to be Remembered to his Father, Brothers and Sisters. He bids you tell Matthew and Henry that he sends them the Encloased Object, which is the preserved Skull of an animal called Porpentine by Reason of its Prodigious Spines (though it is not at all like the small Hedge-creepie which you will know by that name, being much Greater in Size and Dwelling in the Treetops, where it Feasts upon the tender shoots). Tell Matthew and Henry that I do not know why the Teeth are orange. No Doubt the animal finds it Decorative.

The picture above shows a porcupine's skull, like the one Jamie sent to Lallybroch for Henry and Matthew.  Click on the photo for a bigger view.  You can see more porcupine skull pictures here.

Why do they have orange teeth?  According to this site, "Like all other rodents, porcupines have ever-growing incisors. The enamel on the front of the incisors is stained orange by iron salts that also serve to strengthen the tooth."

Why does Jamie refer to the creature as a "porpentine"?  It turns out that "porpentine" is an archaic word for porcupine.  You may recall the reference in Hamlet, Act I, Scene 5:


But that I am forbid
To tell the secrets of my prison-house,
I could a tale unfold whose lightest word
Would harrow up thy soul, freeze thy young blood,
Make thy two eyes, like stars, start from their spheres,
Thy knotted and combined locks to part
And each particular hair to stand on end,
Like quills upon the fretful porpentine.

Bonus trivia question:  There is a reference to a "fretful porpentine" in the OUTLANDER books.  Do you remember who said it, and under what circumstances? 2) The small ivory carving shown above is an example of a Japanese art form called netsuke.  According to Wikipedia:


Traditional Japanese garments—robes called kosode and kimono—had no pockets; however, men who wore them needed a place to store their personal belongings, such as pipes, tobacco, money, seals, or medicines.

Their solution was to place such objects in containers (called sagemono) hung by cords from the robes' sashes (obi)....Whatever the form of the container, the fastener that secured the cord at the top of the sash was a carved, button-like toggle called a netsuke.

These netsuke figurines are very small, just a couple of inches long, which makes the details of the carving and decoration even more impressive.  Just imagine how exotic these little figures would have appeared to Englishmen in the 18th century, like Lord John and his friend Arthur Norrington:


Norrington raised one thin brow and took the package, which he unwrapped with greedy fingers.

“Oh!” he said, with unfeigned delight. He turned the tiny ivory carving over gently in his large, soft hands, bringing it close to his face to see the details, entranced. “Tsuji?”

Grey shrugged, pleased with the effect of his gift. He knew nothing of netsuke himself, but knew a man who dealt in ivory miniatures from China and Japan. He had been surprised at the delicacy and artistry of the tiny thing, which showed a half-clothed woman engaged in a very athletic form of sexual congress with a naked obese gentleman with his hair in a topknot. 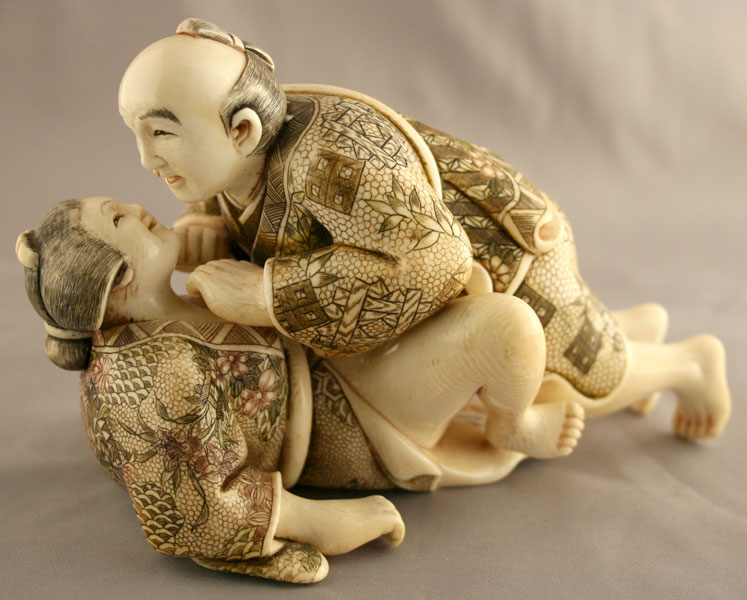 3) Here's an article about the history of trepanation. The engraving above (from Wikipedia) comes from an 18th-century French encyclopedia.  Looking at this picture gives you a new appreciation of what Lord John went through in DRUMS, doesn't it?  No wonder Claire was fascinated. I bet she wished she'd been there to observe the operation. <g>

He shifted uncomfortably under the sheets.

"I am told that he did. I am afraid I was not aware of it at the time."

"Just as well. Would you mind if I look at it? It's only curiosity," she went on, with unaccustomed delicacy. "Not medical necessity. It's only that I've never seen a trepanation."

He closed his eyes, giving up.

"Beyond the state of my bowels, I have no secrets from you, madame."

He tilted his head, indicating the location of the hole in his head, and felt her cool fingers slide under the bandage, lifting the gauze and allowing a breath of air to soothe his hot head.

I was very amused to see that the gentleman in the illustration operates without even rolling up his lace cuffs. <g> Although it appears he's wearing some sort of apron over his suit.

This photo shows a set of surgical instruments designed for trepanation, circa 1760.  (Photo from collectmedicalantiques.com.)

The thing that disturbs me about the trepanation in the story is that it was the habitually-drunk Dr. Fentiman who drilled the hole in Lord John's skull. I mean, yes, he was undoubtedly the only doctor available and all that, but still, having a drunken surgeon approaching your brain with a drill...?? It's probably just as well that John wasn't conscious at the time. <g>

4) Why did apothecary shops always have a stuffed crocodile or alligator hanging from the ceiling? The custom goes back centuries, and is even mentioned in Shakespeare's Romeo and Juliet.  The photo above is from the Deutsches Apothekenmuseum in Heidelberg, Germany, which looks like a very interesting place to visit.  (Click on the photo to see a bigger view.)


A fairly good-sized crocodile, presumably stuffed, hung from the ceiling. I gazed up at the yellow belly-scutes, hard and shiny as pressed wax.

"Real, is it?" I asked, taking a seat at the scarred oak table.

"My crocodile? Oh, to be sure, madonna. Gives the customers confidence." He jerked his head toward the shelf that ran along the wall just above eye height. It was lined with white fired-porcelain jars, each ornamented with gilded curlicues, painted flowers and beasts, and a label, written in elaborate black script. Three of the jars closest to me were labeled in Latin, which I translated with some difficulty--crocodile's blood, and the liver and bile of the same beast, presumably the one swinging sinisterly overhead in the draft from the main shop.

What's the significance of the crocodile?  Check out this video for an explanation.

Many thanks to Alex Boxer, who created this video!  If you want to see more of Alex's videos, check out his website at idolsofthecave.com.

5) This is a hairstyle worn by Marie Antoinette, who became Queen of France in 1774. For a time in the 1770s, it was fashionable for upper-class ladies to wear very, very elaborate hairstyles.  But why sailing ships, of all things?  Here's one explanation:


One of the most fashionable hairstyles of the eighteenth century, À la Belle Poule, commemorated the victory of a French ship over an English ship in 1778. À la Belle Poule featured an enormous pile of curled and powdered hair stretched over a frame affixed to the top of a woman's head. The hair was then decorated with an elegant model of the Belle Poule ship, including sails and flags.

So it makes sense that the hairdresser helping Claire prepare for the Mischianza in May, 1778, would have put her hair up in a style that was all the rage that year among the nobility.  But I'm VERY glad that she roused herself from the fog of grief and depression long enough to refuse to wear such a thing.


John had presented me with the gown this morning, as well as summoning a hairdresser to deal with me from the neck up. I’d shut my eyes, rather shocked at how enjoyable the man’s fingers felt in my hair--but still more shocked when he handed me a looking glass and I saw a towering confection of curls and powder, with a tiny ship perched in it. Full-rigged.

I’d waited ’til he left, then hurriedly brushed it all out and pinned it up as simply as I could. John had given me a look, but said nothing.

If you do a Google image search on "Marie Antoinette ship hair", you'll find many more examples.  The satirists of the day appear to have found these extravagant coiffures highly entertaining.  Take a look at this page, which has a number of illustrations from the period.  I think some of the drawings are hilarious!

Another great blog post. Thanks, Karen! The snip about Claire un-doing her big Antoinette Ship Hair-do, and John giving her a silent look, is such a classic Husband and Wife moment. It gives me chills to recall that Claire and John have their own private relationship history now.

I can't remember which book, but Claire tells Jamie he looks like a "fretful porpentine" after he's mussed up his hair. Prelude to some loving, IIRC. Drums, maybe?

Great collection, Karen. I believe the 'fretful porpentine' reference was in Outlander. Claire uses the phrase to describe Jamie's hair after he jumps out of bed when she yells "Horrocks"...having just remembered that she has not heard the result of Jamie's meeting with the English deserter Horrocks. Thanks again for the FFFs!

I have only recently found your blog & am indulging myself in all the bits & pieces you have lovingly gathered here for the enjoyment & greater appreciation of DG's stories. Your entire site is like a cabinet of wonderment! I couldn'tve found it at a better time- Droughtlander II! I've been wondering how I'm going to survive until 4/2016 too. TY. Am definitely going to return again & again.