"St. Finbar?" Frank had said incredulously. "There isn't such a saint. There can't possibly be."

"There is," I said, with a trace of smugness. "An Irish bishop, from the twelfth century."

There is, in fact, a famous Irish saint by that name, but St. Finbar lived in the 6th century, not the 12th.  (Claire is far from an expert on the lives on the saints, so I think she just misspoke.)  St. Finbar is the patron saint of the city of Cork, Ireland. 2) Snuff is a form of powdered, smokeless tobacco.


Sir Percival paused to remove a snuffbox from his pocket, a pretty thing enameled in green and gold, with cherubs on the lid.

“I really should not advise a trip to the north just now,” he said, opening the box and concentrating on its contents. “Really I should not. The weather is like to be inclement at this season; I am sure it would not suit Mrs. Malcolm.” Smiling at me like an elderly angel, he inhaled a large pinch of snuff and paused, linen handkerchief at the ready.

The enameled snuffbox shown above comes from London, circa 1720. (Photo credit: Bonhams.com)

The painting above shows an 18th-century man taking snuff.  From Wikipedia:


By the 18th century, snuff had become the tobacco product of choice among the elite. Snuff use reached a peak in England during the reign of Queen Anne (1702–14)....Prominent snuff users included Pope Benedict XIII, who repealed the smoking ban set by Pope Urban VIII; King George III's wife Queen Charlotte, referred to as 'Snuffy Charlotte', who had an entire room at Windsor Castle devoted to her snuff stock; and King George IV, who had his own special blends and hoarded a stockpile of snuff.

You can see more photos of 18th-century snuff boxes here.

3) You may recall the scene in BROTHERHOOD OF THE BLADE where Lord John tells Percy about his father's experiences during the South Sea bubble:


Within the previous five years, the price of South Sea shares had risen, from ten pounds to a hundred, then dizzyingly, from a hundred to a thousand within a year, driven up by rumor, greed--and not a little calculated chicanery on the part of the company's directors. The duke sold his shares at this pinnacle.

"And a week--one week--later, the slide began." It had taken most of a year for the full devastation of the great crash to become evident. Several great families had been ruined; many lesser folk all but obliterated. And the public outcry toward those seen to be responsible...

The painting above, by 19th-century artist Edward Matthew Ward, illustrates the frenetic trading activity in London in 1720, at the height of the stock-market craze. (Click on the photo for a bigger view.)  From Wikipedia:


A considerable number of persons were ruined by the share collapse, and the national economy greatly reduced as a result. The founders of the scheme engaged in insider trading, using their advance knowledge of when national debt was to be consolidated to make large profits from purchasing debt in advance. Huge bribes were given to politicians to support the Acts of Parliament necessary for the scheme. Company money was used to deal in its own shares, and selected individuals purchasing shares were given loans backed by those same shares to spend on purchasing more shares.

For more about the South Sea bubble, look here and here.

4) I had never heard of a rat satire before I read DRAGONFLY IN AMBER:


[Roger] pulled out a carton labeled JACOBITES, MISCELLANEOUS, and carried it to the table, singing,

Lowering the box with a thump, he bowed in response to Brianna’s giggling and turned back to the stacks, continuing in stentorian voice.

"Go to Campbell’s garden,
Where nae cat stands warden,
And the kale, it grows green.

The following explanation comes from a book called SUPERSTITIONS OF THE HIGHLANDS & ISLANDS OF SCOTLAND, published in 1900 by John Gregorson Campbell:


When a place is infested to a troublesome extent with rats or mice, and all other means of getting rid of the pests have failed, the object can be accomplished by composing a song, advising them to go away, telling them where to go, and what road to take, the danger awaiting them where they are, and the plenty awaiting them in their new quarters. This song is called the Rat (or Mouse) Satire, and if well composed the vermin forthwith take their departure.

An example of a Gaelic rat satire, along with some entertaining commentary on the genre, can be found here, in 'TWIXT BEN NEVIS AND GLENCOE, by Alexander Stewart, published in 1885.

5) The ostrich (Struthio camelus) is the largest species of bird, well over 6 feet tall, weighing 220-250 lbs. (Photo from Wikipedia.)


"What I have told you is not impossible, is it?”

I considered that one for a moment.

“Not technically impossible,” I conceded. “But certainly implausible."

"Have you ever seen an ostrich?" he asked, and, without inquiring, poured more brandy into my glass.

"You must admit that ostriches are frankly implausible," he said. "But clearly not impossible."

"One to you," I conceded. "But I do think that Fergus being the lost heir to the Comte St. Germain's fortune is slightly more implausible than an ostrich. Particularly if you consider the part about the marriage license. I mean...a lost legitimate heir? It is France we're talking about, isn't it?"

The photo below shows the size of an ostrich egg compared to a hen's egg.  (Implausible, definitely!  But not impossible.) 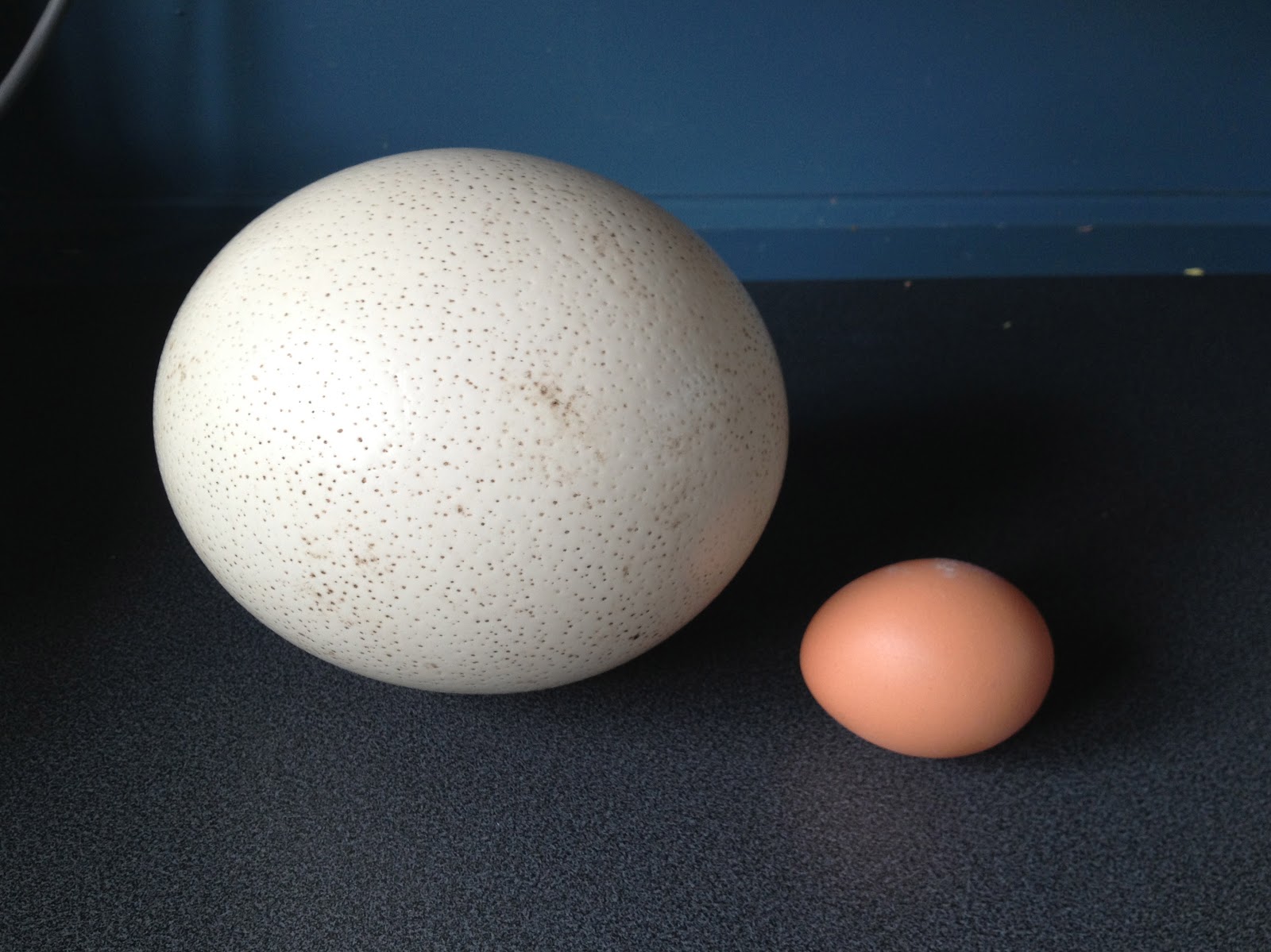 Here's a brief video of an ostrich mating ritual. (The male is the one with the black feathers.)

For more about ostriches, look here and here.