1) Blackthorn berries (Prunus spinosa), also known as sloe berries, are common in Europe, emerging in late autumn after the first frost of the year.


[Jamie] upended his game bag and let the three rabbits fall onto the table in a limp tumble of gray fur and crumpled ears. “And blackthorn berries,” he added, tipping out the contents of the dun bonnet, now stained inside with the rich red juice.

Jenny’s eyes brightened at the sight. “Hare pie,” she declared. “There’s no currants, but the berries will do even better, and there’s enough butter, thank God."


The blackthorn has an ominous image. The thorns of the blackthorn were used for pricking wax images for cursing. Witches were thought to carry black rods of blackthorn which could cause miscarriages. When witches were burned blackthorn sticks were thrown onto the fire. The sorcerer Major Weir was burned at the stake in 1670 with a blackthorn rod, which was described as the chief agent of his magic. Some traditions say that Christ's crown of thorns was made from blackthorn. The shillelagh, or Irish club is made from the dense, heavy blackthorn. The usher of the house of lords and the Order of the Garter is called Blackrod because he knocks on the doors of the house of parliament with a blackthorn rod to demand its opening. 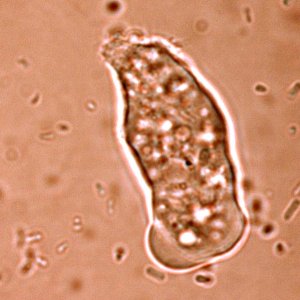 2) This photo shows Entamoeba histolytica, the organism that causes amoebic dysentery.  This is the illness that infected many of the people on Fraser's Ridge in A BREATH OF SNOW AND ASHES.


"There.” I stepped back, motioning Malva to come and look. “Do you see it? The big, clear thing in the middle, lobed, with the little flecks in it?”

She frowned, squinting one-eyed into the ocular, then drew in her breath in a gasp of triumph.

“I see it plain! Like a currant pudding someone’s dropped on the floor, no?"

"That’s it,” I said, smiling at her description in spite of the general seriousness of our investigation. “It’s an amoeba--one of the bigger sorts of microorganisms. And I very much think it’s our villain.”

We were looking at slides made from the stool samples I had retrieved from all the sick so far--for Padraic’s family was not the only one affected. There were three families with at least one person ill with a vicious bloody flux--and in all of the samples I had looked at so far, I had found this amoebic stranger.

“Is it really?” Malva had looked up when I spoke, but now returned to the eyepiece, absorbed. “However can something so small cause such a stramash in something so big as a person?”


The common symptoms of amoebic dysentery may include violent diarrhea, often accompanied with blood and/or mucus in the foul-smelling stools, severe colitis, frequent flatulence (gas and abdominal bloating), dehydration (can be prevented by drinking large amounts of vital liquids or any medication that can stop dehydration) and sometimes severe abdominal cramps and tenderness on the stomach, slight weight loss, moderate anemia, (an effect of the bloody stools) moderate fever, mild fatigue (an effect of dehydration) and mild chills.

Here is a diagram showing the life cycle of E. histolytica: 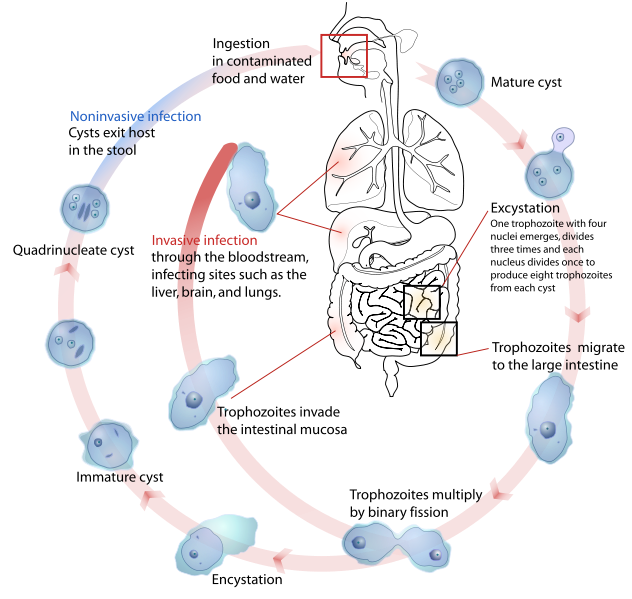 An outbreak of amoebic dysentery at the 1933 World's Fair in Chicago infected about 1,000 people.  I was interested to hear this, because my paternal grandparents met at that World's Fair. <g> 3) You will, of course, remember HMS Porpoise, the plague ship in VOYAGER.


"It’s persecution!” Jamie said indignantly. He stood behind me, looking over the rail of the Artemis. Kingston Harbor stretched to our left, glowing like liquid sapphires in the morning light, the town above half-sunk in jungle green, cubes of yellowed ivory and pink rose-quartz in a lush setting of emerald and malachite. And on the cerulean bosom of the water below floated the majestic sight of a great three-masted ship, furled canvas white as gull wings, gun decks proud and brass gleaming in the sun. His Majesty’s man-of-war Porpoise.

“The filthy boat’s pursuing me,” he said, glaring at it as we sailed past at a discreet distance, well outside the harbor mouth. “Everywhere I go, there it is again!”

Porpoises are small cetaceans, similar to dolphins, of the family Phocoenidae.  The photo above shows harbor porpoises in San Francisco Bay.  Click on the photo for a bigger view. (Photo credit: NPR)

How can you tell the difference between a porpoise and a dolphin?  The main difference is the shape of the teeth, as this site explains.


“When he was a young man, his father--the old king, you know?--obliged him to join the army, though he disliked it intensely. A horror of bloodshed. But he formed a deep attachment to another young soldier, and the two decided to flee the country together.”

“They were caught--of course,” Grey said, a sudden hollow opening behind his breastbone.

“Of course.” Stephan nodded. “They were brought back, both charged with desertion and treason, and the old king had Friedrich’s lover beheaded in the courtyard--Friedrich himself forced to watch from a balcony above. He fainted, my father said, even before the sword fell.”

Grey’s own face felt suddenly cold, his jaw prickling with sweat. He swallowed hard, forcing down a sense of dizziness.

This is a true story.  From Wikipedia:


The young prince was interested primarily in music and philosophy rather than the arts of war. He defied his authoritarian father, Frederick William I, and sought to run away with his close friend Hans Hermann von Katte. They were caught and the king nearly executed his son for "desertion"; he did force Frederick to watch the execution of Hans.

For more about Frederick the Great, look here. 5) This is an example of a stomacher from the 1760's.  (Photo credit: Kyoto Costume Institute.)  According to Wikipedia, 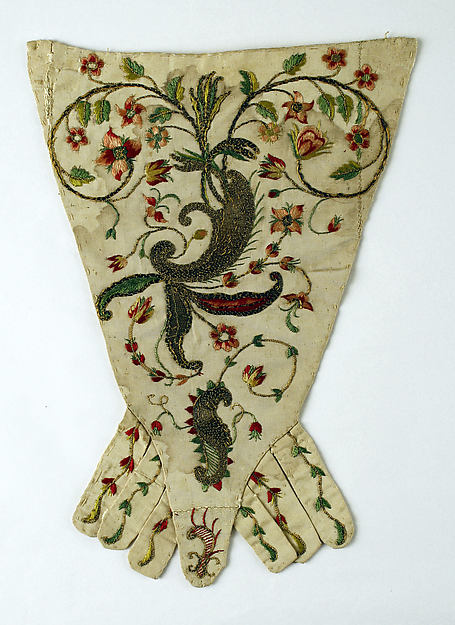 The photo above, from the Metropolitan Museum of Art, shows an embroidered stomacher, circa 1700-1750.


Phaedre murmured assent and left the tent, pausing only to shake out the blue thing she had been sewing and fold it carefully over her stool. It was a decorated stomacher for Brianna’s wedding dress, [Roger] saw, done with an elegant lacing of ribbons. He had a sudden vision of Brianna’s white breasts, swelling above a low neckline of dark indigo, and returned to the conversation at hand with some difficulty.

Here's an article about the history of stomachers.  You can see more stomacher photos here and here.

I hope you enjoyed these Friday Fun Facts! Look here to see all of my Friday Fun Facts blog posts, and please come back next week for more!
amoebic dysentery blackthorn berries diana gabaldon frederick the great outlander porpoise stomacher

Love this info...aren't those stomachers lovely. TY for the research and links :).