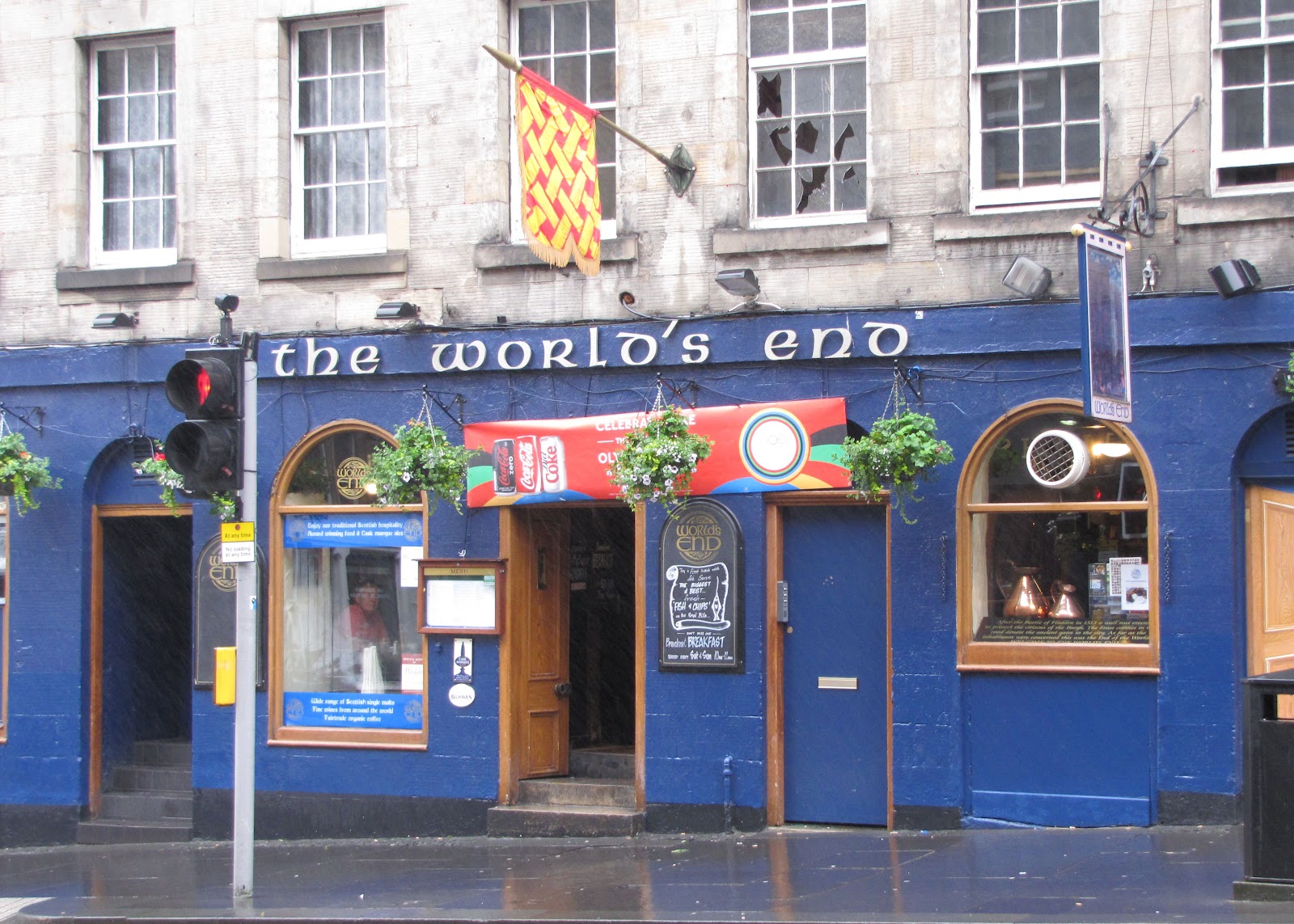 1) My sister Alice took this photo of the famous World's End pub on the Royal Mile in Edinburgh during our trip to Scotland in July, 2012.  I didn't actually get a chance to see it myself.  Have any of you been there? This is the explanation inside the pub of where the name "The World's End" came from.  (Photo credit: CoasterMadMatt, on Flickr.)


Besides the row of casks, there were a number of wooden crates stacked near the center of the room, against an odd little chunk of wall that stood by itself, rising some five feet out of the cellar floor, running back into the darkness.

I had heard of this feature of the tavern when we had stayed in Edinburgh twenty years before with His Highness Prince Charles, but what with one thing and another, I had never actually seen it before. It was the remnant of a wall constructed by the city fathers of Edinburgh, following the disastrous Battle of Flodden Field in 1513. Concluding--with some justice--that no good was likely to come of association with the English to the south, they had built a wall defining both the city limits and the limit of the civilized world of Scotland. Hence “The World’s End,” and the name had stuck through several versions of the tavern that had eventually been built upon the remnants of the old Scots’ wishful thinking.

For more about the history of the World's End, look here.

2) Here's a video of the Delta Rhythm Boys singing "Dry Bones". This song was a big hit in the 1950's, so it makes sense that Joe Abernathy would be familiar with it.

"Don't pay any attention to him," I told Horace. "You'll just encourage him."

You can see the lyrics here. 3) This is a medal depicting St. Dismas, also known as the "Good Thief" or the "Penitent Thief", one of the two men crucified along with Jesus.  According to this site.


Saint Dismas is known as the patron saint of second chances, prisoners, criminals, reformed thieves, persons on death row, and people who have made mistakes and seek forgiveness.

He sounds like the perfect patron saint for Fergus, doesn't he?


"I might perhaps have a small house built by Hogmanay,” [Fergus] murmured to himself. “Then I could send for Marsali and the child in the spring.” His hand went automatically to the vacant spot on his chest, where the greenish medal of St. Dismas had hung since his childhood.

He had come to join us in Georgia, leaving his young and pregnant wife behind in Jamaica, under the care of friends. He assured me that he had no fear for her safety, however, for he had left her also under the protection of his patron saint, with strict instructions not to remove the battered medal from around her neck until she was safely delivered.

I wouldn’t myself have thought that mothers and babies fell into the sphere of influence of the patron saint of thieves, but Fergus had lived as a pickpocket for all his early life, and his trust in Dismas was absolute.

4) This photo shows Britain's King George VI visiting troops during the Battle of Britain, Sept. 26, 1940.  Here's a bit from ECHO where Claire tells Roger about meeting him:


"I saw him once, you know." [Claire's] voice was muffled; she had turned away from him, probing under the drooping branches of a rhododendron.

"The King." She found something; he heard the rustle of leaves as she tugged at it, and the snap of the breaking stem.

"He came to Pembroke Hospital, to visit the soldiers there. He came and spoke separately to us--the nurses and doctors. He was a quiet man, very dignified, but warm in his manner. I couldn't tell you a thing that he said. But it was...remarkably inspiring. Just that he was there, you know."

You may recall that King George VI was the subject of the Oscar-winning 2010 movie, "The King's Speech".  (Terrific movie, by the way.)  Here he is in 1939, addressing the nation on the outbreak of war.  (Photo credit: BBC)

5) This diagram shows the difference between normal airflow and obstructive sleep apnea.  Click on the photo for a bigger view.

As Marsali explained in a letter to her mother, Laoghaire:


I must ask you to do something for love of me and my children. The trouble is with Henri-Christian. Because of his oddness of form, he has always had some trouble in  breathing, particularly when suffering from the catarrh, and has snored like a grampus since he was born. Now he has taken to stopping breathing altogether when he sleeps, save he is propped up with cushions in a particular position. Mother Claire had looked in his throat when she and Da saw us in New Bern and said then that his adenoids--this being something in his throat--were overlarge and might give trouble in future. (Germain has these, also, and breathes with his mouth open a good deal of the time, but it is not a danger to him as it is to Henri-Christian.)

I am in mortal terror that Henri-Christian will stop breathing one night and no one will know in time to save him. We take it in turns to sit up with him, to keep his head just right and to wake him when he stops breathing, but I do not know how long we can contrive to keep it up.


Obstructive sleep apnea (OSA)....occurs when there are repeated episodes of complete or partial blockage of the upper airway during sleep. During a sleep apnea episode, the diaphragm and chest muscles work harder to open the obstructed airway and pull air into the lungs. Breathing usually resumes with a loud gasp, snort, or body jerk. These episodes can interfere with sound sleep. They can also reduce the flow of oxygen to vital organs and cause irregular heart rhythms.

Here's a video of a three-year-old boy with OSA.  Watching this, you get a much better sense of how frightening it must have been for Marsali!

I've seen the pub when I was in Edinburgh last May but just from the outside. :)

Had a delightful lunch there with another couple from our Outlander tour! It was such a treat to visit the places I had read about in the book and we spotted the World's End on one of our many jaunts up and down the High Street, so it was a must see.

My husband and I had dinner at The World's End in 2007. We enjoyed it very much! They had a very unique kitchen set up and a wonderful dessert featuring raspberries, oats and whisky.

My husband and I went in for a roast lamb dinner at the World's End Pub in September 2013. He didn't realize it, but I was on my personal 'Outlander' tour. He thought we were just visiting Scotland.
Barbara MacDonald, Canada

You know, Karen, I do believe that your Friday Fun Facts are book worthy. Have you discussed with Lady G the possibility of compiling them into a book?

My husband & I visited Scotland for the first time in Aug 2013. We didn't get to The World's End that trip...but we're going back in June for 2 weeks & will make it a point to make a stop there. Also we'll be up in Stirling for the 700th anniversary of the Battle of Bannockburn. Castle Doune is nearby & we plan to tour it!