Here are this week's Friday Fun Facts about Diana Gabaldon's books. This is a collection of some of my favorite items from previous FFF posts. Hope you enjoy it! 1) Charles Edward Stuart really did have a picnic set made of gold and sterling silver, shown above. This must be the same picnic set mentioned by Lord Lovat, Jamie's grandfather, when he was considering what gift to send to Charles Stuart:


"Ha," said his lordship with satisfaction.  "We'll send the gold and sterling picnic set.  That's rich enough, but too frivolous to be interpreted as political support.  Besides," he added practically, "the spoon's dented."

(From DRAGONFLY IN AMBER, chapter 41, "The Seer's Curse". Copyright© 1992 by Diana Gabaldon. All rights reserved.)

As Roger explained in DRAGONFLY, Charles Stuart left the picnic set on the field at Culloden. It's currently on display in the National Museum of Scotland in Edinburgh. I saw it when I visited Scotland in 2012. Look here for more information.

2) Here's a song called "The Maid Gaed to the Mill", performed by Ewan MacColl and Peggy Seeger.  You may remember it from the scene near the beginning of A BREATH OF SNOW AND ASHES:


Roger was, of all things, singing now, if one could call it that. Or chanting, at least, the words to a very bawdy Scottish song, about a miller who is pestered by a young woman wanting him to grind her corn. Whereupon he does.

“He flung her down upon the sacks, and there she got her corn ground, her corn ground...” Roger was chanting hotly in her ear, his full weight pinning her to the ground and the stars spinning madly far above.

If you've seen Episode 105, "Rent", of the OUTLANDER TV series, you'll remember the clansmen singing this song on the road.

If the original Scots lyrics are too difficult to follow, you can see an English translation here. 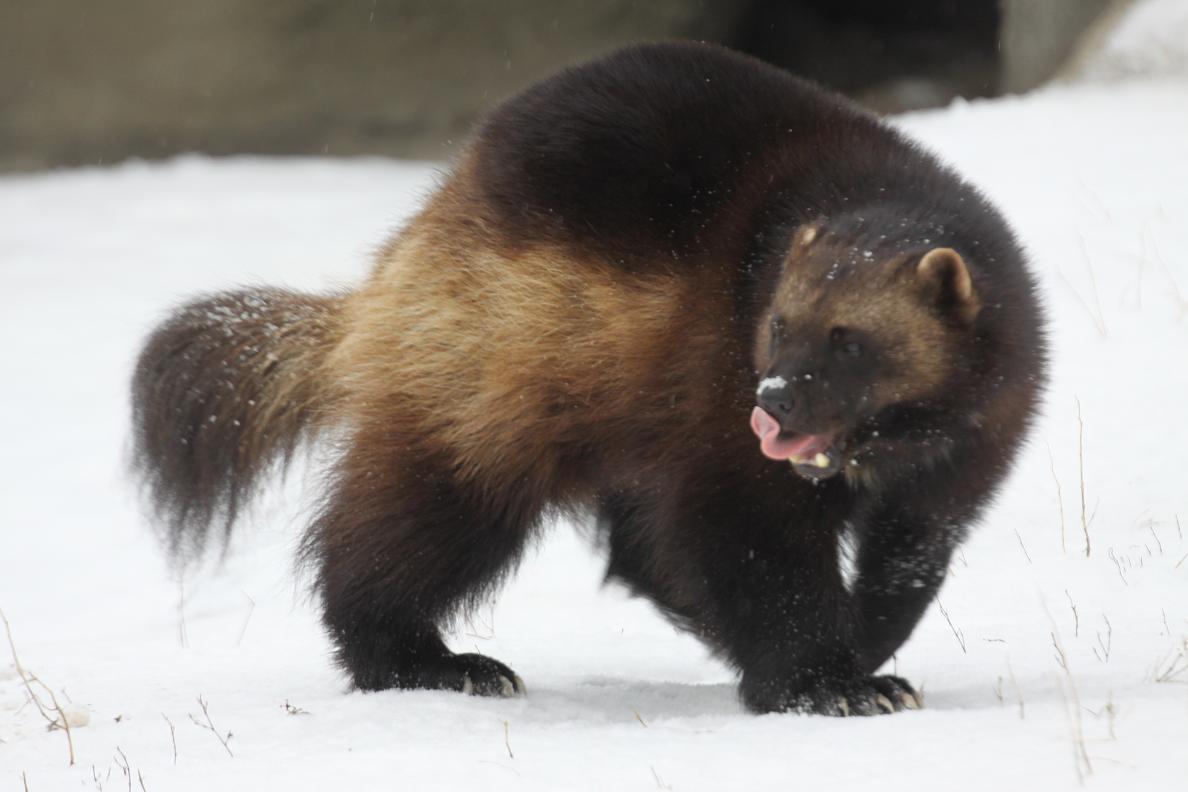 3) The photo above shows a glutton, also known as a wolverine.  (Why does it have two different names?  Look here for a somewhat tongue-in-cheek explanation.)  Here's a member of Young Ian's Mohawk tribe impersonating a glutton:


Walking Elk was short and heavily built—not so much unlike a glutton himself, which made his imitations that much more entertaining.

He turned his head, wrinkling up his nose and growling through his teeth, as the glutton caught the hunter’s scent. Then he changed in a flash, became the hunter, creeping carefully through the brush, pausing, squatting low--and springing upward with a sharp yelp, as his buttock encountered a thorny plant.

The men around the fire whooped as Walking Elk became the glutton, who looked at first astonished at the noise, and then thrilled to have seen its prey. It leaped from its lair, uttering growls and sharp yips of rage. The hunter fell back, horrified, and turned to run. Walking Elk’s stubby legs churned the pounded earth of the longhouse, running in place. Then he threw up his arms and sprawled forward with a despairing “Ay-YIIIIII!” as the glutton struck him in the back.

The men shouted encouragement, slapping their palms on their thighs, as the beleaguered hunter managed to roll onto his back, thrashing and cursing, grappling with the glutton that sought to tear out his throat.

The video above shows a brief excerpt about wolverines from the BBC's wonderful nature documentary series, "Planet Earth". For more information about wolverines, look here. 4) This diagram shows what an abdominal aortic aneurysm looks like. Just looking at the picture is a little scary!  It looks like a balloon that's about to pop, doesn't it?  Here's a brief video animation:

It's easy to see why such a condition would be fatal in the 18th century.

[Grannie Wilson] put a trembling hand to her belly.

“I do feel that wee bit poorly,” she whispered.

I put my own hand on her abdomen, and felt it instantly. A pulse, where no pulse should be. It was irregular, stumbling, and bumping--but most assuredly there.

“Jesus H. Roosevelt Christ,” I said. I didn’t say it loudly, but Mrs. Crombie gasped, and I saw her apron twitch, as she doubtless made the horns beneath it.

I hadn’t time to bother with apology, but stood and grabbed Roger by the sleeve, pulling him aside.

“She has an aortic aneurysm,” I said to him very softly. “She must have been bleeding internally for some time, enough to make her lose consciousness and seem cold. It’s going to rupture very soon, and then she’ll die for real.”

(From A BREATH OF SNOW AND ASHES, chapter 39, "I Am the Resurrection". Copyright© 2005 by Diana Gabaldon. All rights reserved.)

5) This is what hyacinth looks like.  (Photo from Wikipedia.)  What beautiful flowers!  It really is a shame that Jamie's allergic to them.


"Are you all right?” I looked around for some means of disposal, and settled for dropping the sachet into a stationery box on my desk at the far side of the room.

“Goodness!” I hastily flung the window open, and motioned to him. He obligingly stuck his head and shoulders out into the wet drizzle of the morning, breathing in gusts of fresh, hyacinth-free air.

“Och, that’s better,” he said with relief, pulling in his head a few minutes later. His eyes widened. “What are ye doing now, Sassenach?”

“Washing,” I explained, struggling with the back laces of my gown. “Or getting ready to, at least. I’m covered with oil of hyacinth,” I explained, as he blinked. “If I don’t wash it off, you’re liable to explode."

For more information about hyacinths, look here.  There are a number of interesting facts on that page, including the following:


An ancient Greek legend describes the origin of the Hyacinth. Two of the gods, Apollo and Zephyr, adored a handsome young Greek called Hyakinthos. Apollo was teaching Hyakinthos the art of throwing a discus.

Zephyr, who was the god of the west wind, was overwhelmed with jealousy and he blew the discus back. It struck Hyakinthos on the head and killed him. From his blood grew a flower, which the sun god Apollo named after him.

I hope you enjoyed this 12th installment of the Best of the Friday Fun Facts! Here are the previous collections: