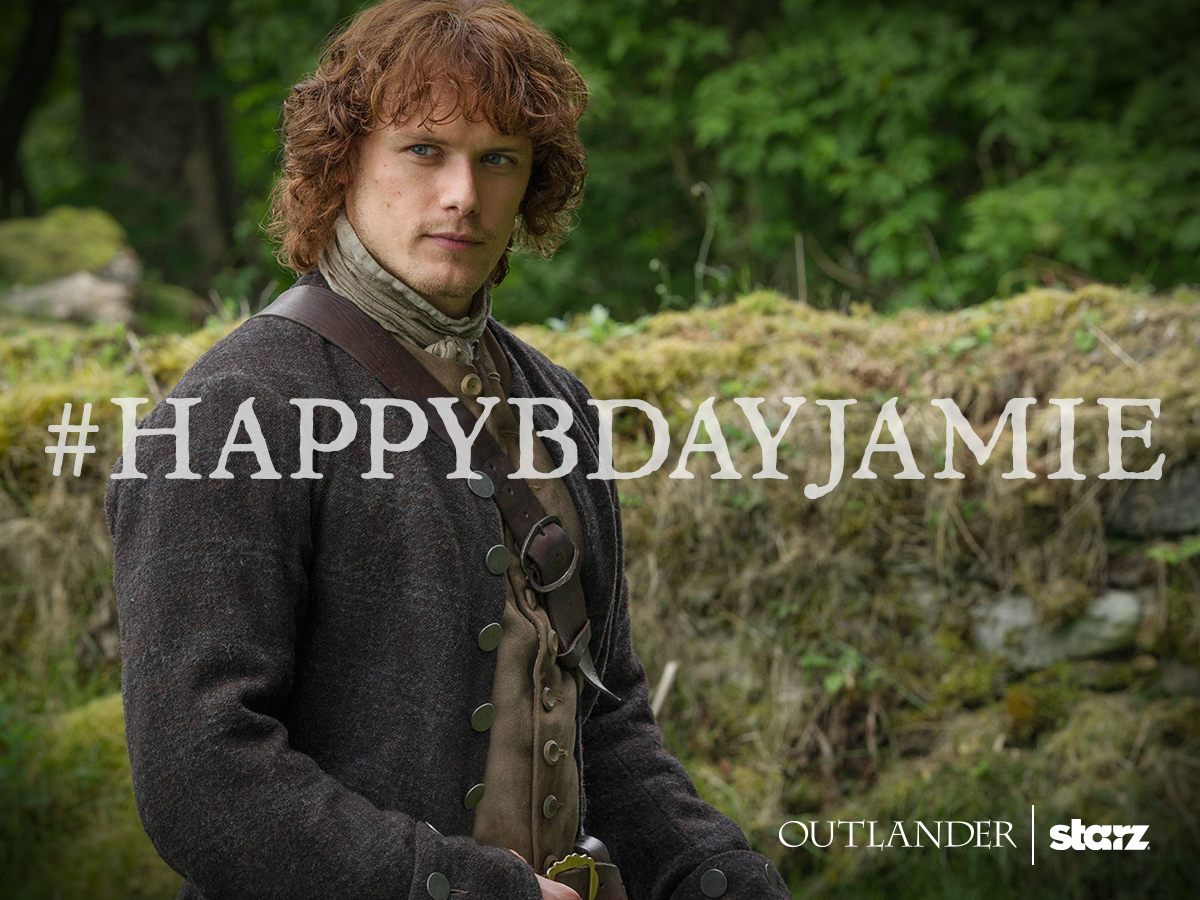 Wishing a very happy birthday to our favorite red-heided Scot, James Alexander Malcolm MacKenzie Fraser, who turns 294 years old today! He was born on May 1, 1721.

In honor of Jamie's birthday, I'm reposting the "ABCs of Jamie Fraser" list that I originally posted here in 2011. I hope you enjoy them!

I borrowed this idea from a writer's exercise that was posted on Compuserve. The idea is to list one word pertaining to the character for each letter of the alphabet, along with a brief explanation. Here's my alphabet for Jamie Fraser.

A - Ardsmuir. As difficult as those three years in prison were for Jamie, caring for the other men gave him something to live for.

B - Boats. Sheer torture, for someone who suffers from seasickness as acute as Jamie's. "I hate boats," Jamie said through clenched teeth. "I loathe boats. I view boats with the most profound abhorrence." (DRUMS, Chapter 6, "I Encounter a Hernia")

C - Claire, of course. And his children -- all of them, whether they're born of his blood or not.

D - Duty. Jamie takes his duty seriously, even when it means doing things he doesn't want to do, like raising a militia company to fight against the Regulators in FIERY CROSS.

E - Eloquence. Jamie's way with words takes my breath away sometimes. "And when my body shall cease, my soul will still be yours. Claire--I swear by my hope of heaven, I will not be parted from you." (DRUMS, Chapter 16, "The First Law of Thermodynamics")

F - Finger. Jamie's much-abused fourth finger on his right hand, which caused him so much pain and trouble for years, and now lies buried at Lallybroch, with Ian. "I'll keep it safe 'til ye catch me up." (ECHO, Chapter 81, "Purgatory II")

G - God. Jamie's Catholic faith is very important to him, even if he's rarely in a position to go to Mass or have a priest hear his confession. And sometimes God answers his prayers. ("Lord, that she may be safe. She and the child.")

I - Intelligence. Jamie is a very smart man, and a logical thinker. And he learns very fast!

J - Jenny. Say what you will about her, but Jamie loves his sister as deeply as he does Claire.

K - Killing. Jamie kills when he must, in self-defense or in defense of his family or loved ones. But it bothers him. "I am a violent man, and I ken it well," he said quietly. He spread his hands out on his knees; big hands, which could wield sword and dagger with ease, or choke the life from a man. (DRUMS, Chapter 13, "An Examination of Conscience")

L - Lallybroch. I don't think you can fully understand Jamie's character without appreciating how much Lallybroch influenced him. It's sad to think that he might never go back there.

M - Memories. Will Jamie ever recall more of Culloden, and what happened with Jack Randall?

N - Nephew. Jamie bonded with Young Ian when he was only minutes old, and they've been through quite a lot together.

O - Outdoors. Where some of Jamie and Claire's most memorable "mmmmphmm" moments have taken place. :-)

R - Red-heided. All teasing about "the nameless and abominable colour of his hair" aside, this is one of the things I liked best about Jamie from the beginning, because I'm also a left-handed redhead. :-)

S - Stubbornness. "Jamie was a sweet laddie, but a stubborn wee fiend, forbye." Jenny's voice by her ear startled her. "Beat him or coax him, it made no difference; if he'd made up his mind, it stayed made up." (DRUMS, Chapter 34, "Lallybroch")

T - Tone-deaf. One of Jamie's more endearing traits, in my opinion, and proof that he's not perfect.

U - Uxorious. Roger refers to Jamie as "deeply uxorious" in ABOSAA. It's an archaic word that according to Diana Gabaldon means "a man who was clearly and obviously in love with his wife."

V - Vows. The blood vow at Jamie and Claire's wedding, for one. Jamie's promise never to beat her again, for another. "I don't make idle threats, Sassenach," he said, raising one brow, "and I don't take frivolous vows." (OUTLANDER, Chapter 22, "Reckonings")

W - Will-power. Jamie has an amazing strength of will. Whether it's submitting to rape and torture at the hands of Jack Randall without fighting back, or not reacting to the presence of a pair of naked Indian girls in his bed in ABOSAA, his self-control is impressive.

X - eXample. Jamie doesn't lead by sitting back and giving orders. He leads by example, as when he takes the punishment for Angus MacKenzie's possession of a scrap of tartan at Ardsmuir. No wonder his men will follow him anywhere.

Y - Youthful. It's hard to remember just how young Jamie was in OUTLANDER, barely 22. Even in his mid-50's, he still looks remarkably good for his age. As Claire remarks, "Do you know, you haven't got a single gray hair below the neck?" (ECHO, chapter 8, "Spring Thaw")

Z - Zippers, and other oddities of 20th-century life that Claire has had to explain to Jamie over the years. 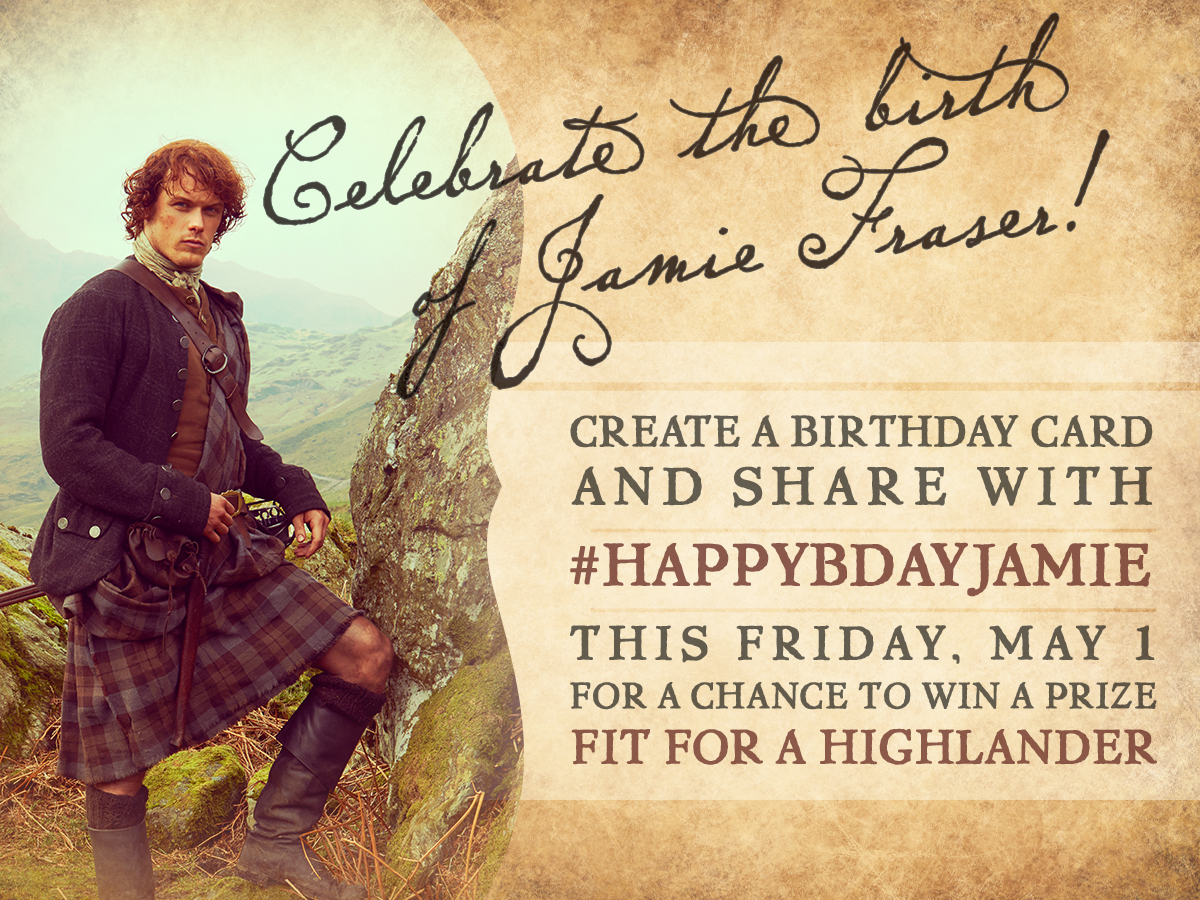 If you're on Twitter, please remember to tag your tweets today (Friday, May 1) with #HappyBDayJamie, in celebration of Jamie's birthday.  STARZ is running a birthday-card contest, and I think it will be fun to see what everyone comes up with.