4/03/2011 08:19:00 AM
I've always found the descriptions of plants, herbs, and their medicinal uses in Diana Gabaldon's books very interesting.  Here are a few of the more memorable, colorful, or useful ones mentioned in the OUTLANDER books.  Hope you enjoy these!

I looked down and saw a layer of fallen rowan berries, gleaming red and black among the grass.  Very appropriate, I thought, vaguely amused.  I had fallen down under a rowan--the Highland protection against witchcraft and enchantment.

Brianna fizzed with laughter. "I'd hate to see what they used for toilet paper then," she said.

Comfrey - one of Claire's most useful herbs 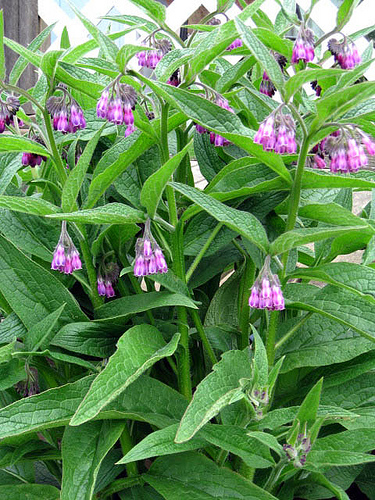 I threw several cloves of peeled garlic into the boiling water with some of the witch hazel, then added the cloth strips to the mixture.  The boneset, comfrey, and cherry bark were steeping in a small pan of hot water set by the fire.  The preparations had steadied me a bit.  If I didn't know for certain where I was, or why I was there, at least I knew what to do for the next quarter of an hour.

"What are you doing, Mr. Fraser?" Grey asked, in some bewilderment.
Fraser looked up, mildly surprised, but not embarrassed in the slightest.
"I am picking watercress, Major."
"I see that," Grey said testily.  "What for?"
"To eat, Major," Fraser replied evenly.  He took the stained cloth bag from his belt and dropped the dripping green mass into it.
"Indeed?  Are you not fed sufficiently?" Grey asked blankly.  "I have never heard of people eating watercress."
"It's green, Major."
In his fatigued state, the Major had suspicions that he was being practiced upon.
"What in damnation other color ought a weed to be?" he demanded.

Still holding my eyes with his own, he reached out his free hand, fumbling over the rocks ntil he touched a bunch of nettles.  He drew in his breath as his fingers touched the prickly stems, but his jaw clenched; he closed his fist and ripped the plants up by the roots.

Claire advised Marsali to take tansy oil to keep from getting pregnant, but somehow I don't think she actually did. <g>

I had been fortunate enough to find four large ginseng roots the week before.  I fetched all four from my medicine chest and pressed them into her hands, smiling.  [Nayawenne] looked back at me, then grinned, and untying the cloth bag from her belt, thrust it at me.  I didn't have to open it; I could feel the four long, lumpy shapes through the cloth.

I laughed in return; yes, we definitely spoke the same language!

And finally, here's an 18th century book of herbal remedies, from lowland Scotland.  It's fully digitized and indexed.  You can browse through the pages to see the actual 18th century handwritten text, or use the index to go directly to the topic you're interested in.

The spelling is inventive, to say the least, but it's a fascinating read.  I think Claire would have examined this book very carefully.

Wonderful entry. I love that scene between Lord John and Jamie.

Thanks, Carla, glad you enjoyed it!

Thanks, Deniz! That's one of my favorite LJ/Jamie moments, too. :-)

Hey Karen, The Mullein leaves grow quite abundanetly on our farm here in Canada. My father refers to them as "the farmers hanky". They are actually quite good to blow your nose with! I have now passed this 'tradition' to my kids.

I like the foliage of that watercress :) Thanks for sharing this. I love plants.

I am amazed at how many different meds/treatments can be made from all these herbs and plants!!! IMPRESSIVE!! Great post thanks for sharing :)