1) This is Medmenham Abbey, in Buckinghamshire, England, site of the notorious 18th-century Hellfire Club. (Photo credit: Hilofoz, on Flickr.) Click on the photo for a bigger view.

Sir Francis Dashwood (1708-1781) was a real historical figure.  You may remember Lord John's encounter with Dashwood in "Lord John and the Hellfire Club".


Grey squinted against the haze of smoke in the room. The man was heavy-bodied, but betrayed no softness of flesh; the sloping shoulders were thick with muscle, and if waist and calves were thick as well, it was by a natural inclination of form, rather than the result of indulgence.

“I have heard the name,” Grey said. “A political of some minor repute?”

“In the arena of politics, yes,” Lady Lucinda agreed, not taking her eyes from the man. “In others … less minor. In fact, his repute in some circles is nothing short of outright notoriety.”

A reach for a glass stretched the satin of Dashwood’s broidered plum-silk waistcoat tight across a broad chest, and brought into view a face, likewise broad, ruddy in the candle glow and animated with a cynic laughter. He wore no wig, but had a quantity of dark hair, curling low across the brow.

For more about the Hellfire Club, look here and here. 2) This illustration, circa 1742, shows a soldier of the 43rd Highlanders regiment (later renumbered the 42nd) who were also known as the Black Watch (Am Freiceidan Dubh in Gaelic). The Redcoats who captured Jamie in OUTLANDER would have worn uniforms similar to this.


“It’s the Watch,” [Jamie] said, nodding back in the direction of the inn. “We’re safe enough, but I thought we’d as soon be a bit further away.”

I had heard of the famous Black Watch, that informal police force that kept order in the Highlands, and heard also that there were other Watches, each patrolling its own area, collecting “subscriptions” from clients for the safeguarding of cattle and property. Clients in arrears might well wake one morning to find their livestock vanished in the night, and none to tell where they had gone--certainly not the men of the Watch. I was seized by a sudden irrational terror.

“They’re not looking for you, are they?" 
"Have you ever drunk sangria, Mrs. Fraser?”

I opened my mouth to say “Yes,” thought better of it, and said, “No, what is it?” Sangria had been a popular drink in the 1960s, and I had had it many times at faculty parties and hospital social events. But for now, I was sure that it was unknown in England and Scotland; Mrs. Fraser of Edinburgh would never have heard of sangria.

“A mixture of red wine and the juices of orange and lemon,” Lawrence Stern was explaining. “Mulled with spices, and served hot or cold, depending upon the weather. A most comforting and healthful beverage, is it not, Fogden?"

Sangria is a popular drink in Spain and Portugal. According to Wikipedia:


It normally consists of wine, chopped fruit, a sweetener, and a small amount of added brandy. Chopped fruit can include orange, lemon, lime, apple, peach, melon, berries, pineapple, grape, kiwifruit and mango. A sweetener such as honey, sugar, syrup, or orange juice is added....The use of the word sangria in labels is now restricted under European law. Only sangria made in Spain and Portugal will be allowed to sold under that name after the European Parliament green-lighted new wine labeling in January 2014.

If you want to try making it yourself, here is a recipe for Mamacita's Sangria, from Outlander Kitchen. 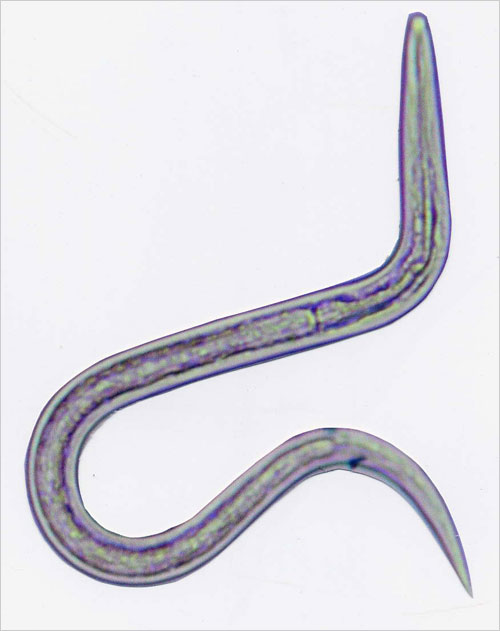 4) The hookworm is a tropical parasite called Necator americanus. (Photo credit: New York Times) You may remember the scene in A BREATH OF SNOW AND ASHES where Claire diagnosed Bobby Higgins with hookworms:


“Hookworms are parasites that burrow through the skin--most often through the soles of the feet--and then migrate through the body until they reach your intestines--your, um, innards,” I amended, seeing incomprehension cross his face. “The adult worms have nasty little hooked bills, like this”--I crooked my index finger in illustration--“and they pierce the intestinal lining and proceed to suck your blood. That’s why, if you have them, you feel very weak, and faint frequently.”

From the suddenly clammy look of him, I rather thought he was about to faint now, and guided him hastily to a stool, pushing his head down between his knees.

“I don’t know for sure that that’s the problem,” I told him, bending down to address him. “I was just looking at the slides of Lizzie’s blood, though, and thinking of parasites, and--well, it came to me suddenly that a diagnosis of hookworms would fit your symptoms rather well.”

This diagram shows the life cycle of the hookworm. (Click on the photo for a bigger view.)


Hookworms live in the small intestine. Hookworm eggs are passed in the feces of an infected person. If the infected person defecates outside (near bushes, in a garden, or field) of if the feces of an infected person are used as fertilizer, eggs are deposited on soil. They can then mature and hatch, releasing larvae (immature worms). The larvae mature into a form that can penetrate the skin of humans. Hookworm infection is mainly acquired by walking barefoot on contaminated soil. One kind of hookworm can also be transmitted through the ingestion of larvae.

Here's an article from the New York Times from July 1, 2008, about hookworms as a possible treatment for allergies -- as unlikely as that sounds!

5) I had never heard of waterhorses (each-uisge in Gaelic) or kelpies before I read Diana Gabaldon's books. (This illustration of a kelpie is by kotorikurama, on DeviantArt.com.)

Remember the story Rupert told in OUTLANDER, about the waterhorse's chimney?


"There’s a spot at the eastern end of Loch Garve, ye ken,” [Rupert] said, rolling his eyes around the gathering to be sure everyone was listening, “that never freezes. It’s always black water there, even when the rest o’ the loch is frozen solid, for that’s the waterhorse’s chimney.”

The waterhorse of Loch Garve, like so many of his kind, had stolen a young girl who came to the loch to draw water, and carried her away to live in the depths of the loch and be his wife. Woe betide any maiden, or any man, for that matter, who met a fine horse by the water’s side and thought to ride upon him, for a rider once mounted could not dismount, and the horse would step into the water, turn into a fish, and swim to his home with the hapless rider still stuck fast to his back.

You can see a version of this story here: The Kelpie of Loch Garve

There seems to be some confusion about the difference between a kelpie and a waterhorse. Some people use the terms interchangeably. Others insist that kelpies inhabit streams and rivers, while the each-uisge lives in the sea.

If you're skeptical about tales of kelpies and waterhorses, here's a brief video that might change your mind. <g>

You may have heard about the pair of giant Kelpie sculptures that were recently installed in Falkirk, Scotland. Here's an article about them from the BBC website, dated February 12, 2014.

Karen,sorry, I left my comment about Medmenham Abbey photo at the bottom of the page,wrong section. Can you find it? Jean Macfie