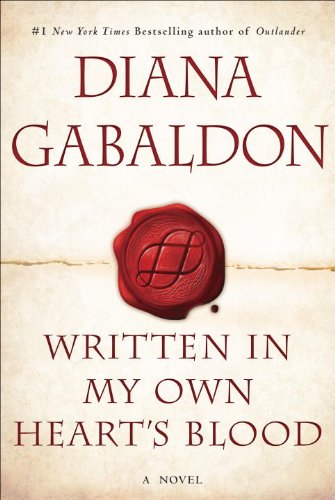 Diana Gabaldon is getting very close to the end of the Final Frenzy of WRITTEN IN MY OWN HEART'S BLOOD!

This is the stage where she's spending pretty much ALL her waking hours writing.  She says she expects to be done with Section 7 (the last section of the book) later this week!!  As for what happens next, she described it on Compuserve this way:


Actually, the writing will be succeeded by two weeks of Further Frenzy, but composed of the last bits of answering copy-edits (of the stuff I'm writing right now) and reading the first-pass galleys (which have to be completely done and returned on the 26th).  After which, I'm on call for jury duty for a week. <wry g>  Should be relaxing...

Then several things happen in May--a luncheon on the 6th, a Conversation with George RR [Martin] on the 10th (in Albuquerque), a book festival in Shuswap <g>, followed by a week of promotional Stuff (that I can't talk about, but no, it's not the start date for the series) for Sony.  _THEN_ we get to go to Disneyland. <g>  Can't wait!

But yes, having the writing finished will be a Big, BIG Thing.

Sending her lots of positive writing vibes and plenty of virtual Diet Coke to get her through these last few days of the Final Frenzy!

(And yes, she will certainly announce it publicly when the book is DONE. <g>  Stay tuned!)
book 8 diana gabaldon final frenzy moby mohb outlander written in my own heart's blood