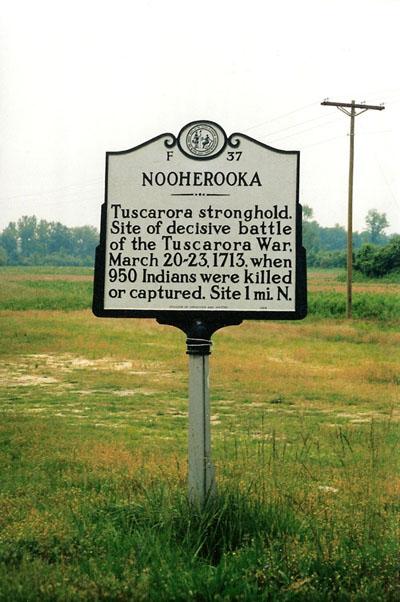 The pair of signs pictured above commemorate those killed on both sides in the Tuscarora War of 1711-13. (Photo credits: top: Bryan, on Flickr; bottom: loo% noble savage & pope, on Flickr.)


The Tuscarora War, [Myers] explained, had been a short-lived but brutal conflict some forty years before, brought on by an attack upon some backcountry settlers. The then governor of the colony had sent troops into the Tuscarora villages in retaliation, and the upshot was a series of pitched battles that the colonists, much better armed, had won handily--to the devastation of the Tuscarora nation.

Myers nodded toward the darkness.

“Ain’t no more than seven villages o’ the Tuscarora left, now--and not above fifty or a hundred souls in any but the biggest one.” So sadly diminished, the Tuscarora would quickly have fallen prey to surrounding tribes and disappeared altogether, had they not been formally adopted by the Mohawk, and thus become part of the powerful Iroquois League.

For more information about the Tuscarora in Colonial North Carolina, look here and here.  The map here is also quite informative. 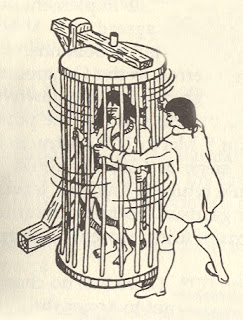 2) A whirligig was an 18th century punishment device.  Lord John and Percy saw one in LORD JOHN AND THE BROTHERHOOD OF THE BLADE:

“A whirligig.” A cylindrical cage made of slats, with a door in one side. It was used for minor punishments, lateness or missing equipment. “You put a man inside, and two men spin it round.”


The Whirligig, which was also known as the Whirl Gig or even the Pritty Whim, was a cage-like contraption in the form of a tube, large enough to fit one person and suspended on a couple of swivels at the top and bottom.  The offender was placed inside and the cage spun round at great speed by a couple of soldiers for a set period of time. The result was that the person became very giddy and extremely sick. A certain Mrs Malhone would have been able to confirm this. She ‘was committed for proper reasons to the whirligig during two hours. It gave great pleasure to the spectators.’

I think it would be hard to take more than a few minutes in a device like that, let alone several hours! 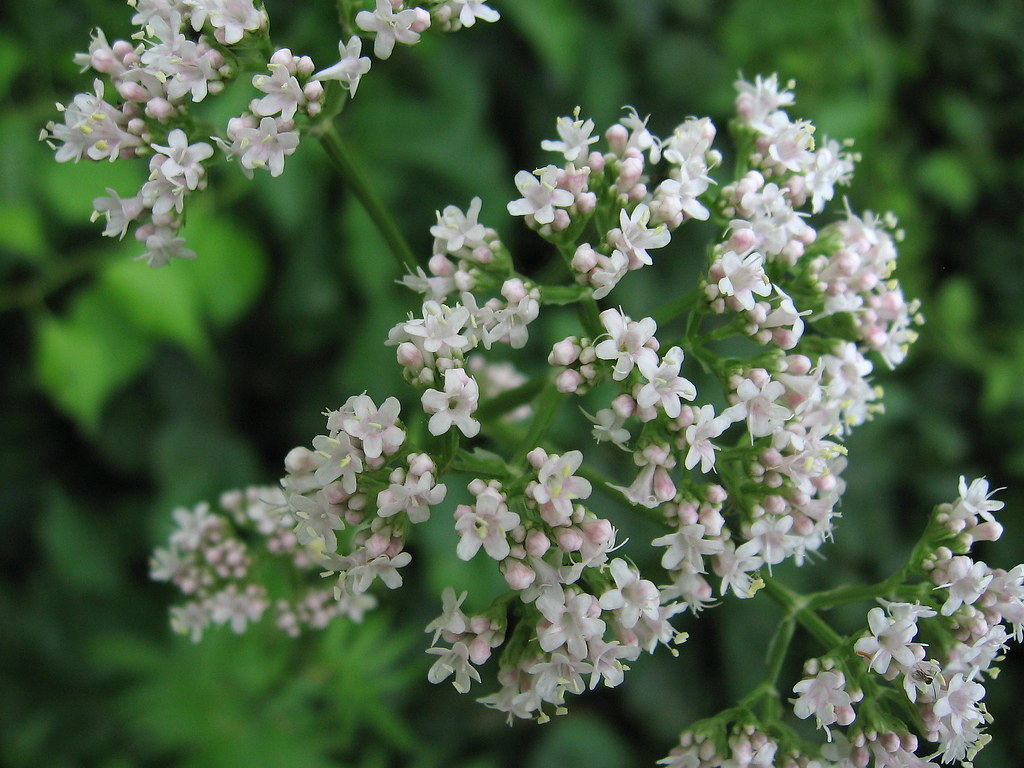 According to A MODERN HERBAL (published in 1931, and one of Diana Gabaldon's reference sources):


The drug allays pain and promotes sleep. It is of especial use and benefit to those suffering from nervous overstrain, as it possesses none of the after-effects produced by narcotics.

Claire is very familiar with the medicinal uses of valerian, as we saw in this scene from DRUMS OF AUTUMN, when Lord John and Young Ian had the measles:


I rose and went to the cupboard. I took down three jars: catmint, valerian, and wild ginger. I took down the marble mortar and tipped the dried leaves and root chunks into it. A drop of water fell from the kettle, hissing into steam.

“What are you doing?” Lord John asked.

“Making an infusion for Ian,” I said, with a nod toward the trundle. “The same I gave you four days ago.”

“Ah. We heard of you as we traveled from Wilmington,” Grey said. His voice was casual now, making conversation. “You are well known in the countryside for your skills, it would appear.”


People use valerian to relieve anxiety, depression, and poor sleep, and also to ease menstrual and stomach cramps. Valerian has a mild calming effect that does not usually result in sleepiness the next day. As a sleep aid, valerian seems to be most effective for people who have trouble falling asleep and who consider themselves to be poor sleepers. It also has had good results for people who wake up during the night.

Have any of you tried it? 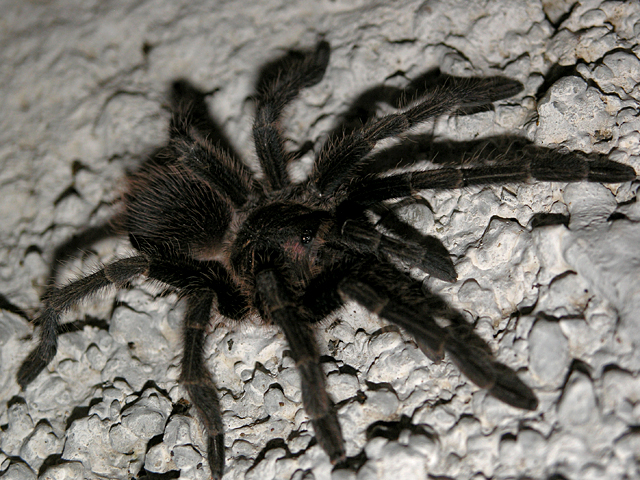 
I returned from one of these expeditions on the afternoon of the third day, with several large lily-roots, some shelf fungus of a vivid orange, and an unusual moss, with a live tarantula--carefully trapped in one of the sailor’s stocking caps and held at arm’s length--large and hairy enough to send Lawrence into paroxysms of delight.


Despite their fearsome appearance, tarantulas are not threatening to humans. Their venom is milder than a honeybee, and though painful, their bites are not harmful. In fact, tarantulas have become a popular pet for arachnophiles around the world. 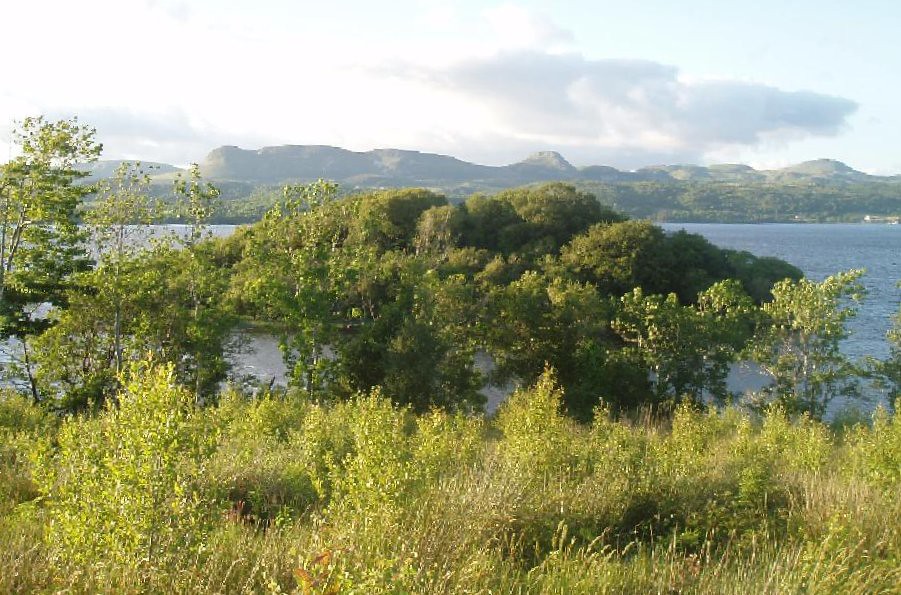 5) This is the Lake Isle of Innisfree, in Lough Gill, County Sligo, Ireland. (Photo credit: alanaplin, on Flickr.)


The cabin’s clearing was still filled with sunlight, though, filtered through a yellow blaze of chestnut trees. Claire was in the palisaded garden, a basin on one hip, snapping beans from poled vines. Her slender figure was silhouetted dark against the sun, her hair a great aureole of curly gold.

“Innisfree?” Jamie glanced at her, bewildered.

She hesitated, but there was no way out of explaining.

“It’s a poem, or part of one. Daddy always used to say it, when he’d come home and find Mama puttering in her garden--he said she’d live out there if she could. He used to joke that she--that she’d leave us someday, and go find a place where she could live by herself, with nothing but her plants.” 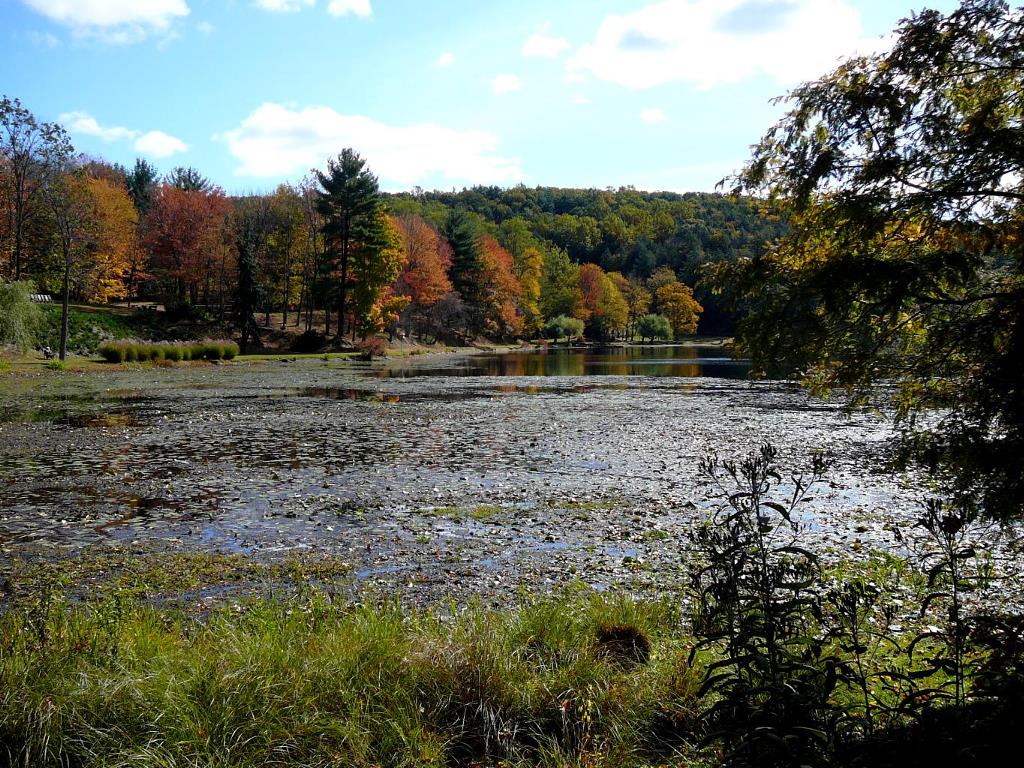 Here's another view.  (Photo credit: Steve Rose NYC, on Flickr.)  The poem Brianna was referring to, The Lake Isle of Innisfree, by William Butler Yeats, was first published in 1890.


I will arise and go now, and go to Innisfree,
And a small cabin build there, of clay and wattles made;
Nine bean rows will I have there, a hive for the honey bee,
And live alone in the bee loud glade.

And I shall have some peace there, for peace comes dropping slow,
Dropping from the veils of the morning to where the cricket sings;
There midnight's all a glimmer, and noon a purple glow,
And evening full of the linnet's wings.

I will arise and go now, for always night and day
I hear lake water lapping with low sounds by the shore;
While I stand on the roadway, or on the pavements grey,
I hear it in the deep heart's core.

You can hear actor Anthony Hopkins reciting this poem here. (Thanks to Bev C. on Compuserve for the link!)

I take valerian for my insomnia & to help my anxiety levels. It does work & I feel it is better then some of the otc meds for the same problems.

My doctor recommended taking melatonin with valerian root for a mild sleep aid. Readily available in drug/grocery stores. Works like a charm!