In honor of Tartan Day, which is coming up on Saturday, this edition of the Friday Fun Facts is devoted to All Things Scottish! 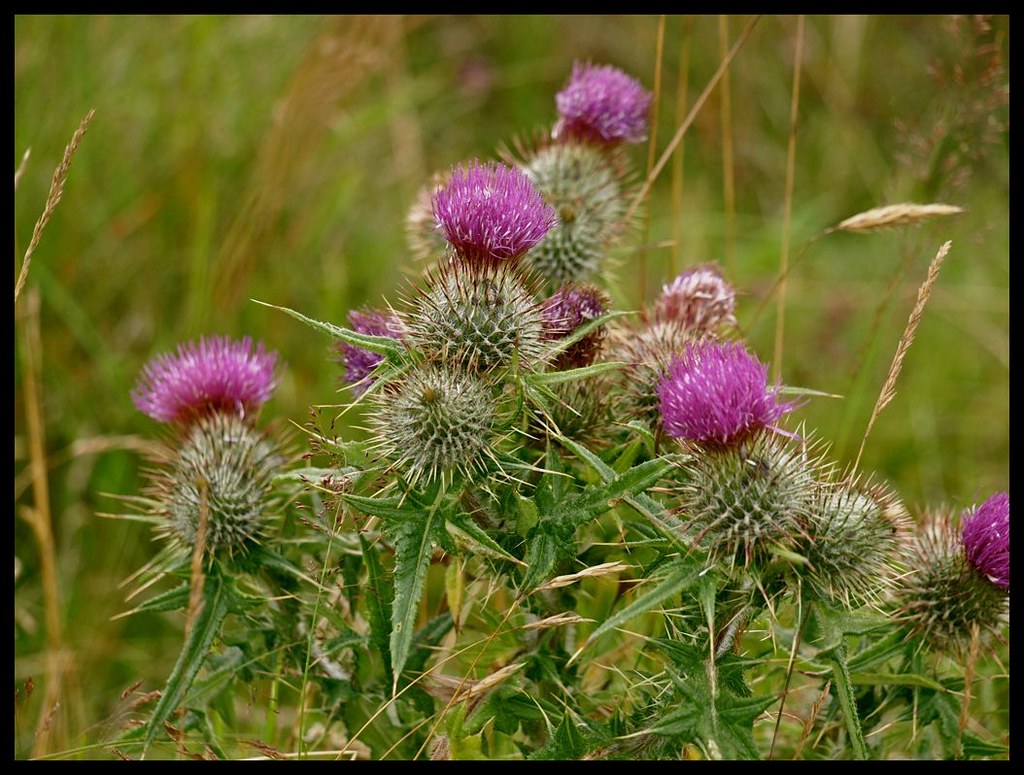 1) The thistle is Scotland's national flower.  (Photo credit: Valentina, on Flickr.)  From Wikipedia:


Prickles often occur all over the plant – on surfaces such as those of the stem and flat parts of leaves. These are an adaptation that protects the plant against herbivorous animals, discouraging them from feeding on the plant.


Legend has it that at some point during [the invasion of Scotland by the Norse in 1263] the Norsemen tried to surprise the sleeping Scottish Clansmen. In order to move more stealthily under the cover of darkness the Norsemen removed their footwear. But as they crept barefoot they came across an area of ground covered in thistles and one of Haakon's men unfortunately stood on one and shrieked out in pain, thus alerting the Clansmen to the advancing Norsemen.

The thistle has been a national symbol of Scotland ever since. It first appeared on Scottish coins in 1470, during the reign of King James III. 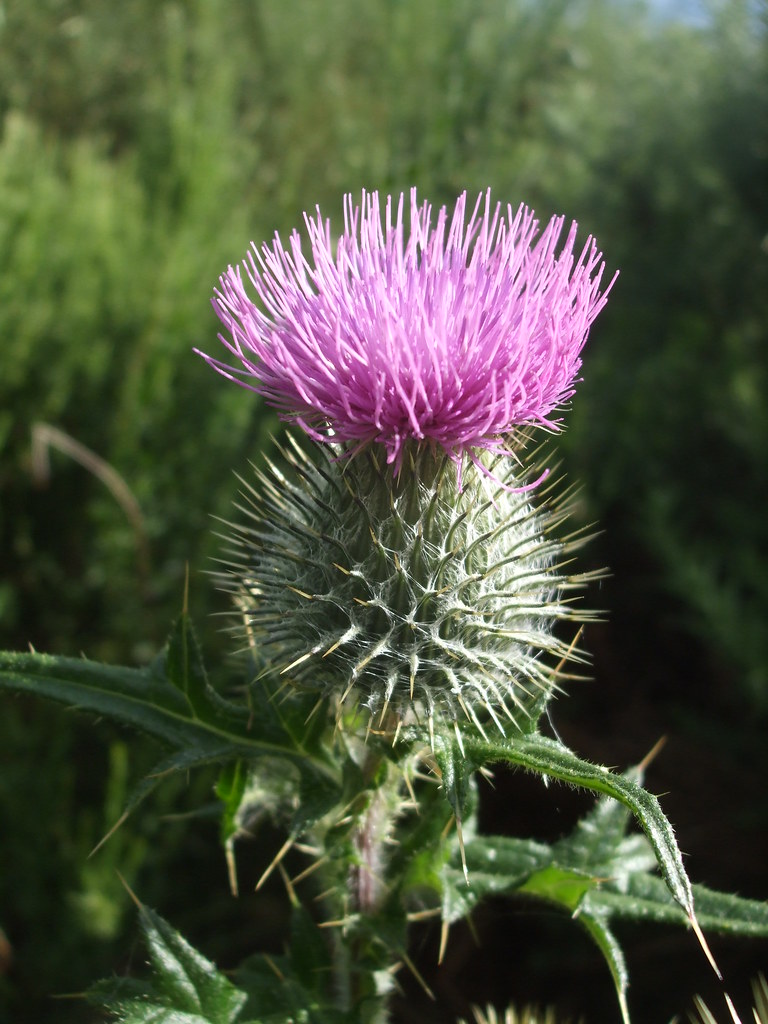 
Reaching, he took the package from my lap and tore away the wrapping, revealing a wide silver band, decorated in the Highland interlace style, a small and delicate Jacobean thistle bloom carved in the center of each link.

So much I saw, and then my eyes blurred again.

And of course, there is a thistle on the cover of the US and Canadian editions of OUTLANDER.  Very appropriate! <g>

2) The sgian dubh is a small knife, traditionally worn in a Highlander's stocking.  The photo above shows a reproduction of a late-18th-century sgian dubh, with a 3 1/2-inch blade.


"Jamie,” I said. My voice was hoarse with sleep and swallowed tears. “Jamie. I want you to mark me.”

The tiny sgian dhu he carried in his stocking was lying within reach, its handle of carved staghorn dark against the piled clothing. I reached for it and handed it to him.

"Cut me,” I said urgently. “Deep enough to leave a scar. I want to take away your touch with me, to have something of you that will stay with me always. I don’t care if it hurts; nothing could hurt more than leaving you. At least when I touch it, wherever I am, I can feel your touch on me.”

His hand was over mine where it rested on the knife’s hilt. After a moment, he squeezed it and nodded. He hesitated for a moment, the razor-sharp blade in his hand, and I offered him my right hand. 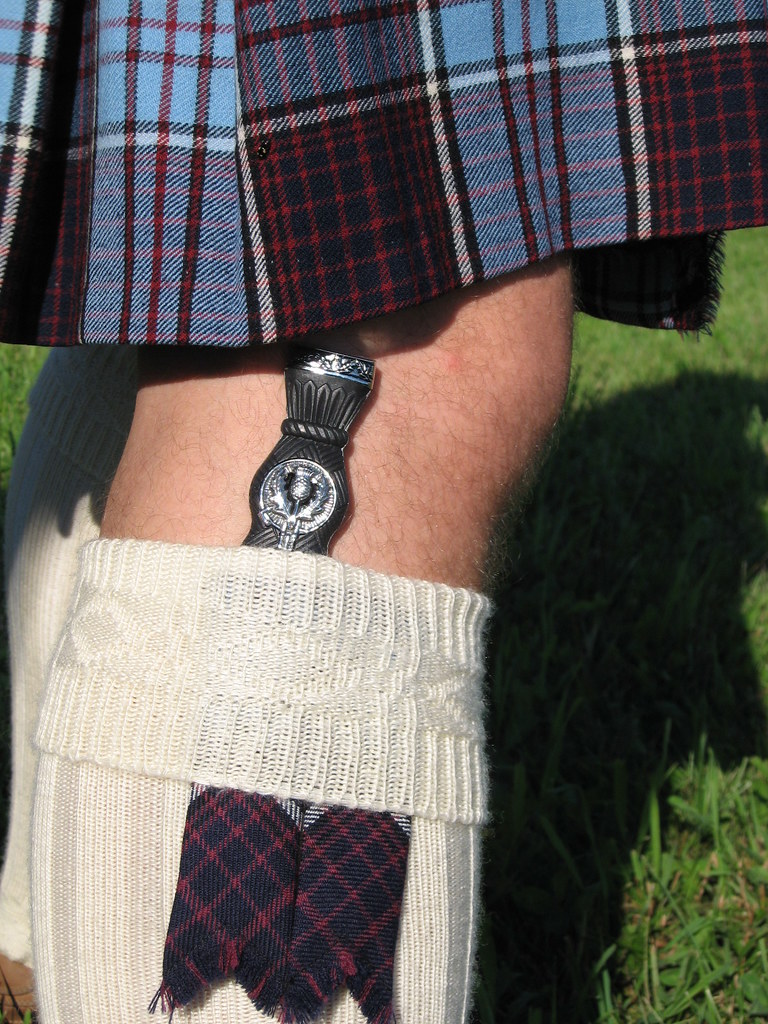 This photo shows how the sgian dubh is traditionally worn, tucked inside the stocking. (Photo credit: M&J Hos, on Flickr.)  For more information, look here. 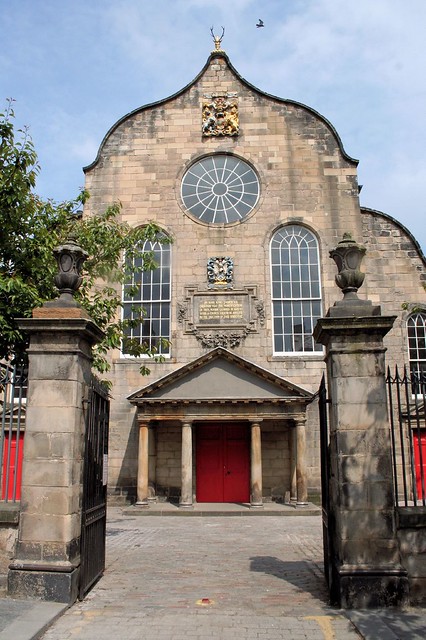 3) This is the Kirk of the Canongate, located near the Palace of Holyroodhouse in Edinburgh. (Photo credit: Son of Groucho, on Flickr.)  According to the kirk's website,


The Canongate kirkyard is the resting place of several Edinburgh notables including the economist Adam Smith, the philosopher and Smith’s biographer Dugald Stewart, Agnes Maclehose (the “Clarinda” of Robert Burns), David Rizzio, the murdered private secretary of Mary, Queen of Scots, and the poet Robert Fergusson, whose statue in bronze by David Annand stands outside the kirk gate. 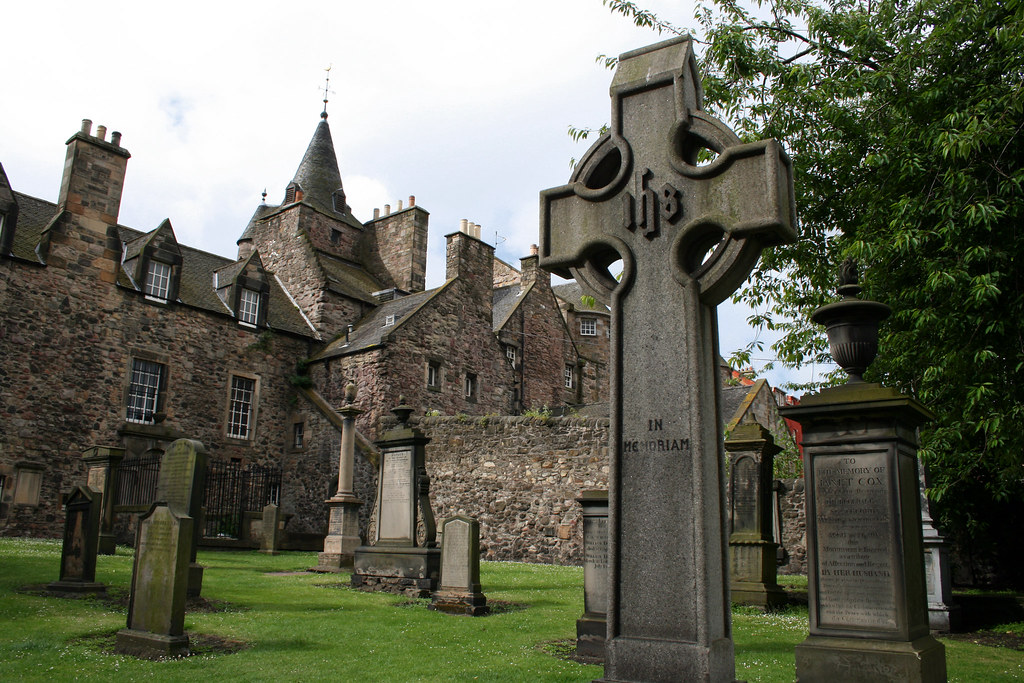 You may recall that Jamie and Claire encountered Colum MacKenzie there, shortly before Colum's death. (Photo credit: Oscar Palmer, on Flickr.)


We found Colum in the kirkyard, sitting on a stone bench where the late afternoon sun could warm his back. His blackthorn stick lay on the bench beside him, and his short, bowed legs dangled a few inches above the ground. Shoulders hunched and head bowed in thought, at a distance he looked like a gnome, a natural inhabitant of this man-made rock garden, with its tilted stones and creeping lichens.

4) This is John Loudon McAdam (1756-1836), a Scottish engineer and road-builder who invented a process for building a smooth, durable road surface, which became known as "macadam".


McAdam discovered that as long as the roadbed remained dry, it could handle any amount of traffic, in any kind of weather -- while wagon-wheels and horses' hooves constantly pressing crushed gravel into the road actually made it firmer and stronger. The macadamized road, as it became known, soon criscrossed most of England and parts of southern Scotland, as it allowed wagons and carriages to travel as fast as horses could pull them.

Remember Claire telling Jamie about this?


"The roads will be paved then; not cobbled, covered with a hard, smooth stuff--invented by a Scotsman called MacAdam, in fact.”

He grunted slightly with amusement.

“So there will be Scots in America, then? That’s good."

The modern word "tarmac", short for "tar and macadam", has its roots in McAdam's process.

This illustration shows a construction crew building the first macadam road in the US, in Maryland in 1823.

5) Here's "Flower of Scotland", performed by the Corries, circa 1975.  This song, Scotland's unofficial national anthem, was written by Roy Williamson of the Corries in 1967.  I love the scene in THE FIERY CROSS where Roger performs this song for the people on the Ridge.


It was a solemn song, that one, and melancholy. But not a song of grief, for all that; one of remembrance, of pride and determination. It wasn't even a legitimately ancient song--Roger knew the man who'd written it, in his own time--but Jamie had heard it, and knowing the history of Stirling and Bannockburn, strongly approved the sentiment.

"And stood against him,
Proud Edward's army,
And sent him homeward
Tae think again."

The Scottish members of the crowd let him sing alone through the verse, but voices lifted softly, then louder, in the refrain.

For more information about the historical background of the song, look here.  You can see the lyrics here.

Thanks again for all you do.... Had to half laugh/choke about the thistle ..... Have some in my yard that I have always hated and we can't seem to stop it's spread... Anyhow, when I read your descriptions I'm thinking... Can I learn to like this because of the "Outlander" books ?? Hope this gives you a chuckle !

Roger knew Roy Williamson? Nice one. It's likely must have been an audience of the Corries.
I had always speculated if the Corries themselves/Flower of Scotland might make some sort of appearance in Outlander because they lived in the same time and were really popular, but it was always a very big "what if" imagination. But I read this and whey-hey, Roy makes a sort of appearance after all!